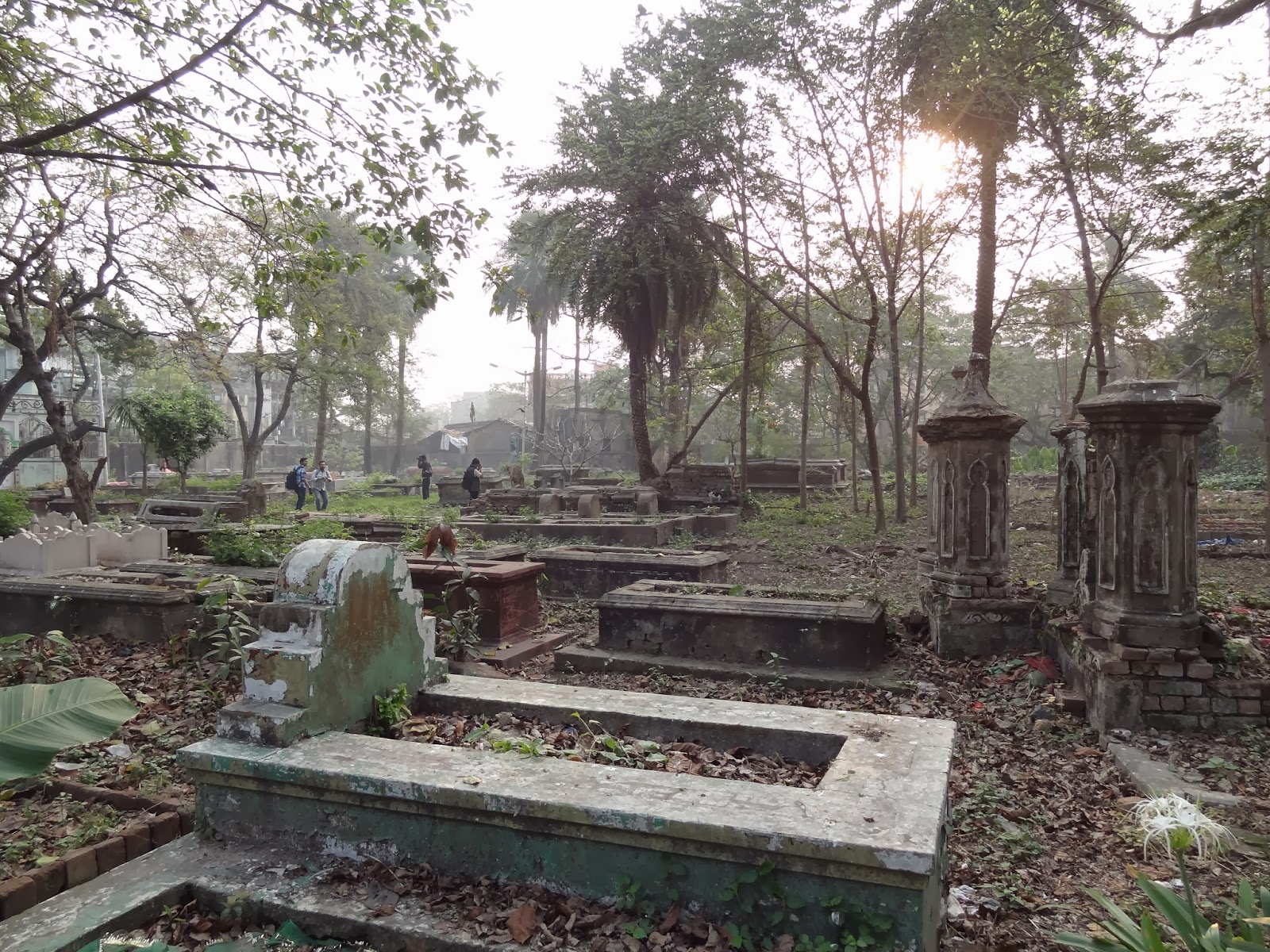 Located slightly north of Maniktala Market, on APC Road, on the right, is the Nakhoda Muslim Cemetery, also known as the Nakhoda Kabristan. Unfortunately, not many details are available about the cemetery, although the name Nakhoda would seem to suggest an association with the Kutchi Memon Jamaat, responsible for Kolkata’s principal mosque, in Chitpur. The word Nakhoda, means mariner; the Kutchi Memons were primarily sea-faring traders. The cemetery seems to be still active, as is proved by the graves of the Usmans, who were buried as late as 2011. 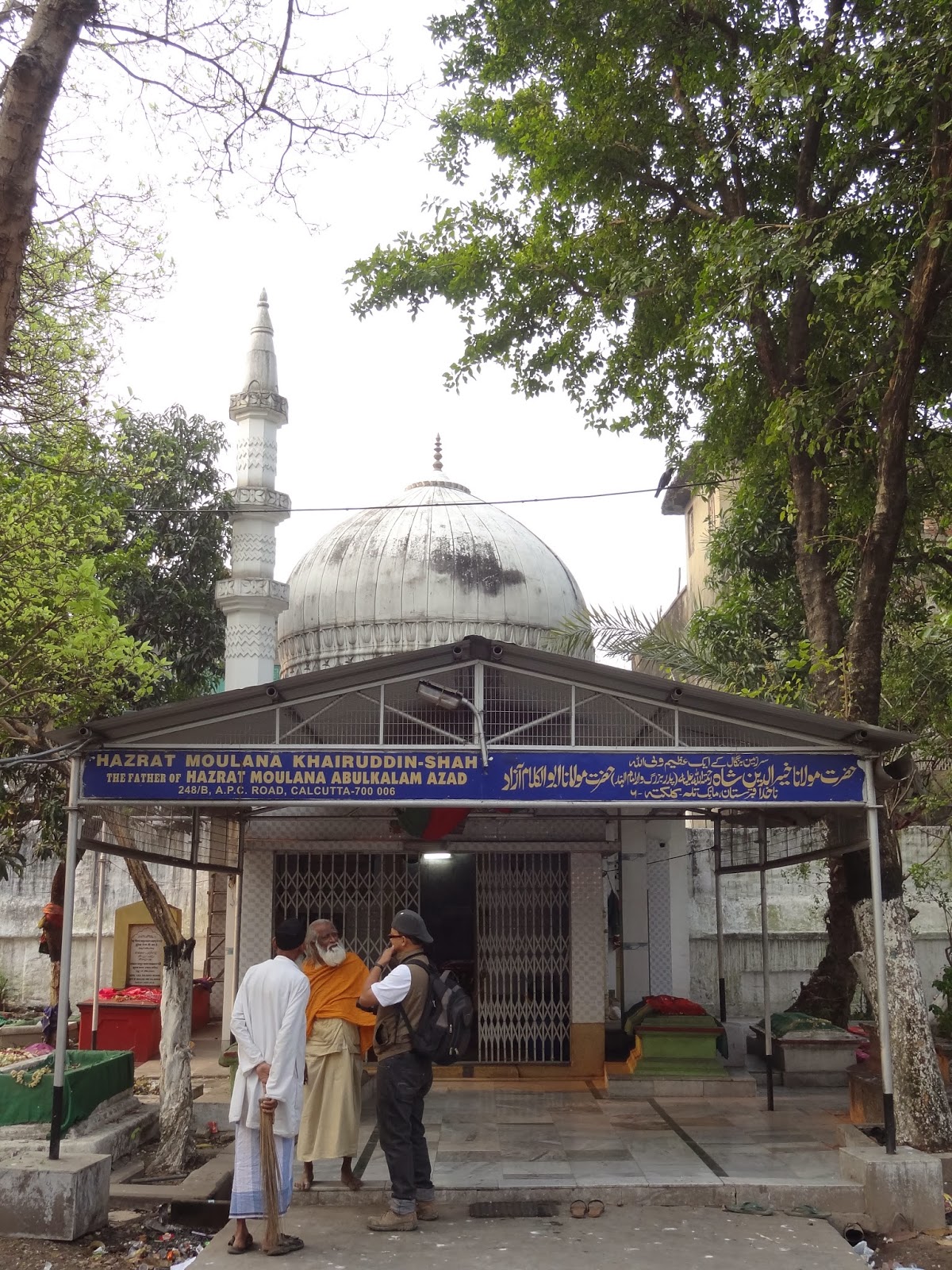 The cemetery overall is in an extreme state of neglect and disrepair. Apart from damage, the fact that very little English is used on tombstones and other markers, makes information very difficult to glean for anybody not familiar with Urdu/Farsi/Arabic. The principal attraction of the cemetery is the grave of Maulana Muhammad Khairuddin, who happens to be the father of Maulana Abul Kalam Azad, one of the principal leaders of the Indian independence movement. Maulana Khairuddin was a scholar, who married the daughter of a well-known Arab cleric in Mecca, where Maulana Azad was born.


On the grounds of the cemetery is also an ornate shrine, no details about which can be had from the plaques on it’s walls. 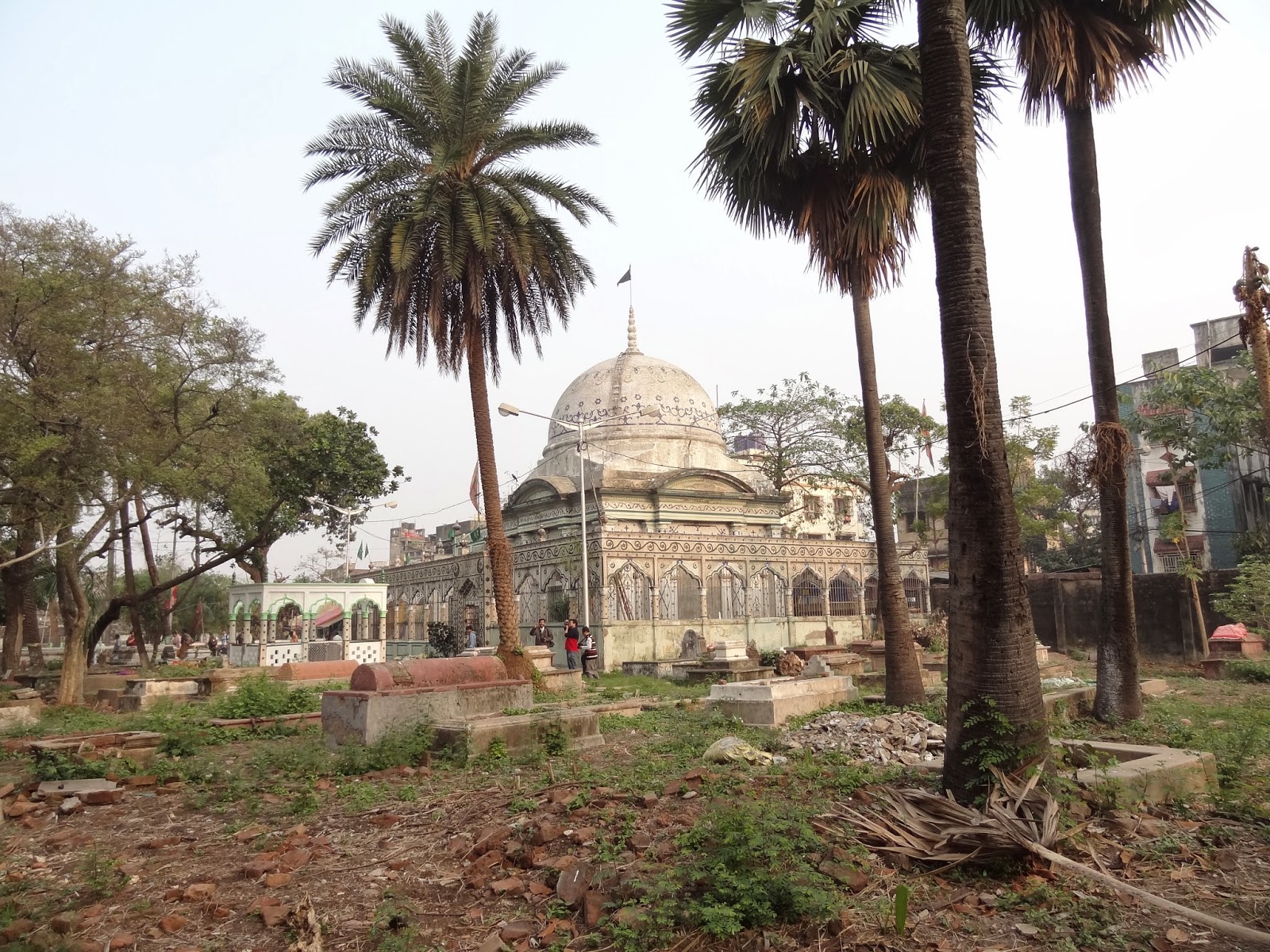 There are also some rather ornate tombs, such as this one. 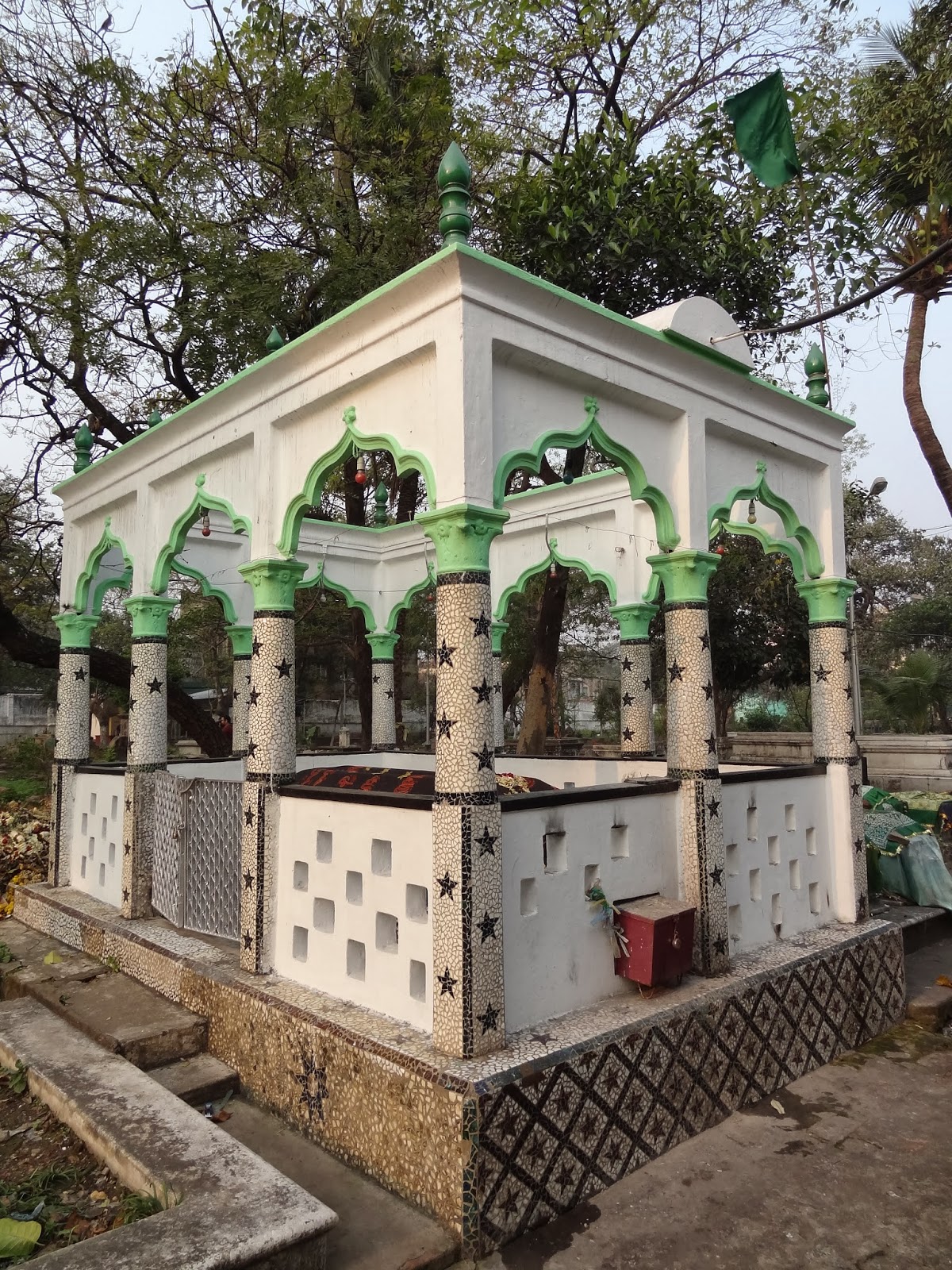 The grounds of the cemetery are now also used for processing scrap iron. 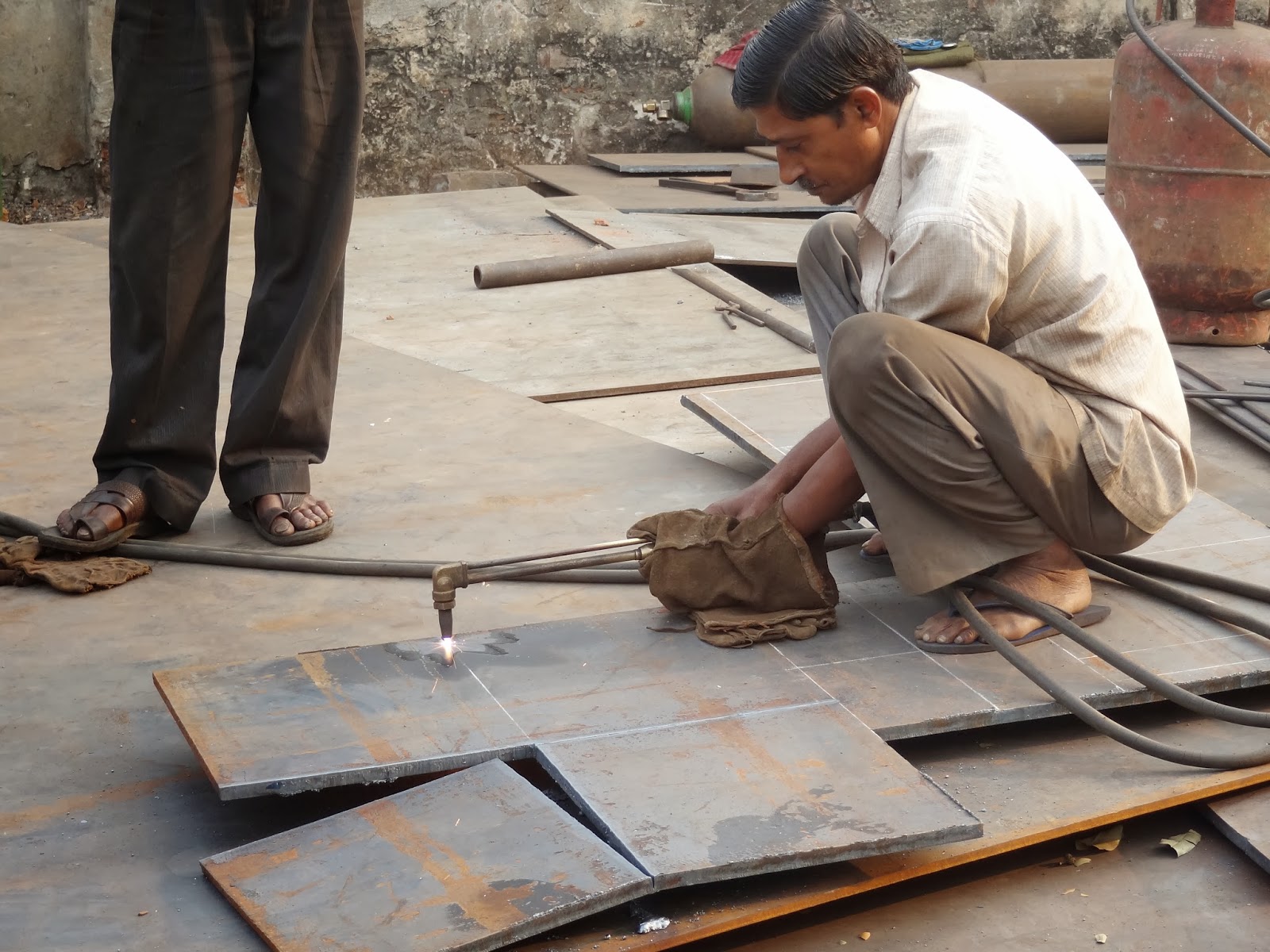 There is no restriction on entry and photography, and visitors are few.
Posted by Deepanjan Ghosh at 19:03 1 comment:

At the North-Western corner of Government House (Raj Bhavan) may be found Kolkata’s oldest surviving Anglican Church, St. John’s Church. The oldest Anglican Church of Calcutta was St. Anne’s, which was located roughly where the principal rotunda of the Writers’ Building stands today. This was completely destroyed in the Seige of Calcutta, in 1756. St. John’s was built 1787, and with the advent of Bishop Middleton, Bishop of Calcutta, became the principal Anglican Cathedral of Calcutta. It remained so till the consecration of St. Paul’s Cathedral in 1847. The land on which St. John's is built was originally a burial ground, known as the "old burial ground", in use ever since Charnock's party set up base in Calcutta. The old burial ground had been closed since 1767. The land was the property of Maharaja Nabo Krishna Deb, founder of the Shovabazaar Raj family. It was "presented" by him to Warren Hastings, in 1783. All the graves were dug up and the remains removed. The only graves to have been left undisturbed were those of Job Charnock and Admiral Watson. Some of the gravestones were laid around Charnock’s mausoleum.  More than Rs. 70,000.00 was raised for the Church’s construction through donations and lottery. The Church was designed by Lieutenant Agg of the Bengal Engineers, on the lines of St. Martin in Fields in London, but with design modifications to accommodate for the soft ground. Sandstone from Chunar was used for the steeple, while blue marble from the ruins of Gaur was used for the flooring. The use of stone is what gave St. John’s it’s native nickname, “Pathure Girja” or Stone Church.  The Church was consecrated on the 24th of June, 1787, the date being that of the Nativity of St. John the Baptist. The church was used for baptisms and weddings of the who’s who of Bengal’s British folk at one time. In 1798, merchant and Calcutta Sheriff William Fairlie, from whom Fairlie Place got its name, married Miss Margaret Ogilvie here.

My paternal grandmother, the recently deceased Smriti Ghosh had a very interesting maiden name. It was Mitra-Mustafi. Now Mitra is a Hindu surname. Mustafi is a title, and I am led to believe this title was given them by none other than Emperor Aurangzeb. The Mitra-Mustafis were accountants or treasurers to the kings, and made quite a fortune. Unfortunately almost all the magnificent houses they had constructed are now completely in ruins. What survives in very decent shape are several temple complexes built by them within their fortified place of residence.

A local train brought us to Hoogly station, from where a pre-booked car took us to Sakharia, Somra Bazaar. With the help of (very confusing) directions from locals, our tour began with what the locals call “Biswas Bari”. 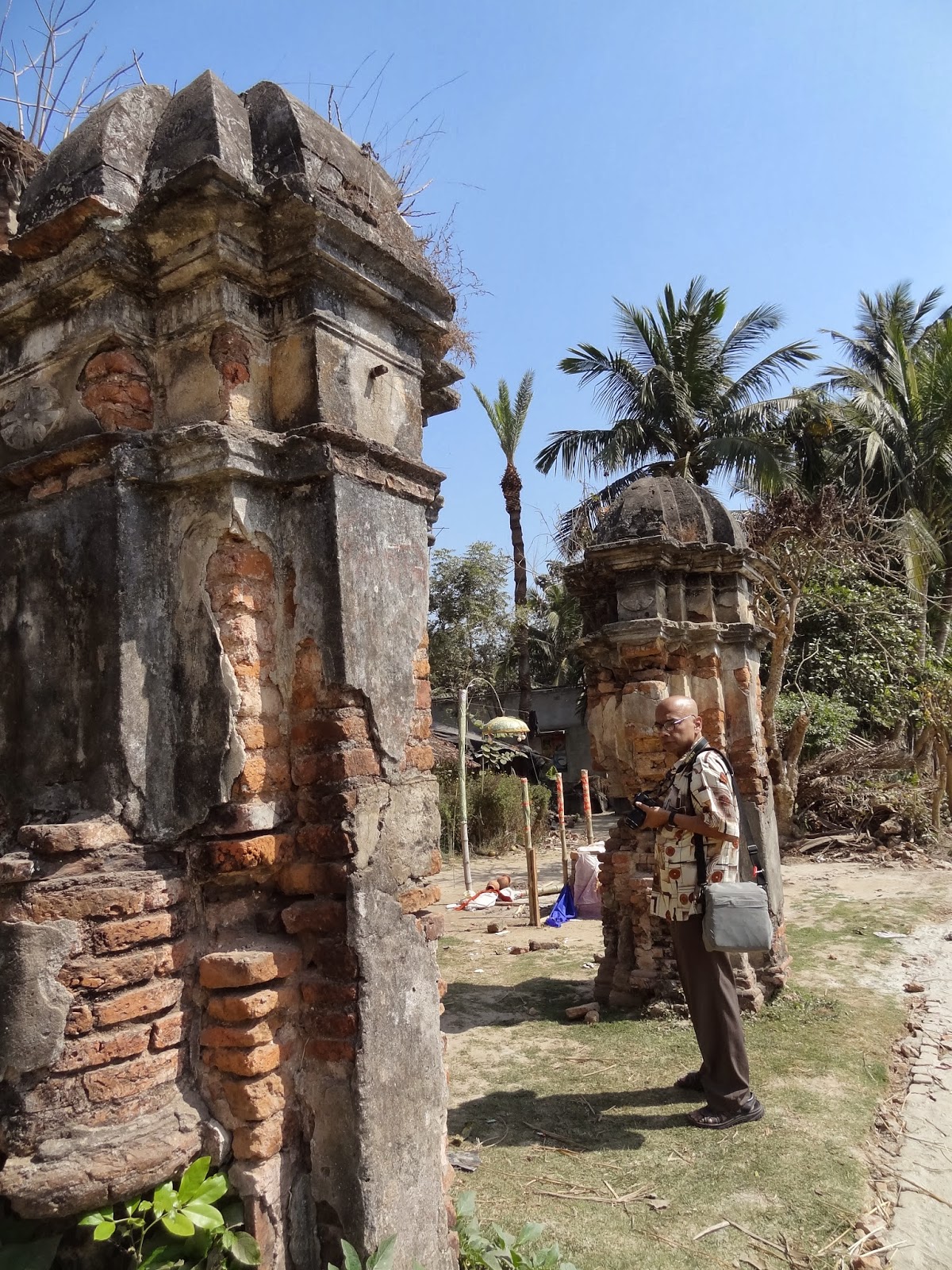 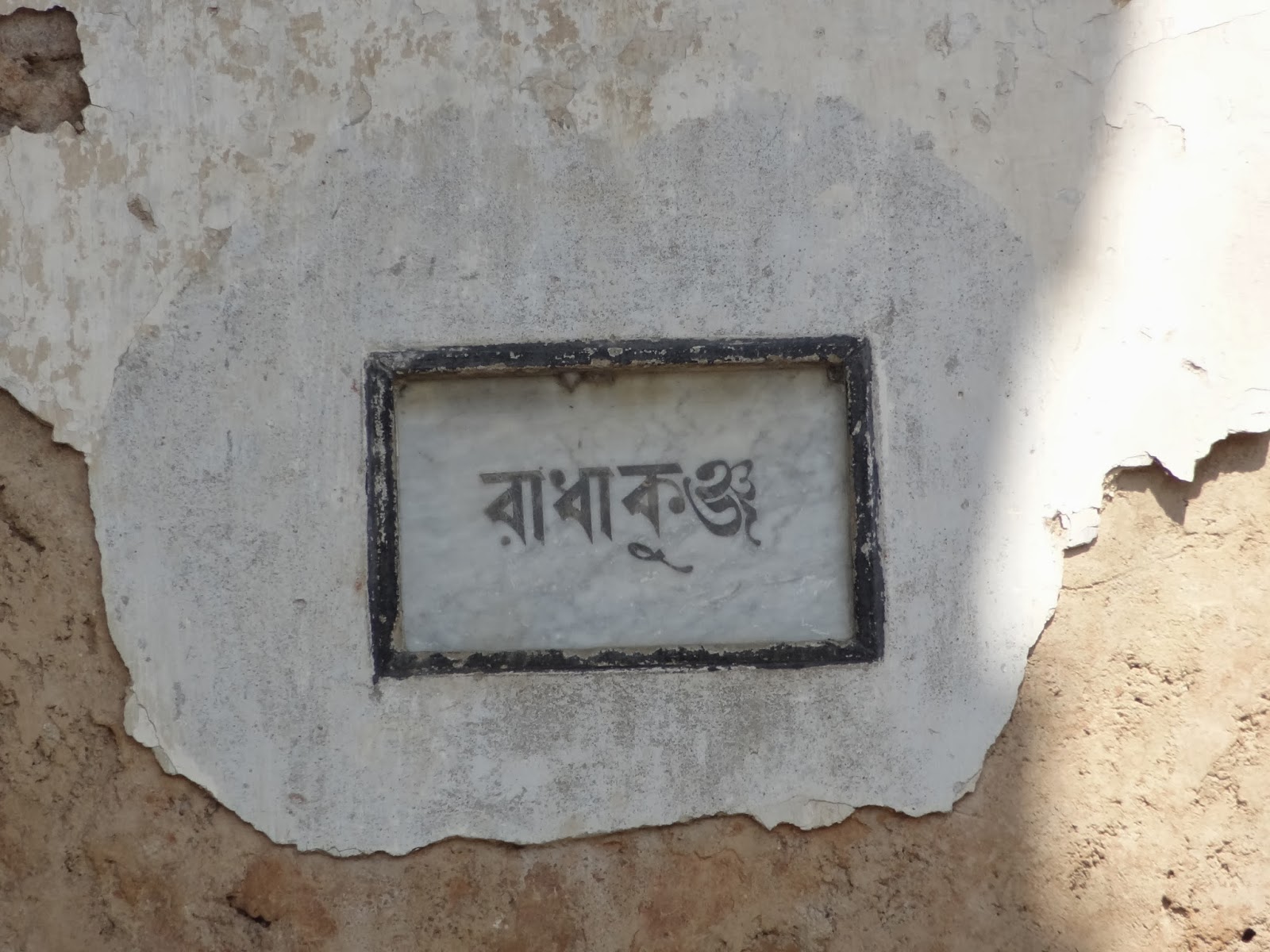 This is in fact, the home of Radhajivan Mitra-Mustafi. It is in a completely ruined state now. No members of the family live here, and a family of caretakers of the nearby Anandamayee temple inhabit the small portion of the house that remains habitable. 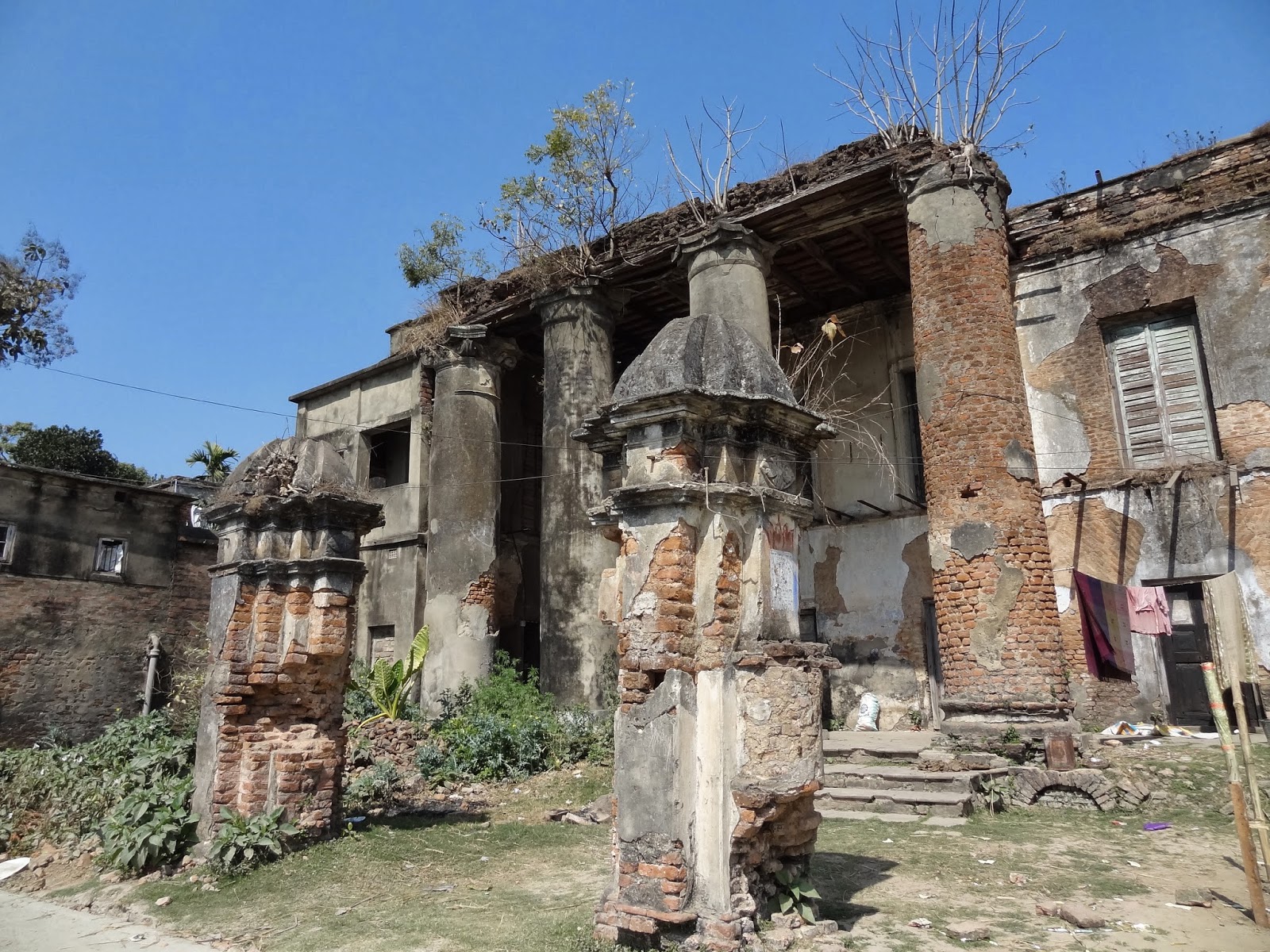 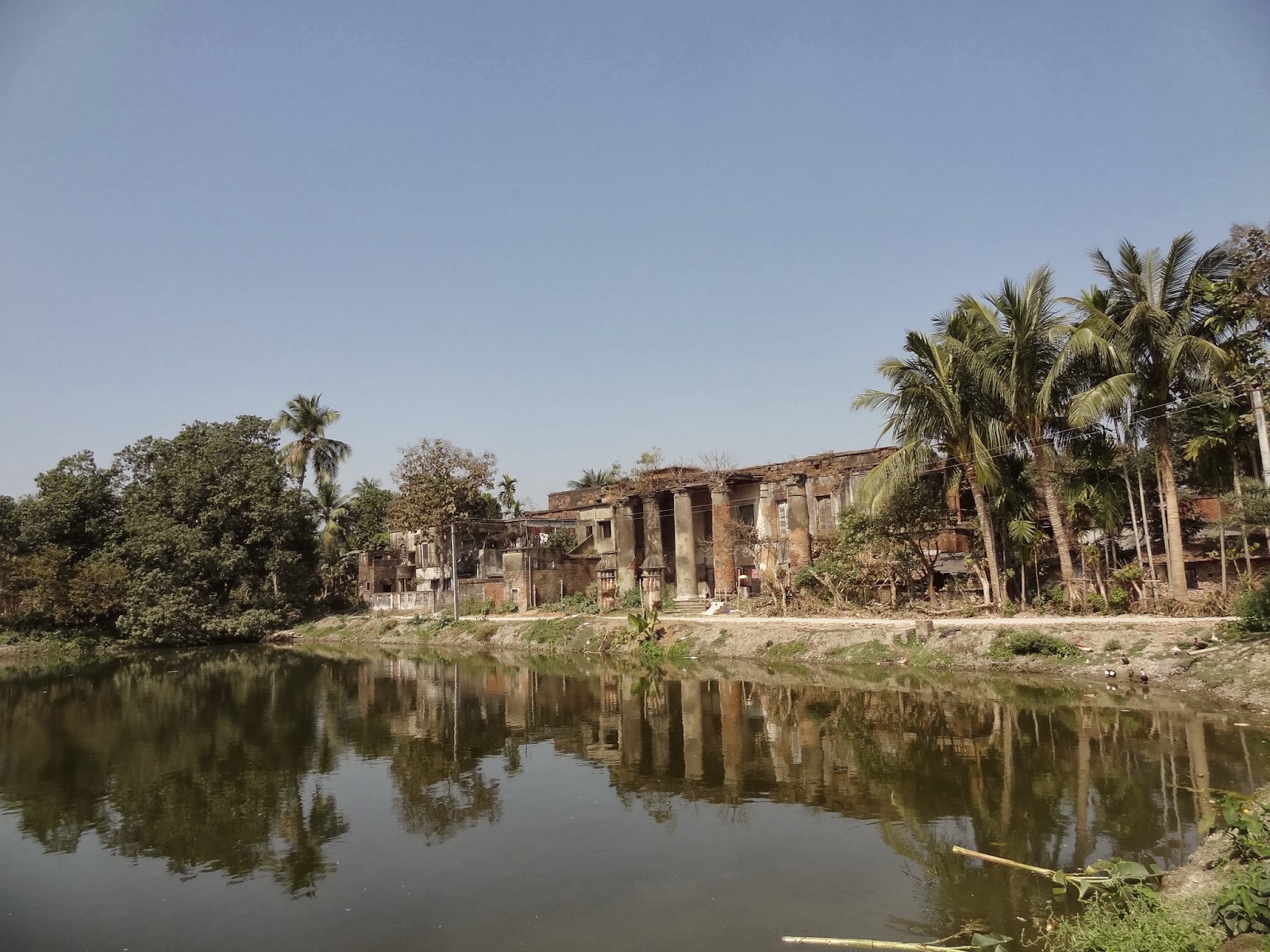 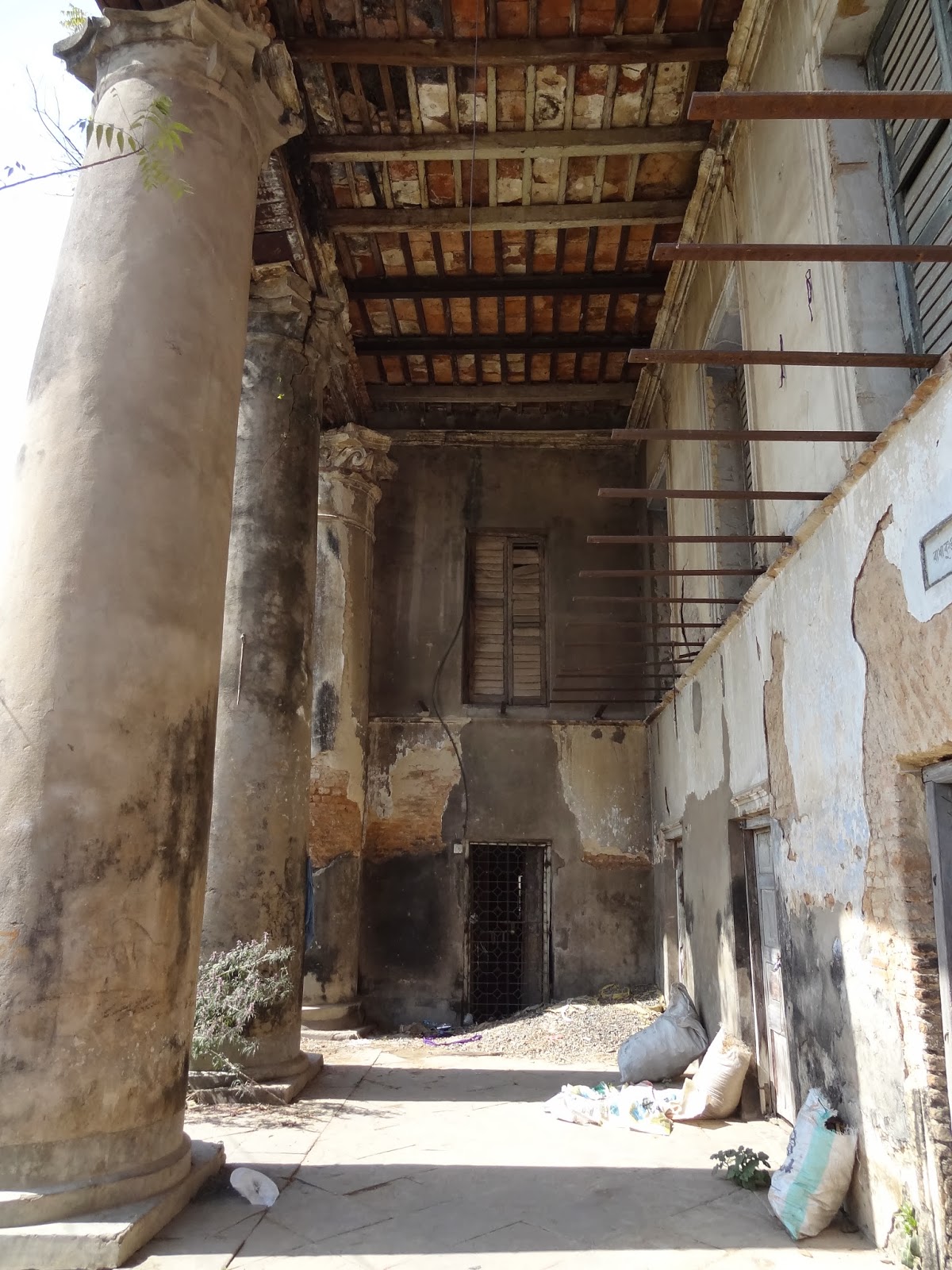 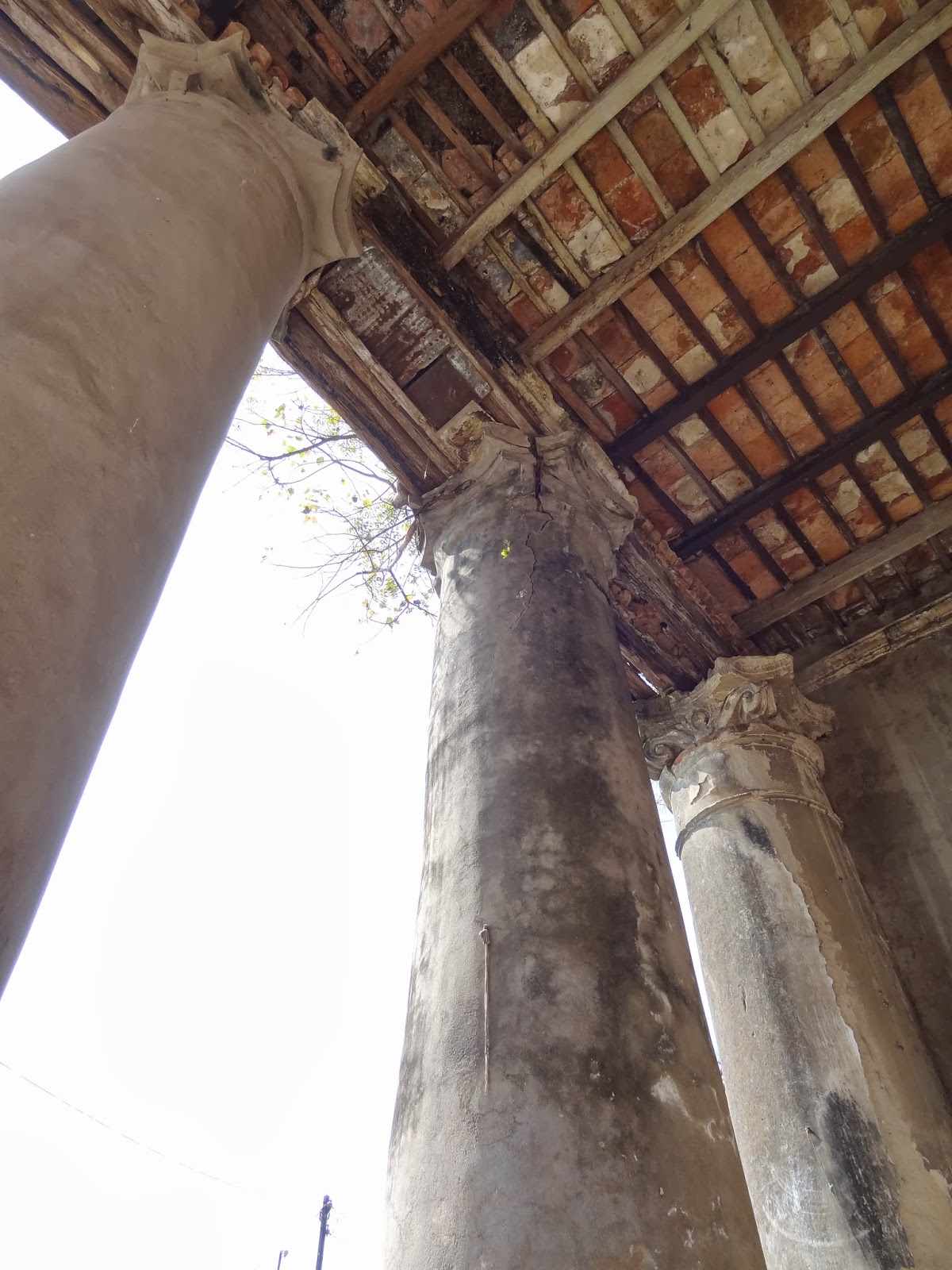 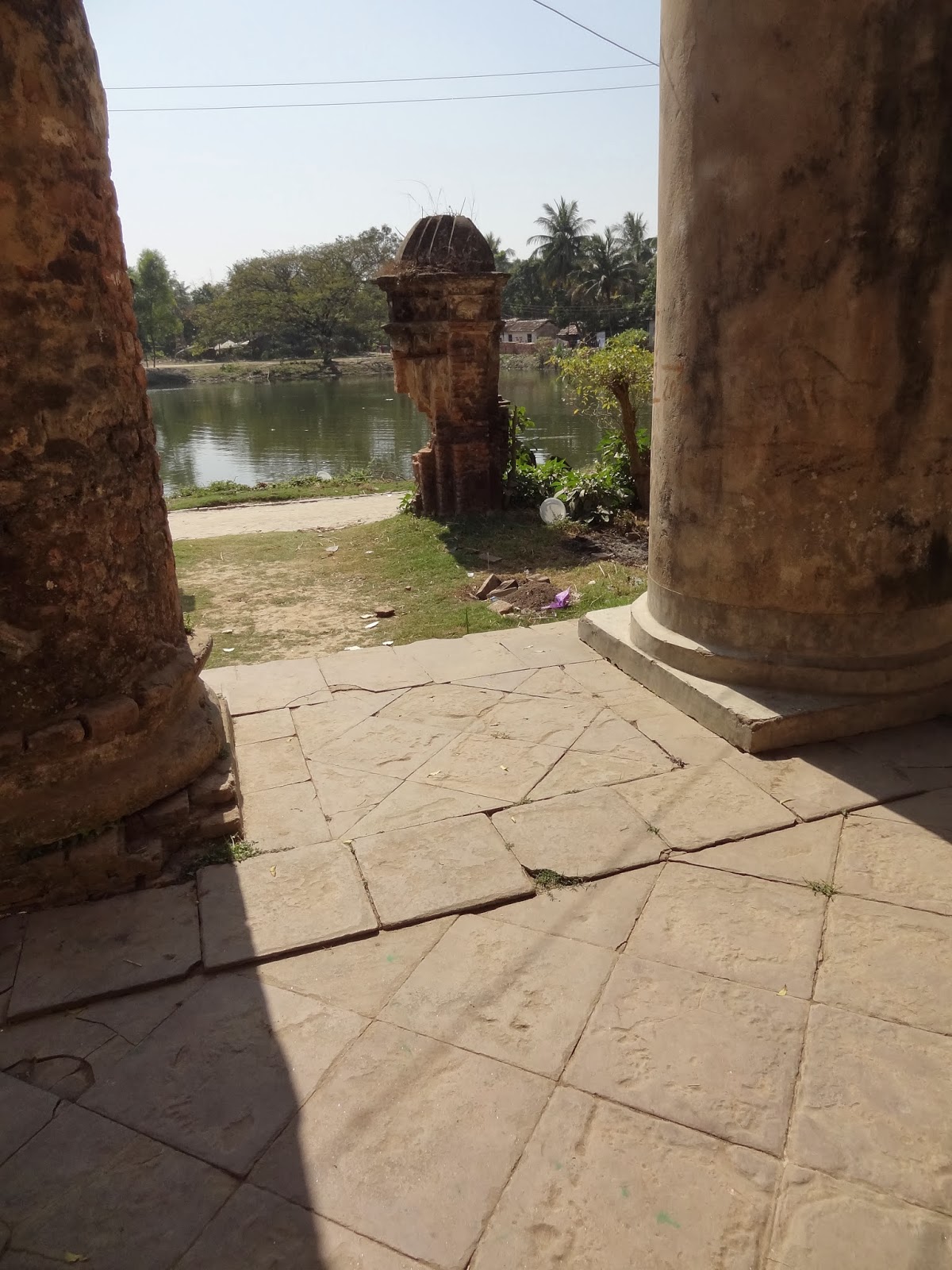 The Anandamayee temple complex was constructed around 1813 by Bireswar Mitra-Mustafi. The complex is open to all, and the temples themselves are in surprisingly good shape, although some have settled and tilted at odd angles. My father tells me that the Birlas had, at one point, provided financial aid for the restoration of the the temples. The Mitra-Mustafi family have set up a trust that looks after the temple now. 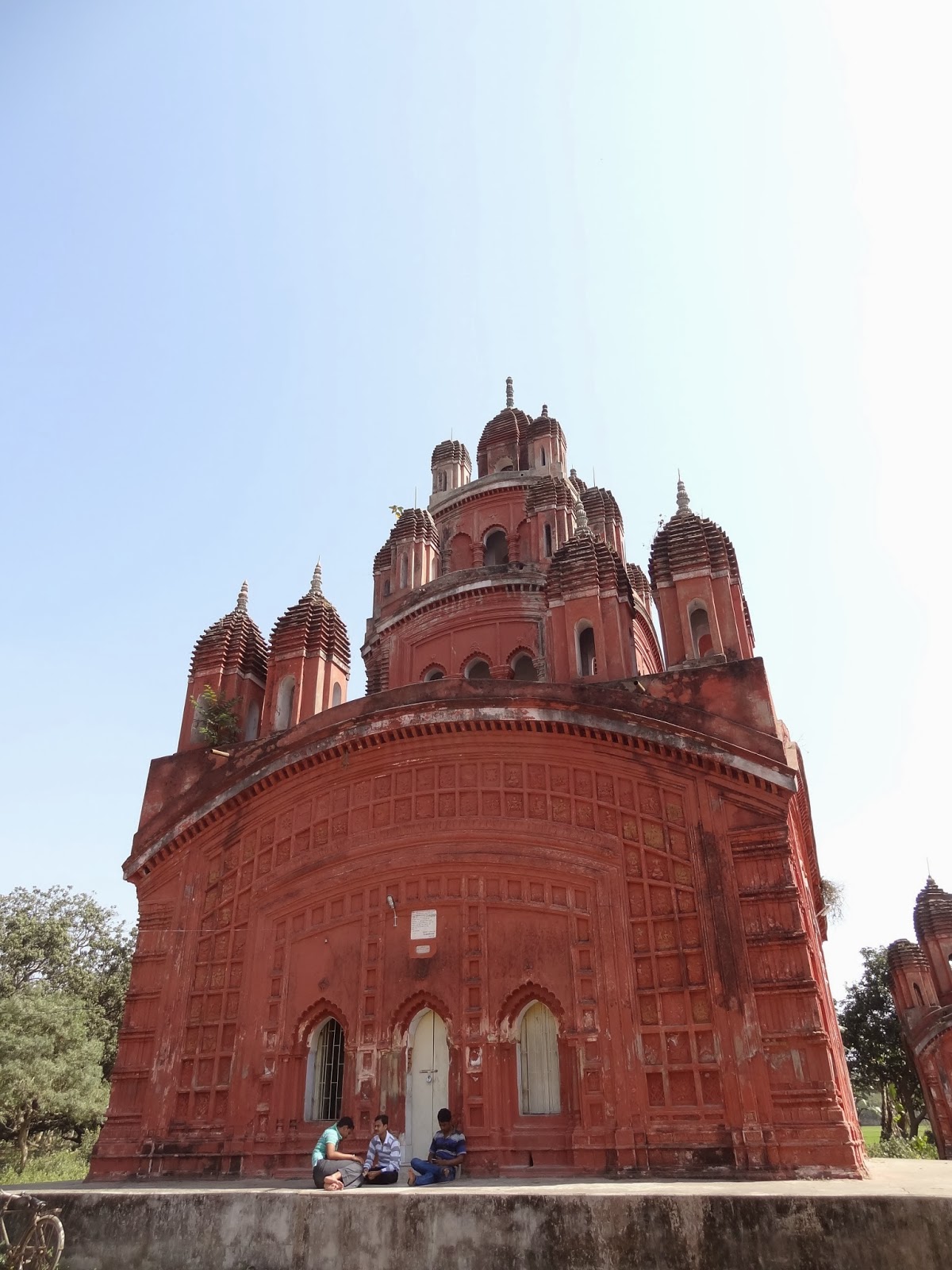 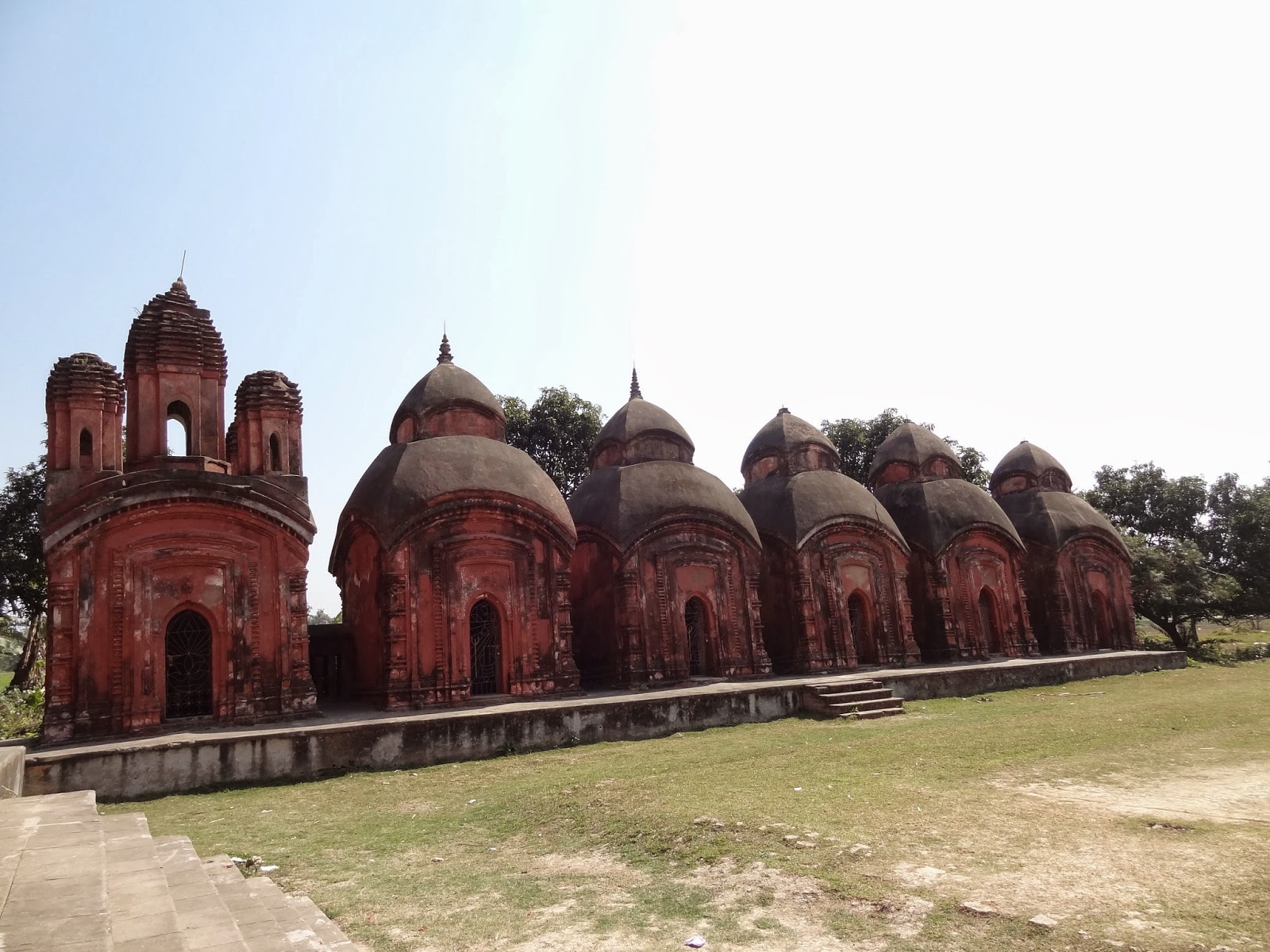 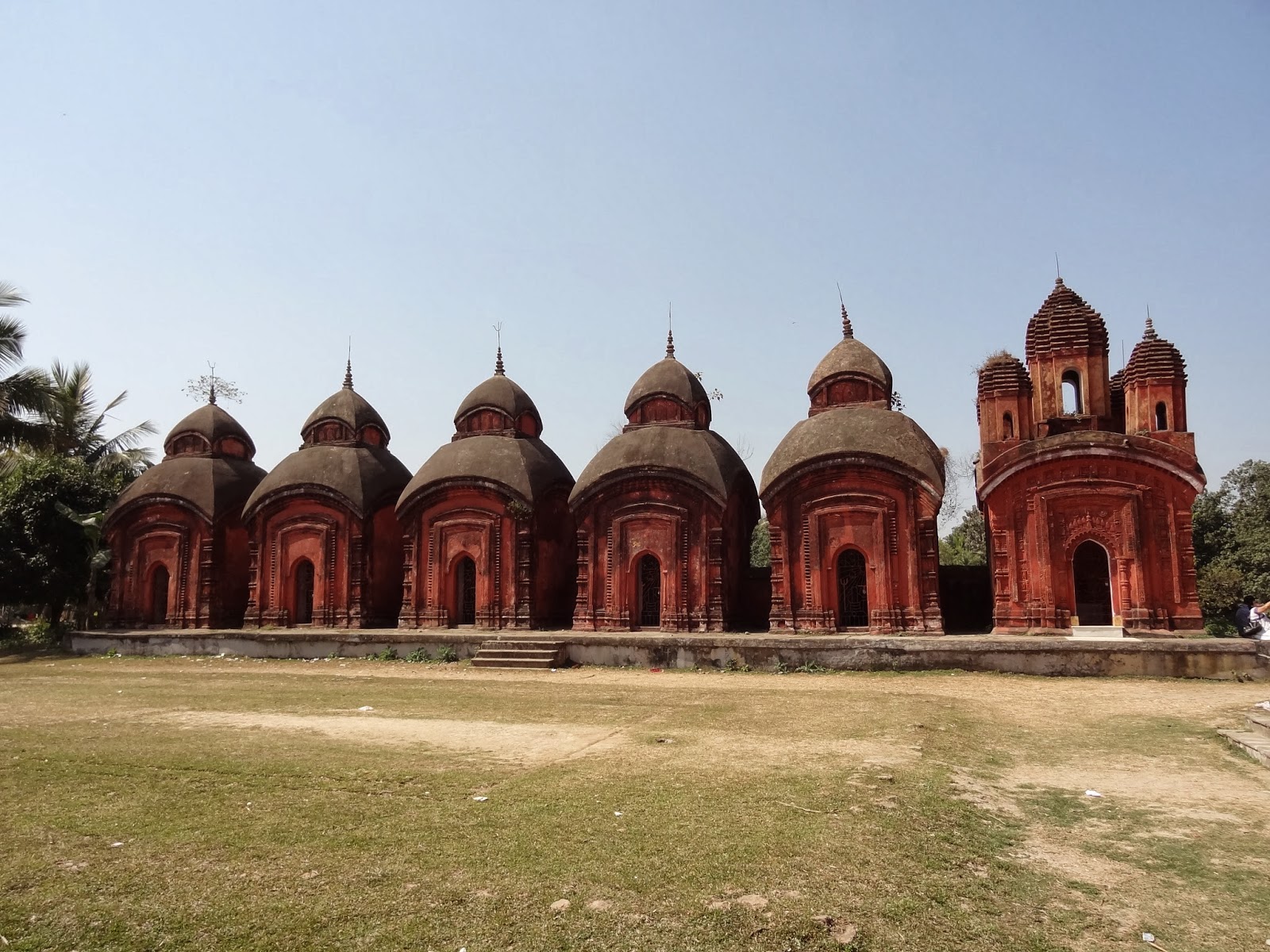 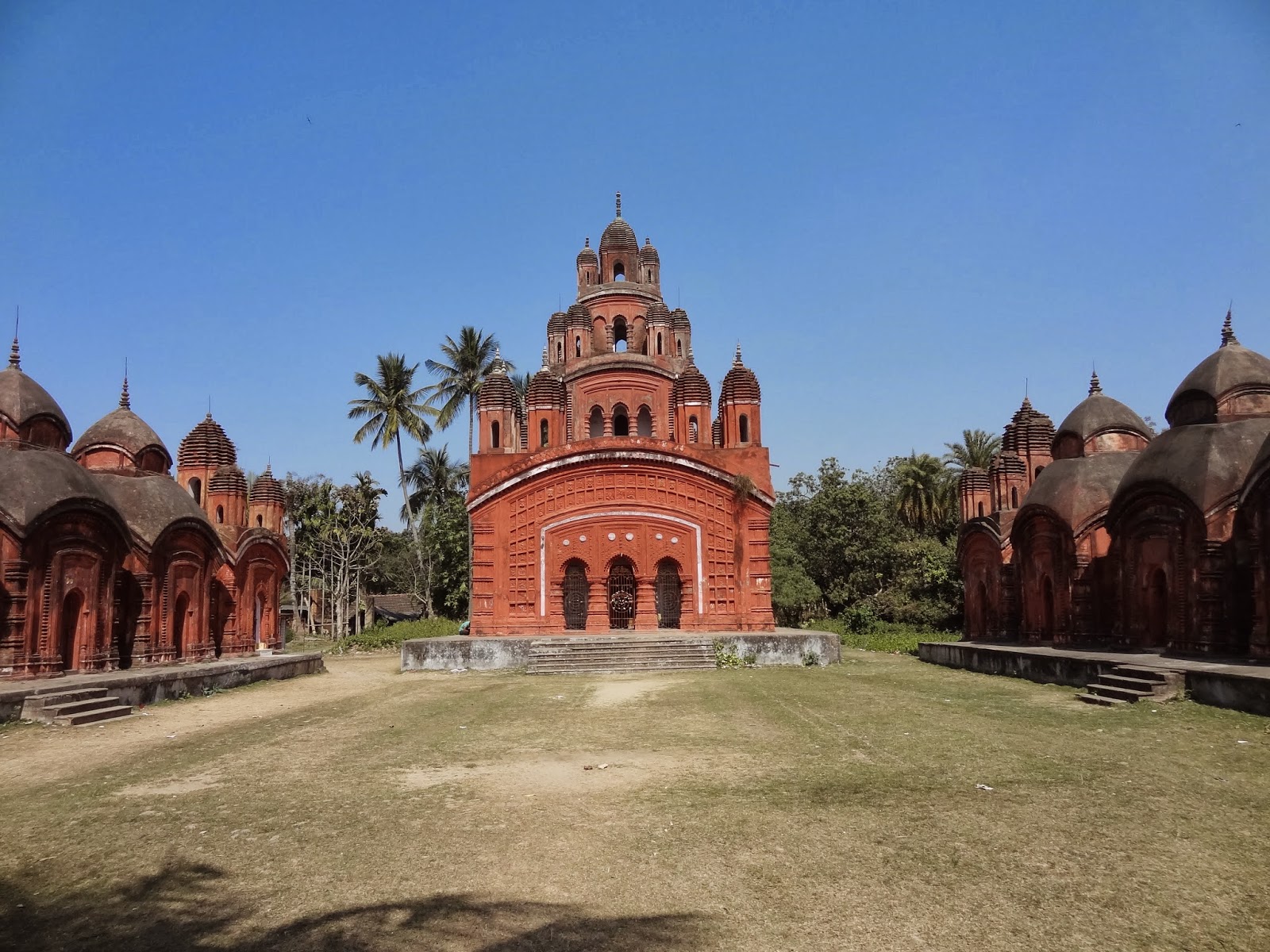 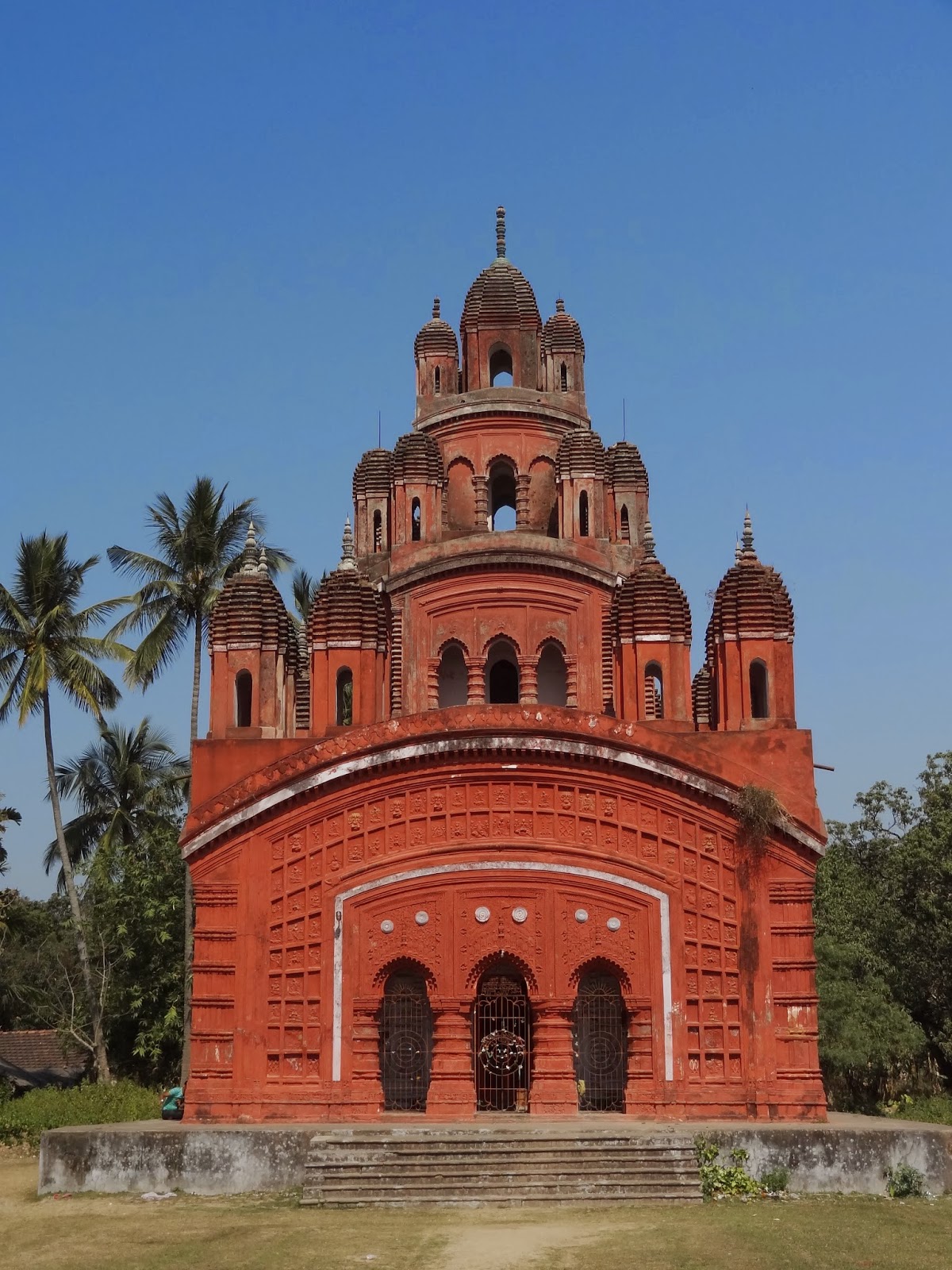 Next in line, the “Thakurdalan” of Lakshmidas Mitra-Mustafi. Again in a completely dilapidated state, photographing this relic can prove to be quite a challenge, since the present resident, who claims to be from the Mitra-Mustafi family, is clearly not in complete possession of his senses, is extremely aggressive, ill-mannered, and attempts to prevent photography of any kind. I was lucky enough to take a few snaps when he was not around. His neighbours tell me that they do not speak to him, since all he does, they say, is quarrel and sue, in court, for the smallest reasons. 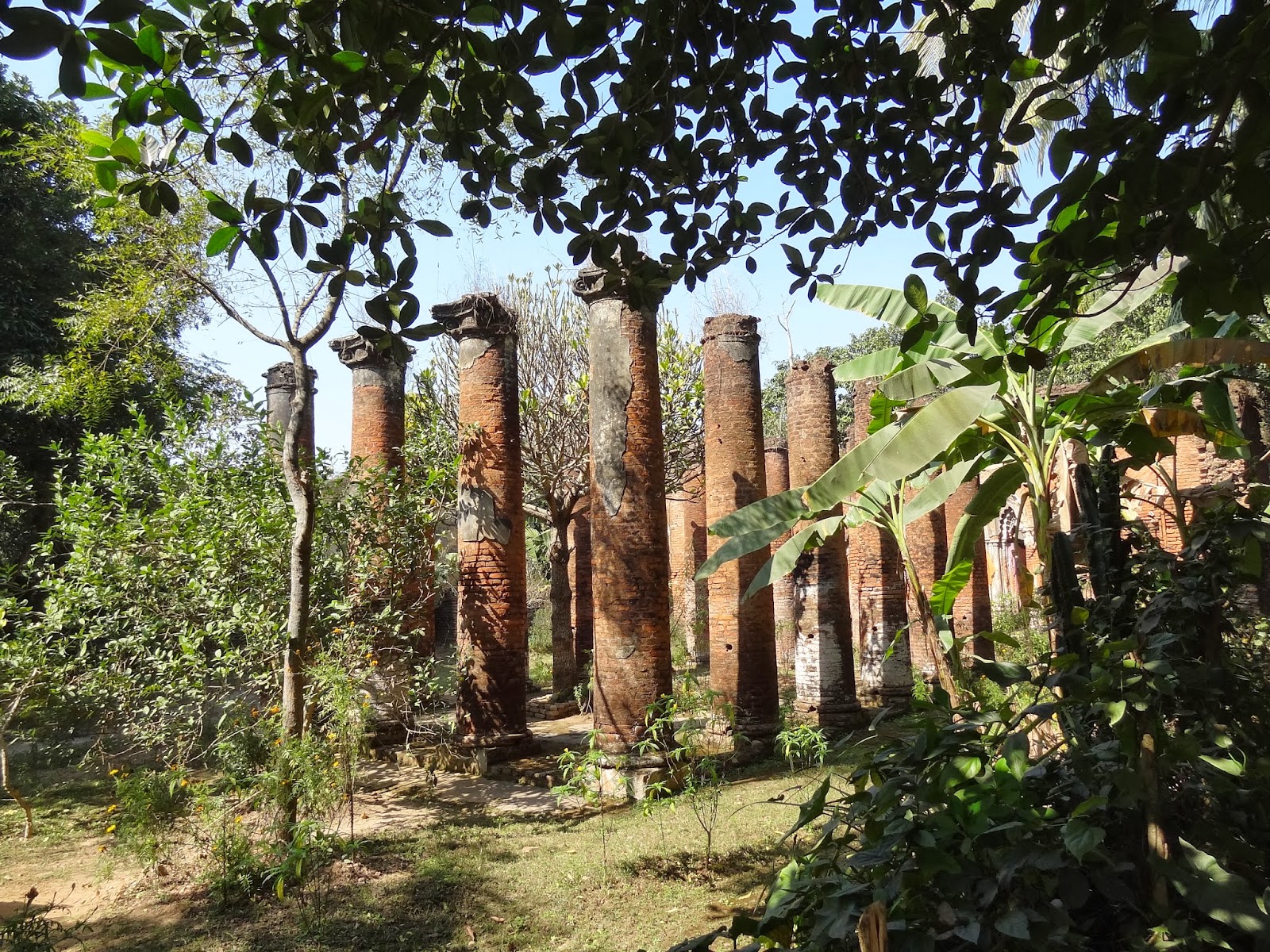 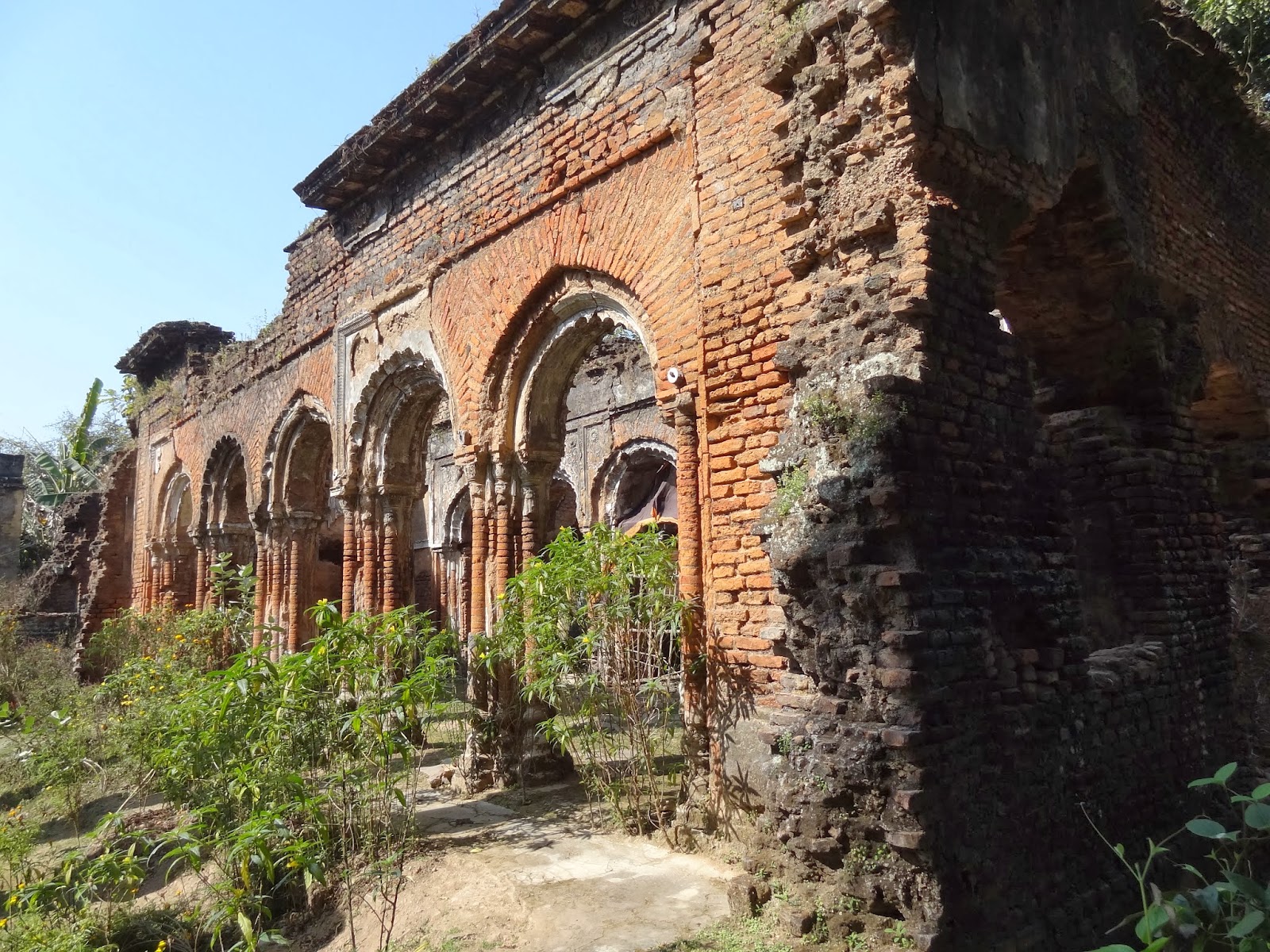 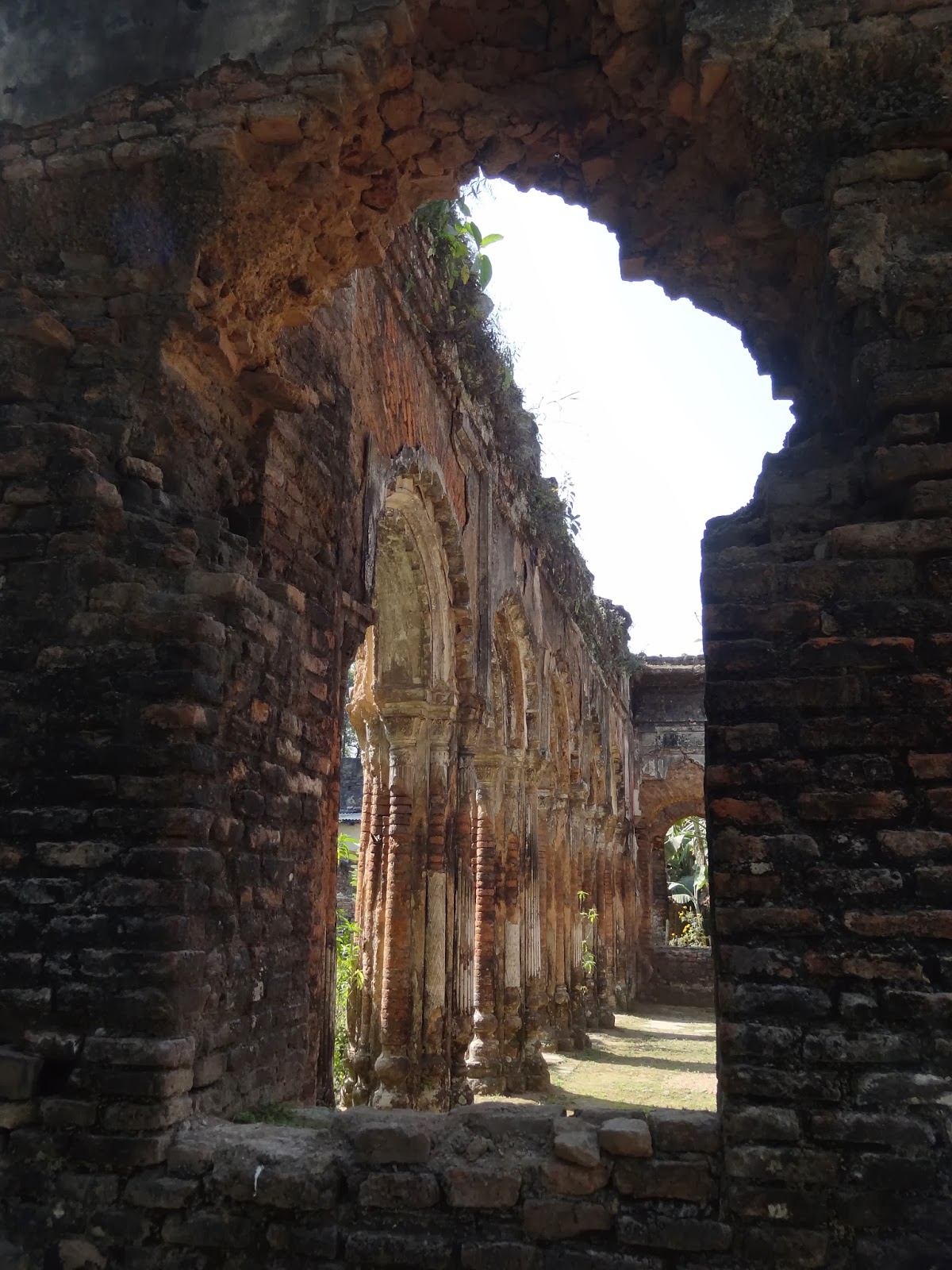 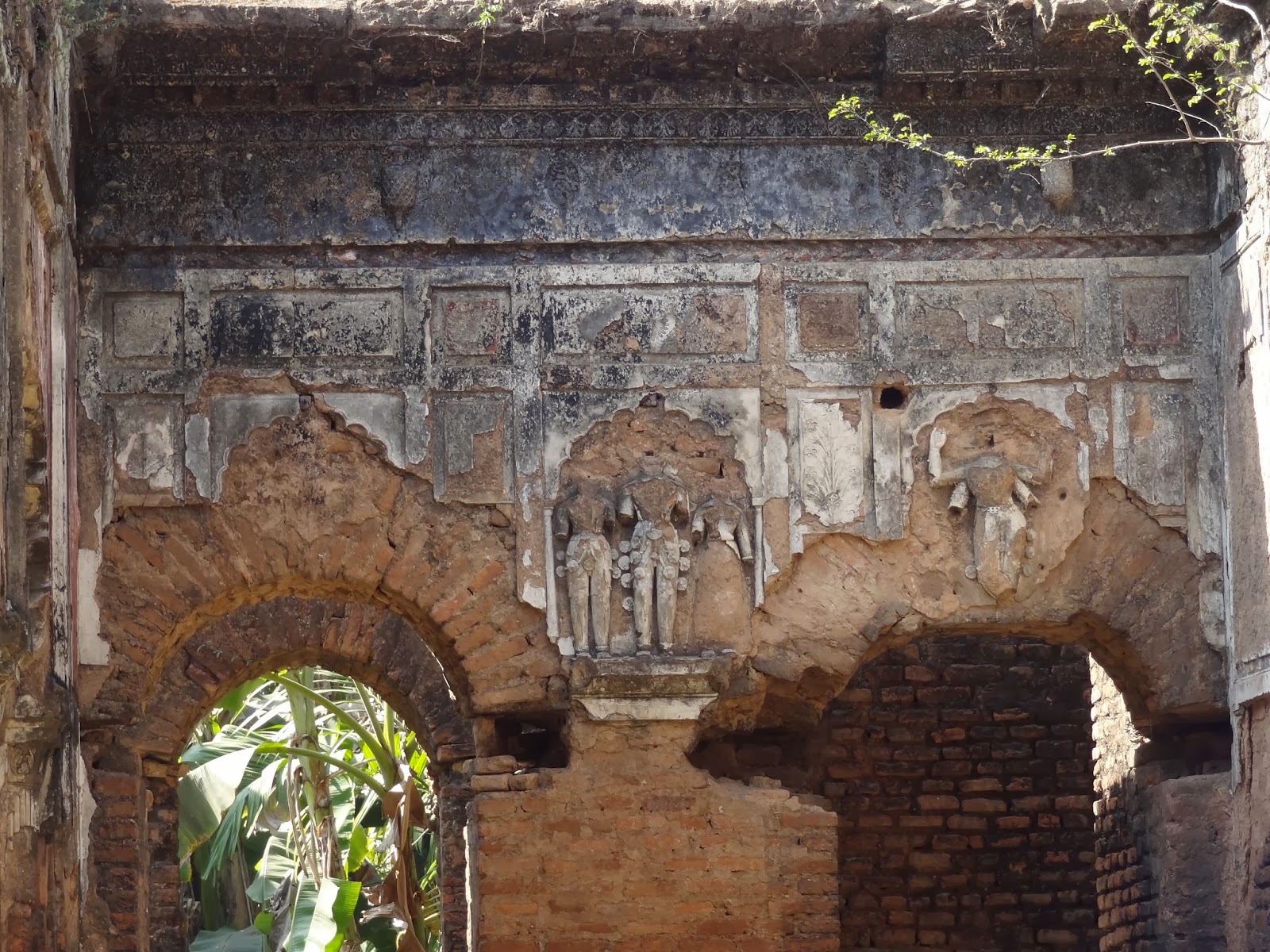 Two more temples have recently been completely restored by the Mitra-Mustafi family. The first of them is the Harasundari temple, constructed around 1814 by Ramnidhi Mitra-Mustafi. 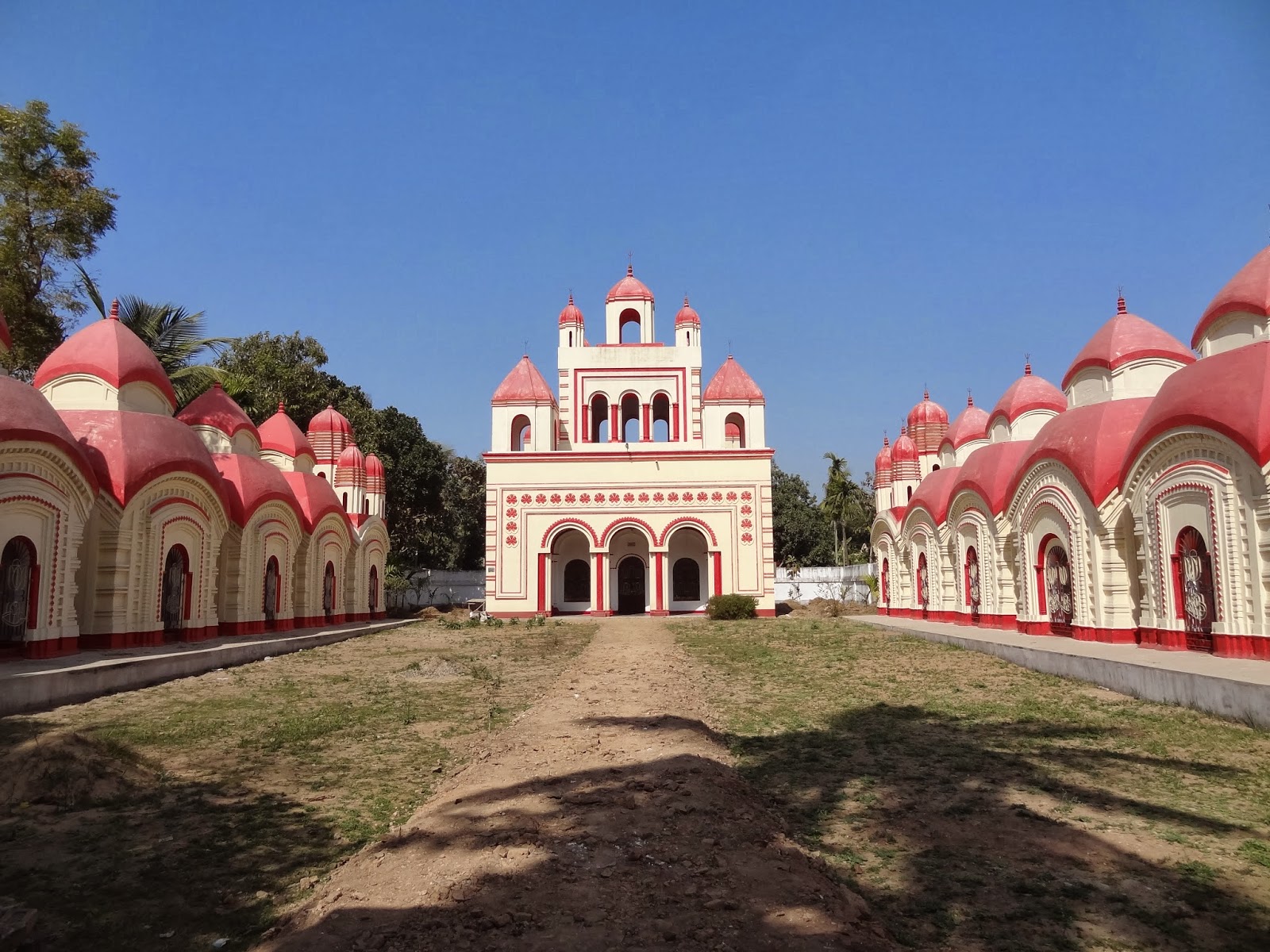 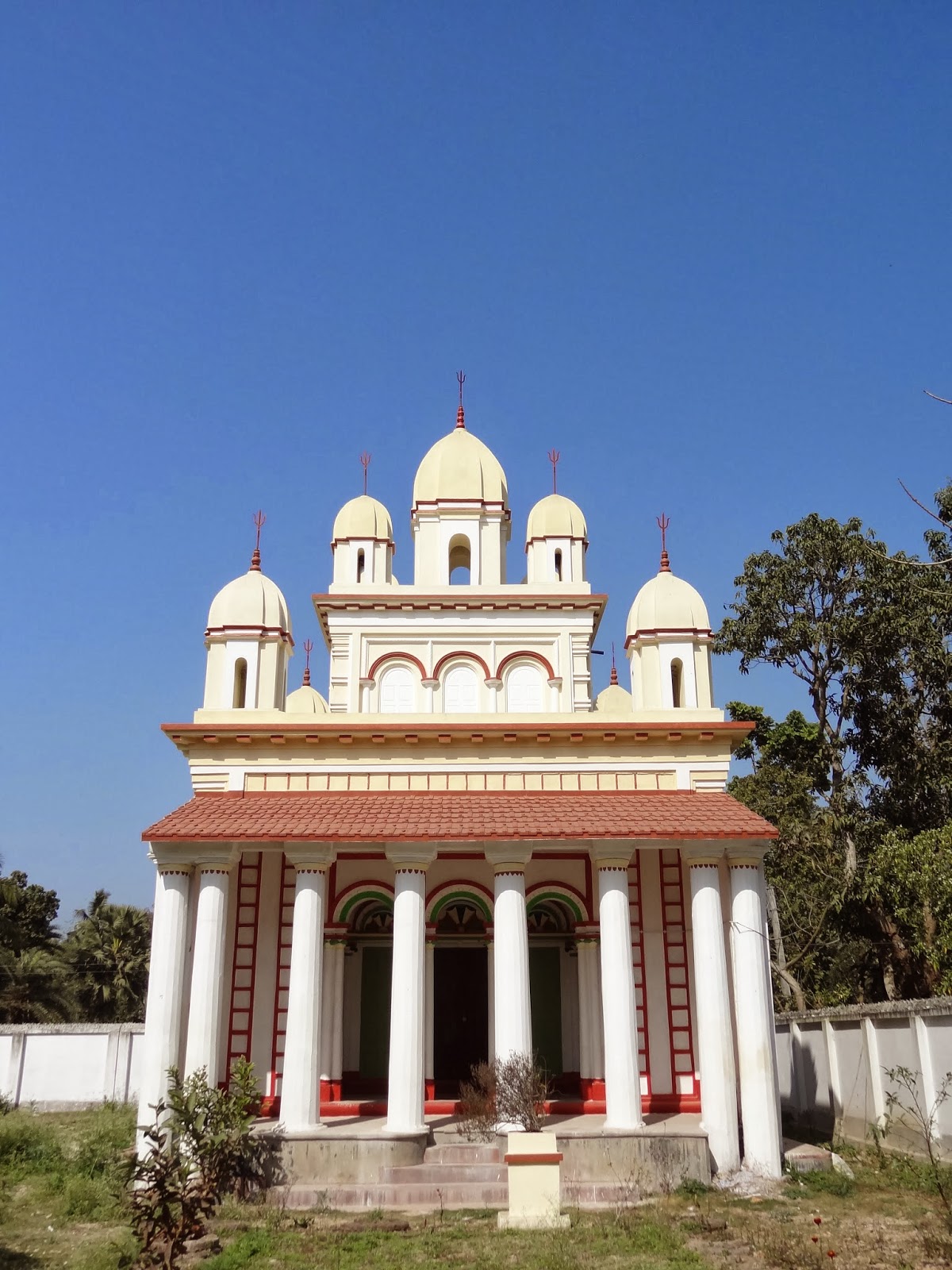 Marble plaques around the Harasundari temple have the history and family tree of the Mitra-Mustafis. Unfortunately a long history of family feuds has ensured that I am not in touch with any of these people. For further information, please refer to their facebook page, and do have a look at this interesting blog post by Rangan Datta.

Posted by Deepanjan Ghosh at 00:06 No comments: