For the last leg of our 2014 trip to North Sikkim, our travel agent suggested that we try the Mayal Lyang homestay in Dzongu. Bordered by the Teesta River in the south-east, Tholung Chu River in the north-east and by rising mountains in the west, Dzongu is a forested mountain valley that is a reserve for the Lepcha people. The Lepcha are the indigenous people of Sikkim, with their own language and script, distinct culture and cuisine and are mostly Tibetan Buddhist. Our hosts were Gyatso and Samsay Lepcha, and their family. 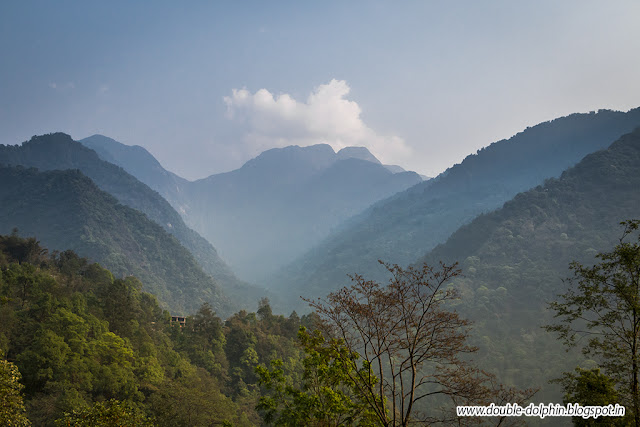 My friend Prasenjit and I had never lived in a homestay before, but had some idea of what things would be like. Gyatso spelt out the ground rules for us after we arrived. No smoking anywhere in the village, the family would not do our laundry, no ceiling fans in any of the rooms, and as is Lepcha custom, no attached bathrooms. To be honest, we always carry enough clothes on trips to ensure that the laundry service is not needed, we had not found a single ceiling fan anywhere in North Sikkim so were used to the idea, and the bathroom and smoking bits were not going to be a problem. Gyatso took us around, showing us the Mayal Lyang village and as we sat down to watch a game of soccer, I popped the most important question; what was Lepcha food like? “In Lepcha food you will find a lot of rice, a lot of pork, a lot of beef, and alcohol”, Gyatso said. Prasenjit gave me a smirk. “This is exactly what you were hoping for, isn’t it”? Indeed it was. “What about Chhaang, the local alcohol?” I asked. Gyatso laughed. “You will get everything” he said, perhaps mildly surprised that city folks had heard of this Himalayan brew. 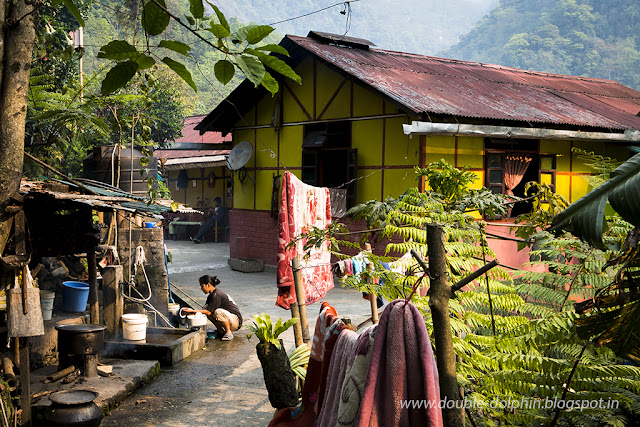 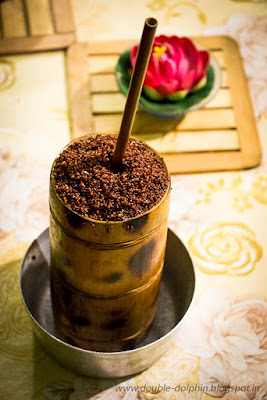 We were introduced to two more families who were staying at Mayal Lyang at the time, the Patils from Pune, and the Nagvekars from Mumbai as we sat down for a drink in the evening. The drink that was served was something I had read about, heard stories about, and was therefore especially looking forward to. This was Chhaang or Chi, a local brew that had been made at home. Chhaang is basically fermented millet served in a tall bamboo glass. Hot water is poured into the millet, and you then drink the alcohol which has dissolved in the water through a bamboo straw. Once you finish, you can just pour more hot water and continue drinking. When it begins tasting weak and watery, that’s when you need to change the millet. What does Chhaang taste like? I would describe it as port wine, but minus the sweetness. The alcohol content is on the low side, and instead of a buzz or high, what you get is this lovely mellow feeling which can be quite wonderful at the end of a long day of trekking and exploring. Lepchas believe in living in harmony with nature, and we got a small example of exactly what that entailed that evening. A gigantic grasshopper entered the room through an open window. In the city, there were only two responses one would have expected; swat it with something, or spray insecticide. Gyatso picked up the grasshopper gently, and let it out into the forest. There was no need for unnecessary killing. Indian food was served for dinner, which although delicious, was a tad disappointing. We were in the mountains after all; I had expected we would get to have Lepcha food. But then, there were guests with children there who may not be able to handle local food, and this wasn’t a hotel, hence separate cuisines for all the guests was out of the question. So we made our peace with it. 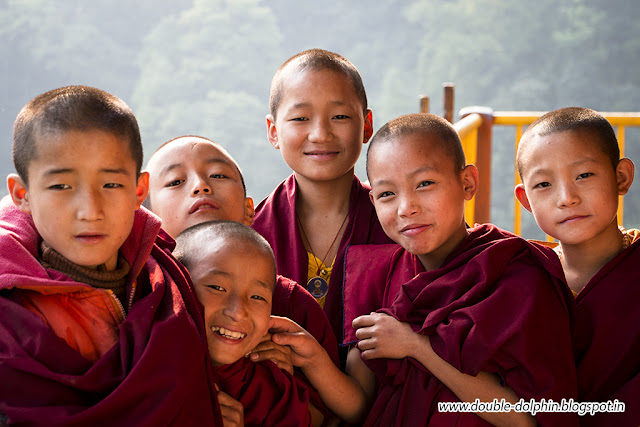 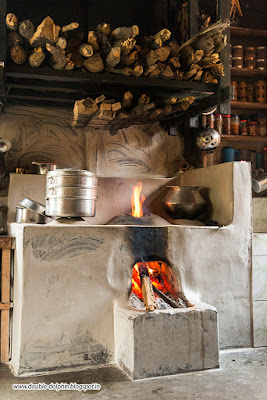 Next morning I was woken up by the actual crowing of a cock. This was the first time this had happened to me and it took me a while to realize it. It was really early in the morning, and after a cup of tea, Prasenjit and I decided to take a walk around the village. While Prasenjit climbed down to the river that flowed behind the house, I climbed up to the Thukcheng Laghang Passingdang monastery. I was greeted by a group of young children who were training to be Buddhist monks. I returned for a filling breakfast of “ghugni”, a dish of curried chick peas, and some very interesting steamed bread. We walked around the village some more. It was very quiet and peaceful. There was no traffic, and the only noise was of the birds and waterfalls. It was a pity that we were staying in Dzongu for only one night, because there really was a lot to do. From nature walks, to trekking, to bathing in the cool, fresh water of the rivers flowing through the region, Mayal Lyang really had everything you needed to get close to nature. We learned about Gyatso’s most famous guests, the Royal Family of Norway. The Crown Prince, with the Crown Princess and their children had spent some time here in the winter of 2010. The event put Mayal Lyang on the map, and we met a few tourists from Europe who arrived that noon. 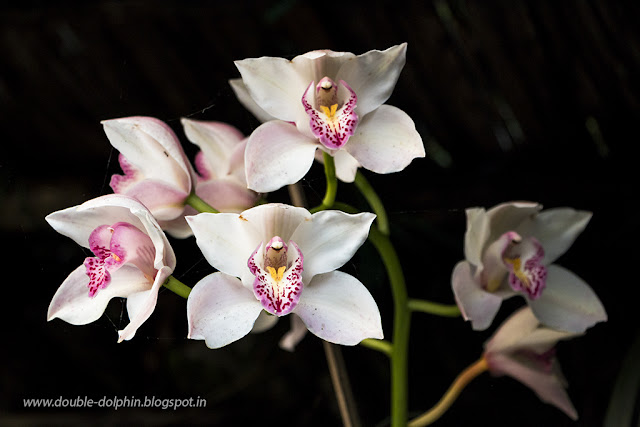 Food being a major priority in my life, I had mentioned to Gyatso in the morning that we wished to have local food for lunch that day. Would pork or beef be possible? Gyatso whispered something to Samsay, and for a fleeting moment I caught a look on her face that I was familiar with. It was the I-can’t-believe-there-are-Indians-who-eat-beef look. The vast majority of Indian Hindus do not eat beef, while Muslims do not eat pork. But there are some people like Prasenjit and me, who will eat pretty much anything as long as it tastes good. Samsay rose to the occasion in style, and for lunch that day we had rice, stinging nettle curry and pork. She had to go out for the meat, she told us, and apologized that there was no beef available. There was some pork at Gyatso’s brother’s place, and that’s what she cooked for us. The pork was just heavenly. Soft and succulent, with just the right amount of spice. The blander stinging nettle balanced it out. Our bellies full, we packed our bags, and prepared to move out. We would return to Gangtok that evening, and take a flight back to Calcutta (Kolkata) the next day. 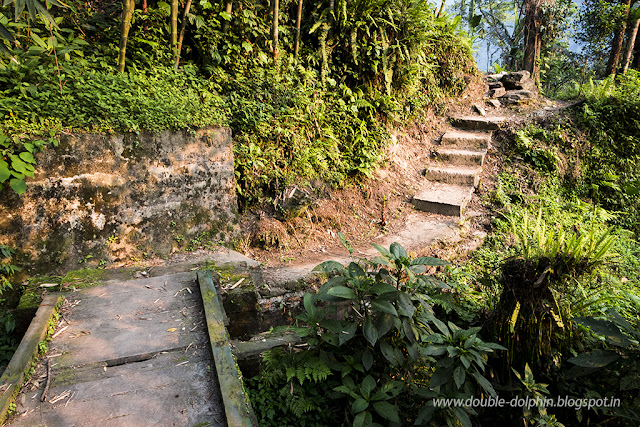 I highly recommend Mayal Lyang homestay to all nature lovers. If you can live without the comforts of a 5 star for a few days, it is an experience you are unlikely to forget. For the old or the infirm, Mayal Lyang may be something of a challenge, as staying here involves climbing up and down stairs quite a bit. It is a home in the mountains after all. Mayal Lyang is now threatened by the government’s plans to build dams in the area which will kill the Teesta River, and cause catastrophic damage to the ecology of Dzongu. I hope measures are taken so this treasure can be preserved for future generations. Winter is the ideal time visit Mayal Lyang. Since this is a forest, it is much warmer and more humid than other parts of the state, so summer can be quite trying. Just don’t make the mistake that we made. Stay for more than one night. 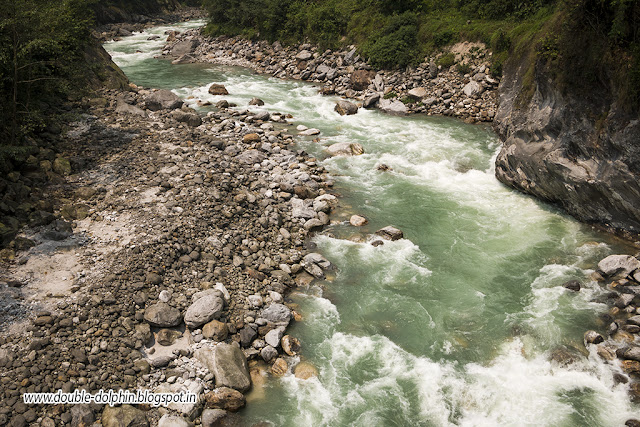 Posted by Deepanjan Ghosh at 14:10