The Niyamatullah Ghat Masjid stands on Calcutta’s (Kolkata) Nimtala Ghat Street. Notice something curious there? Nimtala and Niyamatullah sound rather similar don’t they? That is what originally sparked my interest in this mosque. So who was Niyamatullah and why is a mosque named after him? And how did the area come to be known as Nimtala? As it turns out, several stories intersect at this one location. 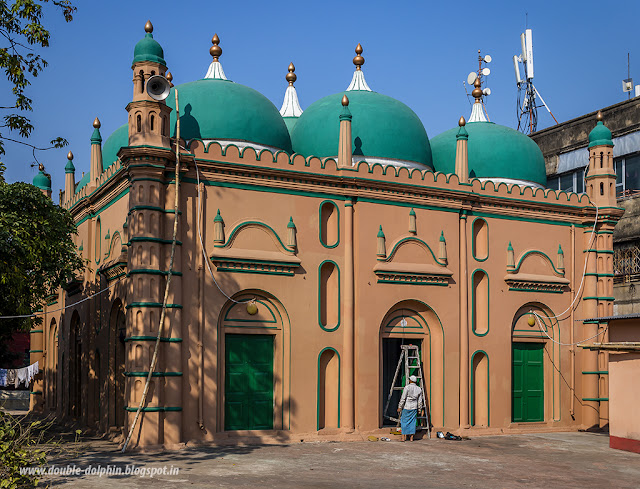 Located at 86/1, Nimtala Ghat Street, the Niyamatullah Ghat Masjid was built by a certain Mohammed Ramzan Ali, after whom a nearby lane is named Mohammed Ramzan Lane. Of Mohammed Ramzan, there are not many written records, but it is said that he was of a prominent Zamindar (landlord) family of the area and that Niyamatullah was one of his ancestors. No plaque or foundation stone can be seen now, but an old list from 1896 says that a foundation stone did indeed exist and it listed the date of construction as 1199 Hijra (the Muslim calendar), or 1784 as per the Gregorian calendar.

Although the Niyamatullah Ghat Masjid faces East, the entrance to the mosque is from the South, through a door on Nimtala Ghat Street. Beyond the door a narrow passage leads to a flight of stairs to the left. Seventeen steps, covered in terracotta tiles, lead to the open courtyard in front of the mosque. At the base of the staircase is the mosque’s small “Wazu Khana” where the faithful may perform their ritual ablutions before prayer. The entire structure is made of brick and mortar, and no iron beams or the like have been used. The Niyamatullah Ghat Masjid is a nine domed mosque, and on each of its four sides, are three doors. The stones used to make the thresholds of the doors probably came from the ruins of Gauda (also spelt Gour or Gaur), the ancient city in West Bengal’s Malda district, and have patterns of leaves and flowers carved in them. Marble from the ruins of Gauda have been used in many buildings in Calcutta (Kolkata) including the St. John’s Church in Dalhousie and on some of the tombs in the South Park Street Cemetery. 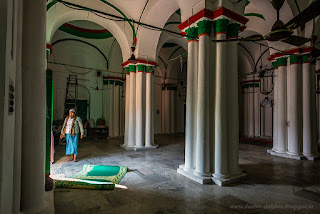 On the four corners of the mosque are four minarets, with two smaller minarets between each of them. Minarets are normally the place from where a “muezzin” calls the faithful for prayer with the “azaan”, but in the Niyamatullah Ghat Masjid, all minarets are purely ornamental in nature. Inside, the floor of the mosque is covered in marble and the insides of the mosque’s nine domes may be seen. Lines of geometric patterns are used inside the domes, which have been coloured red and green. On the Western wall of the mosque is the Mihrab. A Mihrab is a semi-circular niche found in the Western walls of mosques which serves three purposes; first, it indicates the Qibla, the direction of Mecca, which Muslims are supposed to face when praying, second, even if the mosque is filled to capacity, the Imam, seated inside the Mihrab would remain ahead of the Jamaat or congregation, and third, the architecture of the Mihrab creates acoustics which magnify the Imam’s voice, ensuring that he can be heard even without amplification. There are several smaller niches in the western wall, some of the niches are being used to store books and other small items.

Yet another architectural curiosity is the fact that this is one of only two mosques in Calcutta (Kolkata), built on a very high plinth. The only other mosque to follow this style is the Basri Shah Masjid, which is said to be the city’s oldest mosque. But the Basri Shah Masjid’s plinth is solid, there is no “taekhana” or underground chamber. The Niyamatullah Ghat Masjid’s plinth, which is about 9 feet in height, today accommodates several shops within it. Take a look inside and you will find that all the shops have arched ceilings. Locals even say that inside the plinth is an underground passage that once led to the river, that has been sealed shut. But are Nimtala and Niyamatullah variations of the same name?


Nimtala and Niyamatullah sound remarkably similar and many locals are under the impression that the ghat and street were originally called Niyamatullah and the Nimtala is a corruption of this. This is probably not true, and to understand the history of this, it is important to understand that 200 years ago, Calcutta’s Ganges, also called the Hooghly or Bhagirathi, was not following the same course as today. We know that the river has slowly shifted to the West, towards Howrah, leaving behind land that today forms Strand Road. What we now call the Nimtala Ghat Burning Ghat (or cremation ghat) is the third ghat to have that name. Across the road from the Niyamatullah Ghat Masjid stands the Anandamayee Kali Temple, built by a certain Nani Mohan Banerjee. This was where the old Nimtala Ghat once was. That is why the idol of the Anandamayee Kali Temple is in the avatar known as “shoshaan Kali”, or the Kali of the cremation ground. As the river shifted west, the cremation ground was forced to move, around 1827-28 to a spot south of the present Nimtala Ghat. The ghat finally moved to its present location in 1875, because the Port Commissioners wanted a railway line to go through the place. The street that leads to the ghat was originally called Jorabagan Street and was renamed Nimtala Ghat Street much later.

All these places get their name from a neem or Margossa tree that stood near the present Anandamayee Kali Temple. Nimtala literally means “under the neem tree”. This tree predates the mosque and even the first Nimtala Burning Ghat. Reference to it is found in records of Charnock’s landing. It was under this tree that Charnock had sought shelter on the 24th of August, 1690, when his party landed in Sutanuti. The giant tree had shrivelled over time to a trunk and one solitary branch that hung over the Anandamayee Kali Temple for a long time until it was destroyed in a fire in 1882. Therefore, although the names are remarkably similar, this similarity is purely coincidental. But now arises the other question; where is the Niyamatullah Ghat?

The Niyamatullah Ghat was built by Mohammed Ramzan Ali’s ancestor Niyamatullah. It was close to the mosque, to the west, since the river was where the Strand Road is today, and was behind the spot presently occupied by the Anandamayee Kali Temple. Locals say that under the mosque’s 9 foot high plinth, there was once a passage that provided access to the ghat, which has since been sealed. In fact the mosque was probably built on a plinth to prevent it from getting flooded at high tide. The ghat at which Charnock’s party landed is described by Calcutta’s chronicler Pran Krishna Dutta as having a series of low arches, a roof and a large neem tree to its North. Pijush Kanti Roy, in his book Mosques in Calcutta, says that this description refers to none other than the Niyamatullah Ghat, and that that is where Charnock actually landed. While this particular claim would need to be backed by the mother of all verifications, my own aim is much more humble. I simply want to know where the Niyamatullah Ghat stood.

Since the river has retreated, Strand Road has been built, and buildings have come up on every inch of free space, it is extremely unlikely that any trace of that ghat would remain. So I called up my good friend and frequent collaborator, Brian Paul Bach and asked him to send me some old maps. I looked at 4 maps, from 1785, 1793, 1840 and 1852, but found no trace of the ghat. There are several explanations that come to my mind. First, that perhaps it was a small bathing ghat, not an important and large landing ghat, and therefore was not given any importance by cartographers like Wood and Upjohn. Second, maps show the Sutanuti and Rathtala ghats fairly close to one another, so maybe there was a cluster of ghats, one of which was the Niyamatullah Ghat. Or perhaps the Niyamatullah Ghat was built over the spot where the Sutanuti Ghat once stood. The Anandamayee Kali Temple is the only surviving marker and although “somewhere near the temple” is neither very satisfactory nor very precise, we will have to make do with it.

THE NIYAMATULLAH GHAT MASJID – A SYMBOL OF COMMUNAL HARMONY

The legend about the Niyamatullah Ghat is that it was used by both Hindus and Muslims and one fine day, when a group of priests were offering puja at the ghat, some local muslim boys, who were bathing there were careless, and splashed some water on them. According to existing superstitions of the time, this meant the Brahmins had been “polluted”, all their puja efforts had come to nought, and they would need another dip in the holy water to purify themselves. The Brahmins went away, muttering that they would never use this ghat again. When Mohammed Ramzan Ali heard of this, he immediately had sentries posted at the ghat and announced the Niyamatullah Ghat would be open exclusively to Hindus henceforth. Pran Krishna Dutta points to this as a great example of a man trying to maintain communal harmony, at this risk of enraging members of his own community. 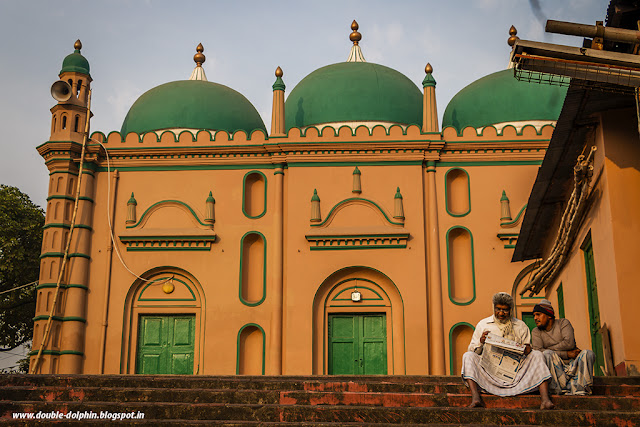 The Niayamatullah Ghat Masjid today has two temples on both sides. To the West, the Anandamayee Kali Temple and to the East, the Durgeshwar Shiva Temple. Two temples and a mosque, existing peacefully, side by side. Within the mosque complex are several small dwellings and several of the families living there are Hindu. I was chatting with one of the Hindu residents and he said to me, “we are very happy that our mosque has been renovated. Now people like you are coming to see it”. That line stayed stuck in my head – “our mosque”, not “their mosque”. “To you be your way, and to me mine”, the Prophet (PBUH) says in the Qur’an (109:1-6); religion is a personal matter. But our history, our heritage, irrespective of religion, is something we share, and it belongs to all of us.