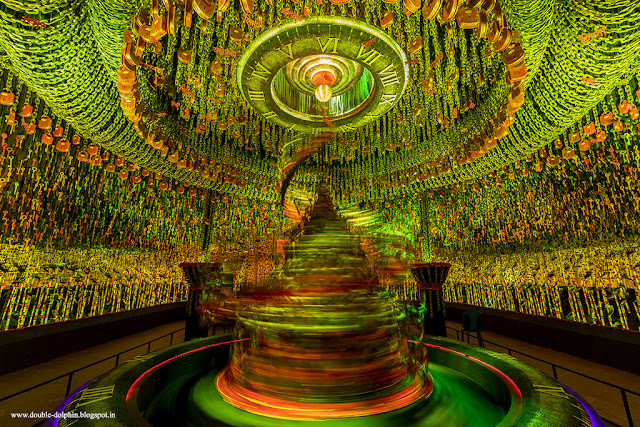 This year I set out to cover 100 Durga Pujas in Kolkata. It was more an endurance test than anything else as the heat and the humidity were quite unrelenting. But, I did manage to photograph 100 pujas by Navami morning, the penultimate day of the festival, and now, as Bengalis prepare to tearfully bid adieu to their beloved Goddess, here are my top 10 favourite Durga Pujas of 2017, in no particular order. 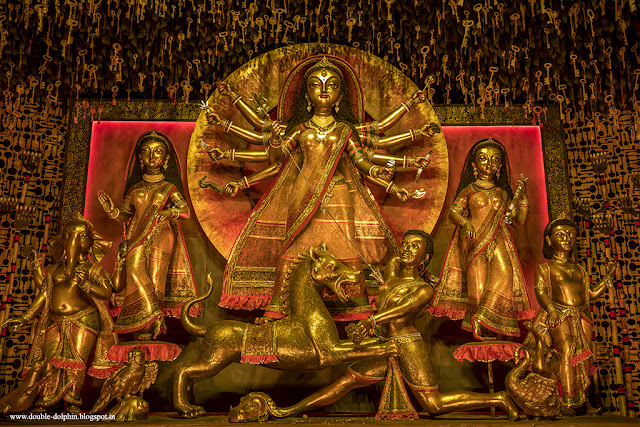 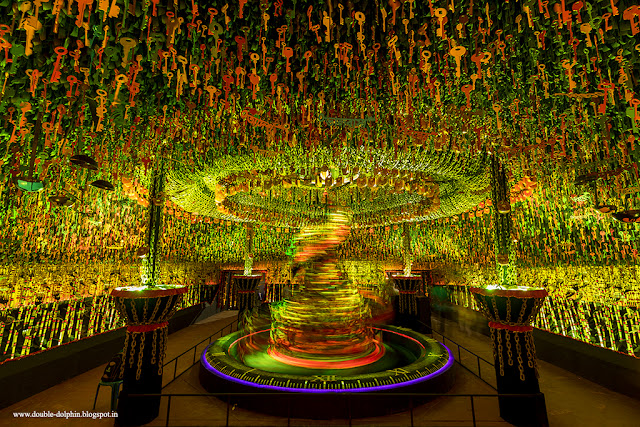 Behala’s pujas are extremely creative in general, and Barisha Club is one of the best-known from this southwestern part of the city. This year’s pandal was artist Gauranga Kuila’s work. I think the theme was something about scrambling to get to the top or something like that. Don’t ask me why there were millions of keys hanging from the ceiling. But the central installation piece, in front of the idol, was quite something. A spiral of people, reaching higher and higher, rising from one giant clock dial and going towards another. The whole thing was spinning, creating an illusion that the spiral was actually rising higher. Very smart use of lights and colours made this a complete stunner. 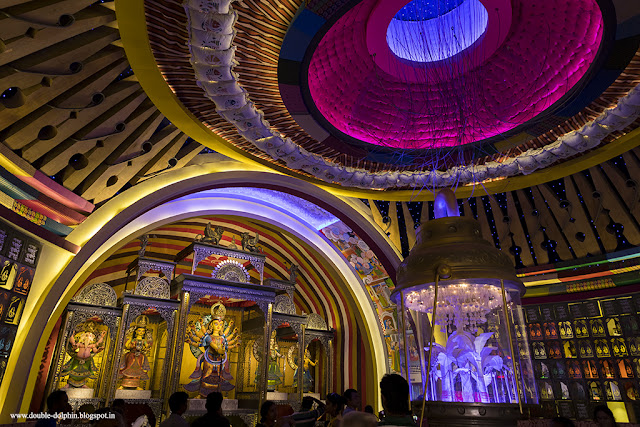 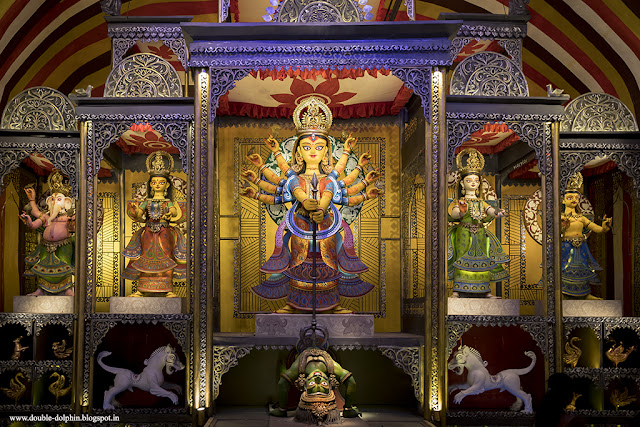 A pujo that has always been very high on concept. Natun Dol, meaning new group, lead their visitors into the space that they use for worship, through a long and winding passage, which gives them enough time to set up a story. This year, the pandal featured giant sized items of everyday use, such as clothespins and emergency lamps. The idols were housed inside what looked like large and ornate metal boxes, and there was a very large scrunchy (?), hanging from the ceiling! Again, terrific use of light and colour. 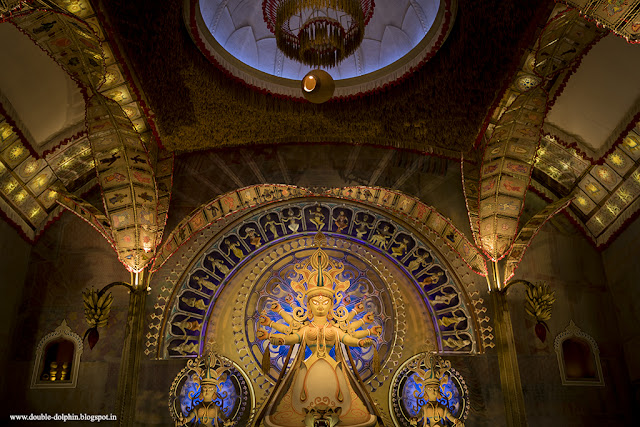 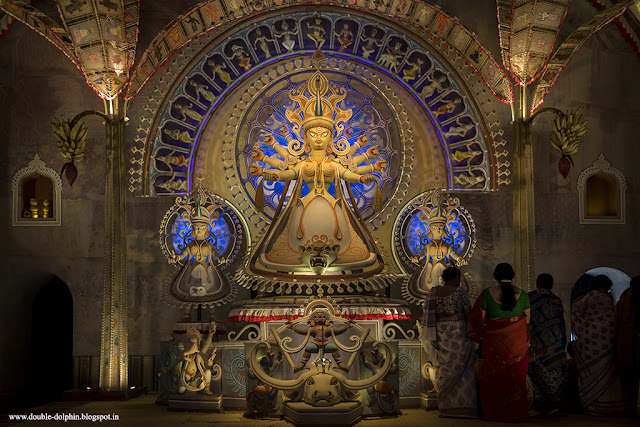 The work of noted artist Bhabatosh Sutar, who has worked on Chetla Agrani Club as well this year. Once again, what precisely the message of the whole thing is supposed to be is not quite clear, but the overall effect is quite grand. On the outside, chairs and crows seem to be the primary motif. On the inside, what appears to be a very interesting take on a Bengal village hut, complete with banana trees. The blues and purples contrast well with the ochre colour walls and idol. The tremendous size inspires awe. 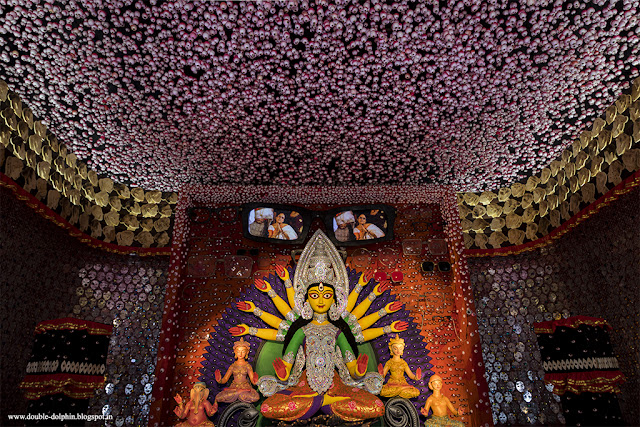 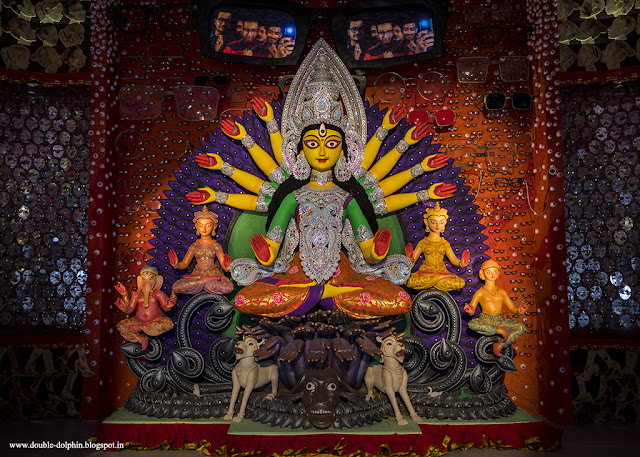 A typical case of too many things at the same time. Why was there a seated Buddha outside? What was there a Durga-being-unloaded-from-a-truck scene inside? And how were these two things connected to the main pandal, which seemed to have picked eyeglasses or spectacles as its motif or theme? But leaving these questions aside, the main pandal is extremely eye-catching. Above the idol, a giant pair of screens, made to look like eyeglasses, was showing people praying to the Goddess, asking for their wishes to be fulfilled. I can’t say I’ve ever seen this before. 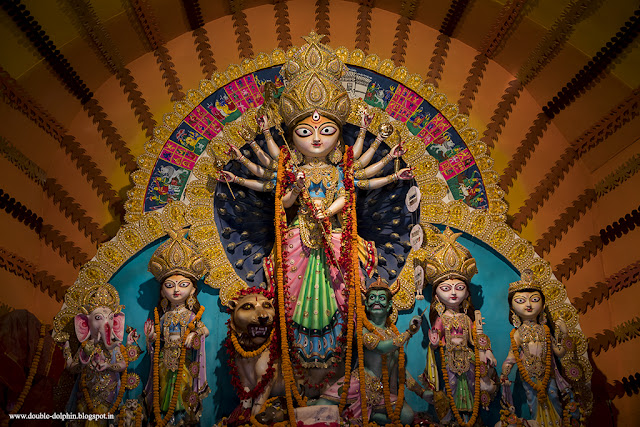 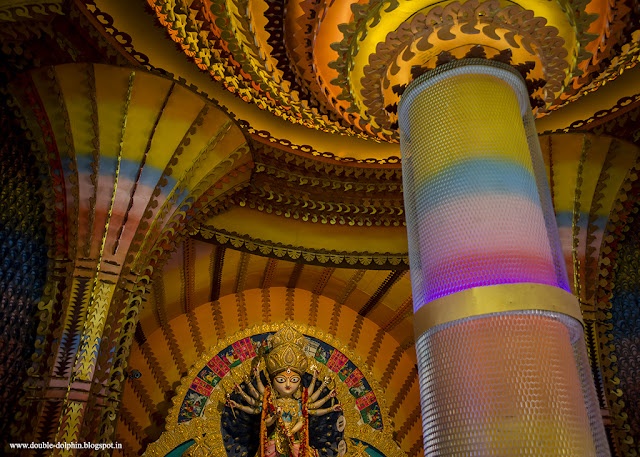 If Ahiritola had a theme at all this year, I certainly couldn’t tell what it was. But I will remember them for having the cutest, almost cartoon character-like Durga idol. An extremely, and I do mean extremely, colourful pandal as well. 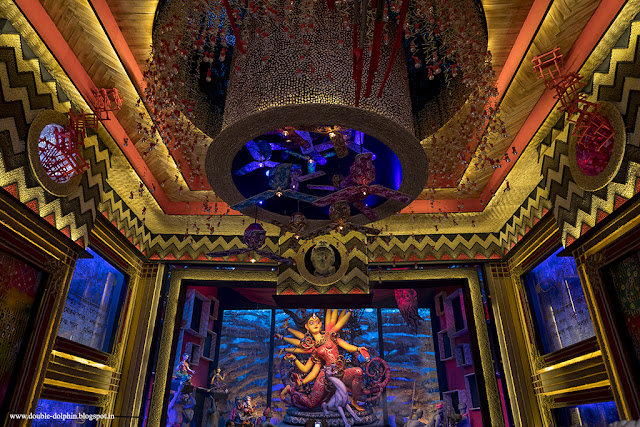 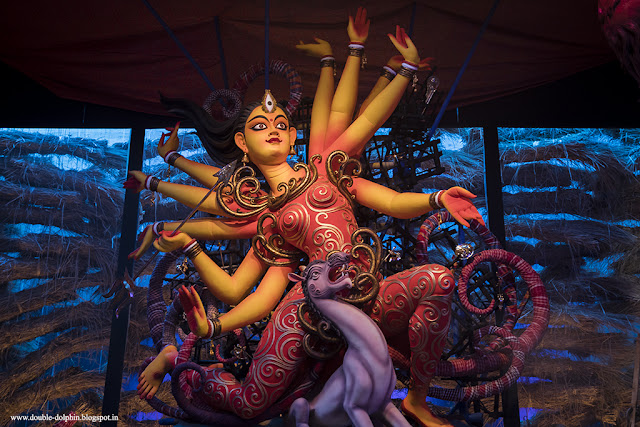 Kumortuli, this year, has picked the idol-makers of their neighbourhood as their theme. The pandal offers multiple scenes from the life of the idol makers and veteran actor Soumitra Chatterjee’s voice may be heard reciting poems. But, I couldn’t figure out why the idol looked the way it did. It was very different from the traditional idols, and perhaps a bit too wild even for the modern theme puja. 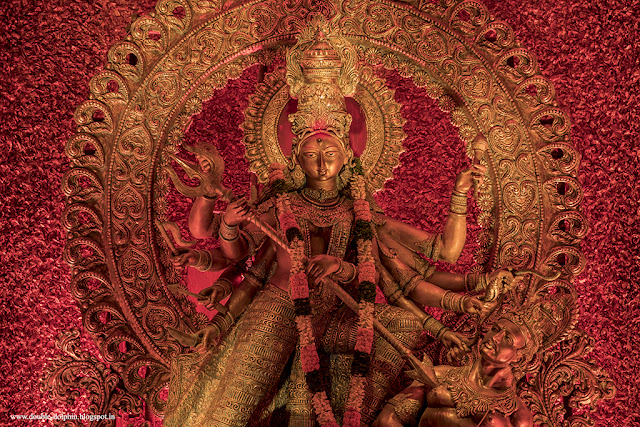 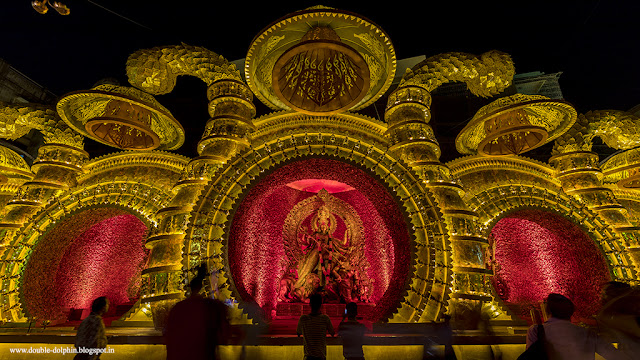 Ballygunge Cultural Association chose to pun on the Bengali adage, “jaatey matal, taley theek”, replacing matal or drunk, with metal, which is the construction material they have favoured this year. The result is a pandal that absolutely must be seen at night for the intended effect. I would have liked it if the idol had been a different colour, but the shiny yellow metal pandal draws all your attention at night. 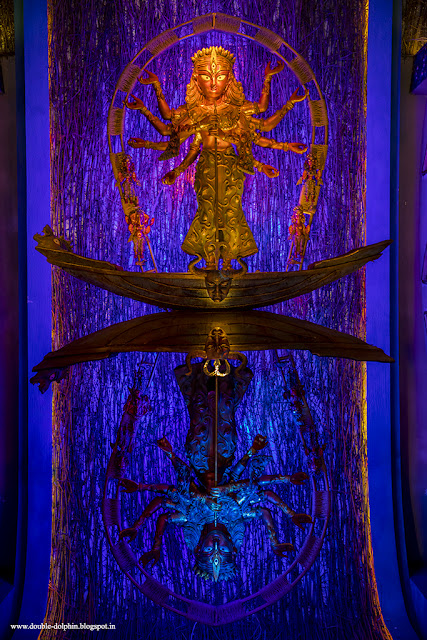 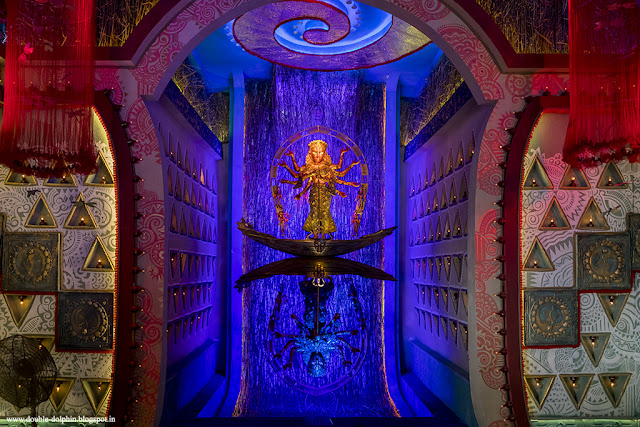 A stone’s throw from the equally famous Mudiali Club, Shibmandir seems to have a particular affinity for blue backdrops. It has featured in their last two pujas, if not more. This year they chose as their theme the fact that the goddess was supposed to arrive by boat. There was a boat with oars outside the pandal, but the stunner was the idol inside. It appeared to be the Goddess on a boat, and a reflection of it on the water below, when in reality, it was another idol, inverted, painted blue and with water ripples projected on it. The illusion was perfect and mesmerizing. 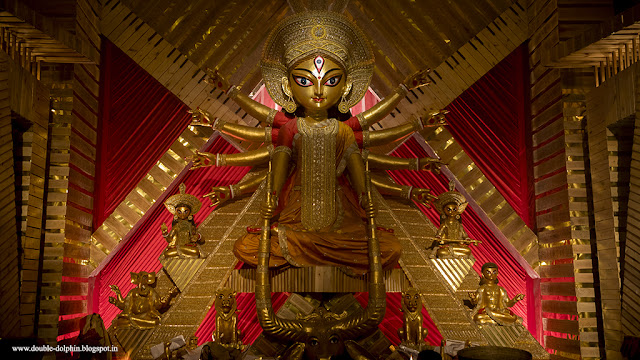 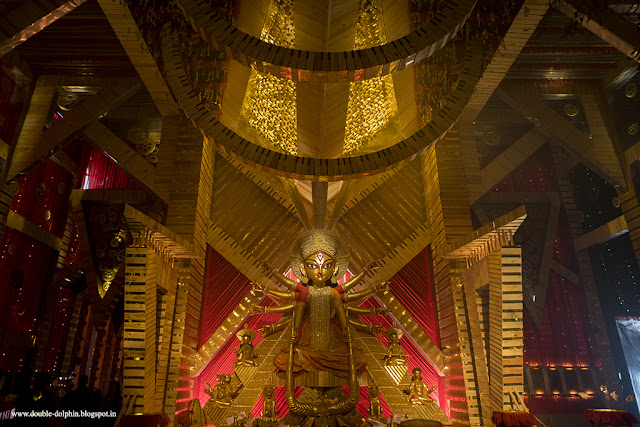 Don’t ask me what Selimpur Pally’s theme was, I didn’t get it. But whatever they did, looked incredibly grand, although the idol looked suspiciously familiar. This style, a seated Goddess with a disproportionately large head that is shaped like a betel leaf, has shown up earlier in Behala State Bank Park (2015) and Behala Friends Club (2016). Perhaps it is the same artist at work? But the overall colour scheme of red and gold, the use of wood, the use of bounced and softened light, created an amazing atmosphere. Quite a stunner! 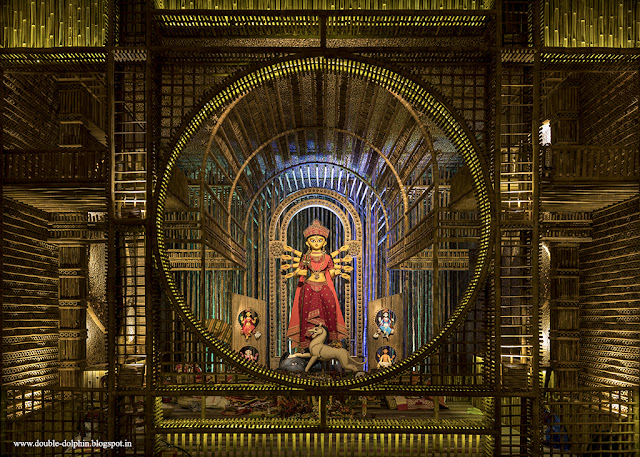 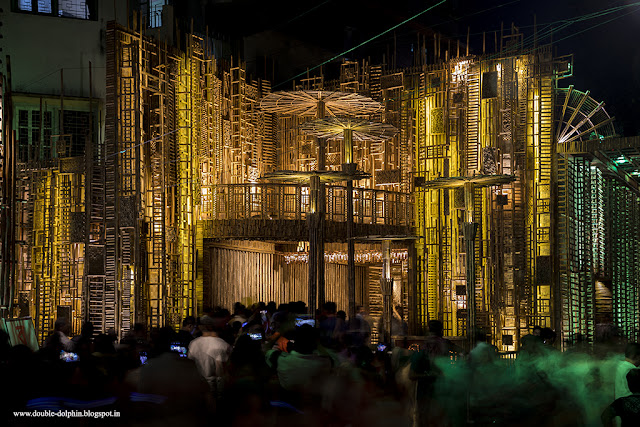 The first thing that came to mind when I saw Bakul Bagan’s pandal this year was Titu Mir, the Bengali, Islamic preacher, who led a revolt against the British. Titu Mir was famous for his bamboo fort and Bakul Bagan’s pandal this year is made completely of bamboo. Not only the pandal but bamboo has been used even in the idol’s ornaments. The bamboo has been sourced from Tripura and is of a special kind - very thin, but very hard. The pandal interiors make for some terrific photographs thanks to the great attention to symmetry and terrific lights.