In Achipur, near Budge Budge, approximately 33 km to the southwest of Calcutta (Kolkata), stands an abandoned gunpowder magazine with an interesting story behind it. On google maps, the area is currently marked as “Birlapur Riverside Picnic Spot” and locals call it the Achipur “barood-ghar” (barood – gunpowder, ghar – house). Veteran blogger Rangan Datta was the first to bring these abandoned structures to my notice. Trying to find details about them led to the uncovering of a wealth of information, but as is the norm with Bengal, there more questions than there are answers. 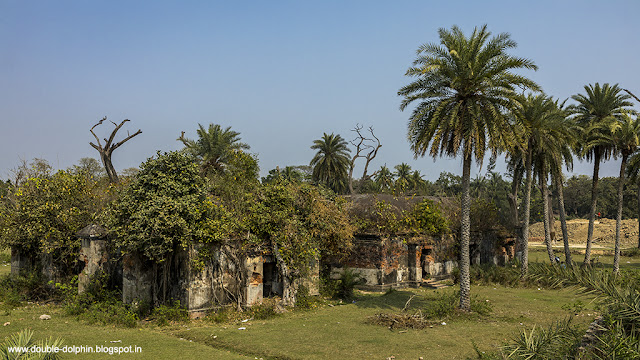 THE GUNPOWDER MAGAZINE OF ACHIPUR

The buildings themselves stand in a large, open field in 3 clusters. Closest to the river, is the first cluster of 4, single storey masonry buildings. The buildings are completely windowless and have a strange, almost Islamic-looking sloping masonry roof. Each building has a projecting gateway, capped by a pedestal with steps leading in. 3 buildings appear to be joined together, while one stands a few feet apart. The cluster appears to have been surrounded, at one point, by a boundary wall, with a guard-house or pill box at the 4 corners of the wall. 3 of the pillboxes are still standing while the wall has almost completely disappeared. Inside, the floor appears to have been dug up or damaged and is uneven, but appears to have been made of masonry as well. All the 4 buildings however, seem to have a single raised rib-like structure, which runs the length of the floor. The interior walls, however, seem to be in remarkably good shape.

About 80 metres to the north of the first cluster, is the 2nd cluster of 2 buildings, similar is shape and structure. There appears to have been no boundary wall around these two buildings, although one of them does contain two windows. The floor here appears to be more intact, although some damage has occurred. Locals use the walls to dry cow dung cakes, which are used as fuel. Cowherds use the rooms as shelter from the sun.

Approximately 50 metres to the West of the second cluster lie the ruins of what was once a large, 2 storeyed house. Rangan Datta speculates that this building may have served as the offices of the gunpowder magazine, along with the residence of the officer in charge. O’Malley wrote that in 1914, the village contained a “ruinous bungalow” that was once occupied by the district collector. The bungalow had floors tiled with Chinese marble, which leads me to believe that it may have been the ruins of Tong Achew’s bungalow, the first official Chinese settler in Bengal, after whom Achipur is named. Is this two stories structure that house? There is no way to say for sure. There is certainly no flooring material left for examination. 20 metres to the northwest of this, is a small, single storeyed building. This, Datta says, may have been a sort of servant’s quarters, although, in my opinion, it may, just as well have been an outhouse. The building is inhabited at present. The larger building is much more heavily damaged, with roofs and floors almost completely gone and only small amounts of plaster left on the walls. The entire area contains several very large, dead trees, which gives a surreal aura to the whole scene. Adding to the surreal nature of the whole scene is the loud music played by people who gather in the field for picnics, especially in winter.

BUT WHAT IS A GUNPOWDER MAGAZINE?

A gunpowder magazine is a building where gunpowder is stored in barrels, for safety. But what was one doing so far out in the middle of nowhere? The answer can be found in the Bengal District Gazetteers book on the 24 Parganas, by L.S.S. O’Malley. In 1914, O’Malley writes, “Achipur at this time, contained a powder magazine, at which vessels proceeding to Calcutta were required to deposit all gunpowder on board, except 100 pounds, which they were allowed to keep in order to fire salutes or signals of distress”. The Lieutenant Governor of Bengal reduced the permissible limit to 50 pounds in 1863. The origins of this custom may be found in an order passed by the British Governor General of Calcutta on 16th July, 1801. The concern was that “the explosion of a large quantity of gunpowder on board of a ship, lying off the town, might be attended with the most destructive consequences to the town, to the inhabitants thereof, and to the shipping in the port”. The order speaks also of accidents which had occurred where shots had been fired into Calcutta or the surrounding countryside “by ships saluting Fort William”. The order, therefore, required all ships proceeding further from “Moyapore” to deposit their gunpowder at the magazine erected at that place. Moyapore seems to have been the anglicized version of Mayapur, and refers to a place very close to Achipur. But what are these ruins? The Achipur Magazine? Or the Moyapore Magazine?

I spent several hours poring over books to try to find the answer to this question, and as far as I can tell, it isn’t. In his “The Good Old Days of John Company” Carey writes, “A magazine for the reception of gunpowder from vessels proceeding up the river, having been erected at Moyapore, it was ordered that all powder should, from the 1st June, 1803, be landed at Moyapore, instead of Acheepore”. S.R. Elson’s “The River Hooghly: From Calcutta To Saugor Island”, contains a description of the Moyapore magazine – “a low building protected by lightning conductors, and standing on a little point just above a small creek”. This description would seem to indicate that the Moyapore Magazine was indeed a separate structure, since there is no mention of clusters of buildings or boundary walls and there is no creek anywhere near the Baroodghar. The Moyapore Magazine continued to be used well into the 20th century. A 1921 Bengal Chamber of Commerce report says that Class 2 and 3 type explosives cannot be stored at Moyapore Magazine.

It then appears that the clusters of buildings were indeed the original Achipur Magazine and have probably remained abandoned since 1803. But what happened to the Moyapore Magazine? Around 2017, Professor Keith Lilley, a historical geographer at QUB led a team of academics to document the surviving towers of the Great Trigonometrical Survey of India, commonly known as GTS Towers. The original GTS survey had erected a number of towers all around Bengal, but they had also used pre-existing towers, some of which had been semaphore towers, used for a short lived system of pre-telegraph communications. The records they had with them, gave them the exact latitude and longitude of the tidal semaphore tower, but those co-ordinates point to a position in the middle of the Hooghly river! Their website says “Appears from map evidence to have stood on an embankment on the east side of the Hooghly River. Despite an intensive search locally, and local enquiry, no remains of the station were located. Presumed destroyed, perhaps through erosion of banks of Hooghly River”. The same fate may have befallen the Moyapore, or Mayapur Magazine.

I am grateful, I suppose, that the Achipur Magazine still exists. One reason for this is that the land is owned by the Kolkata Port Trust. However, the Port Trust seems to have no interest in preserving this piece of history and from what I can tell, the top brass is probably not even aware that they own a piece of history.