Weekend at the Himalayan Hotel

“How would you like to stay in a 100 year old hotel”? The question from fellow blogger Poorna Banerjee was a purely rhetorical one, of course. She knew that I would jump at the chance. And so it was that in the last weekend of the month of May, I found myself escaping the heat and dust of Kolkata for the chilly comfort of the historic Himalayan Hotel, now the Mayfair Himalayan Resort and Spa. 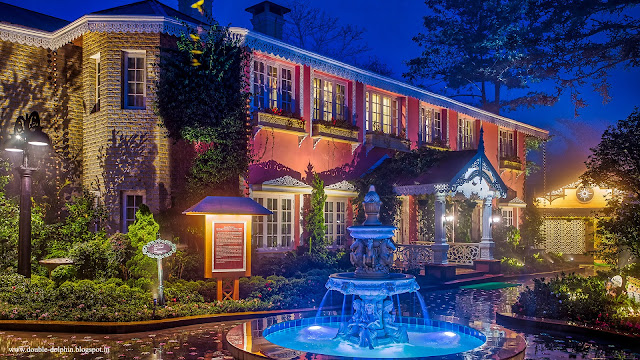 THE MACDONALDS OF KALIMPONG

While racism was an undeniable part of the colonial experience, there were many instances of British men and women who did not see Indians as being beneath them, who married Indians and started families here, and indeed some who stayed on even after independence. Apart from colonial officials and boxwallahs seeking to make their fortune, large numbers of missionaries came to India, to start churches and schools which exist and excel even today. Among them was the Reverend John Macdonald, who settled in Kalimpong and married a Sikkimese woman. His son David, settled in Kalimpong on a small plot of land, where the family home was built in 1900.

Britain had been trying to find inroads into China since the time of Warren Hastings. One of the earliest missions was led by George Bogle. One outcome of that mission had been the Bhot Bagan Buddhist Monastery, which may still be seen in Ghusuri, in Howrah. In the 19th Century, the British had conquered Burma and Sikkim, but Tibet remained semi-independent. However, in Calcutta, Viceroy Lord Curzon was concerned that Russian influence in Tibet was growing and that this would eventually lead to a Russian invasion of British India. To counter this threat, the Younghusband Mission was proposed in 1903. On the surface, it was a diplomatic mission to Tibet, led by Colonel Francis Younghusband, but in actuality, it was an invasion of Tibet by British Indian forces. The Tibetan army with its antiquated muzzle loaders stood no chance against the Maxim Machine Guns of the invading forces, and were compelled to sign the Treaty of Lhasa in 1904. Along with granting the British trade rights, Tibet was to pay a crippling indemnity of 7,500,000 rupees and was not to have diplomatic relations with any other foreign power, making it a British protectorate for all intents and purposes.

The Younghusband mission had taken an interpreter along, but he fell severely ill and David Macdonald was selected to take his place. He was familiar with Himalayan culture and was fluent in the local dialects, making him ideally suited for the task. David served first as interpreter and then as a trade agent in Yatung and Gyantse. During this time, he came into contact with Tsarong Dazang Dramdul. General Tsarong was the head of the Tibetan army, a diplomat and the man who started Tibet on the path of modernisation. He was a close aide of the 13th Dalai Lama and through him, David came to know the 13th Dalai Lama, Thubten Gyatso. His Holiness took an instant liking to David and made him part of his inner circle. Tibet was then administered by the Qing Dynasty of China, but the Dalai Lama had long nurtured a dream of complete independence and this led to a conflict and an invasion of Tibet by Qing forces in 1910. The Dalai Lama had to do something which his successor would have to do almost 50 years later – escape to India.

His Holiness was dressed in tattered clothes and disguised as a shepherd and with the help of his friend David, he travelled undetected in a caravan, through Gyangtse, Pharidzong and finally to Kalimpong. When he arrived in Kalimpong, Thubten Gyatso was so scruffy and dirty that David’s wife insisted on immediately preparing a hot tub for his bath. The tub drained into the open, and the water from the tub was immediately collected and distributed by the thousands of his followers who had gathered outside. Meanwhile, the British government, impressed with David’s dedicated service, had offered him the choice of a European land parcel in 1905. He asked instead for a plot of land adjacent to his home. Here, from the rocks that are found everywhere in the Himalayas and from the wood and bamboo in the surrounding hills and valleys, he built the Himalayan Hotel.

After David, it was managed by his 3 daughters. Annie Perry handled public relations, Vera handled the food and kitchen, while Vicky Williams looked after accounts. Together, the 3 of them came to known as the “the three fat ladies of Kalimpong”. Right from its inception, the Himalayan Hotel became the centre of social life in Kalimpong. It was the natural choice for mountaineering parties looking to climb Everest and it played host to the doomed expedition George Mallory and Andrew Irvine of 1924. David’s son John Macdonald was supposed to climb with them, but had to be left behind at base camp because he had had far too much to drink the previous night. Ultimately, the Himalayan also hosted the successful mission of Edmund Hillary and Tenzing Norgay. Austrian mountaineer Heinrich Harrer, author of “7 Years in Tibet” has lived here as well.

Apart from being the centre of social life in Kalimpong, the Himalayan Hotel was the centre of intrigue as well. Positioned as it was at a crossroads between China, Tibet, Sikkim and Bhutan, the hotel had hosted the legendary spy Frederick Marshman Bailey during the heady days of “the great game”. After Indian independence, as Tibet rebelled against communist China and India annexed Sikkim, Kalimpong continued to serve as a “nest of spies” in the words of Prime Minister Nehru. Kalimpong also played host to Prince Peter of Greece and Denmark, who conducted anthropological studies among the thousands of Tibetan refugees then living in Kalimpong. The Himalayan also hosted famous actors and actresses over the years. From Hollywood, Angie Dickinson, Shirley MacLaine and Richard Gere, from Bollywood Sunil, Nargis and a 6-year-old Sanjay Dutt, Zeenat Aman and Dev Anand. Being a quiet retreat from the hustle and bustle of the big city, the Himalayan Hotel has also served as a place where writers stayed, working on their books. Among the more famous ones are Dominique Lappiere, who compiled his book City of Joy here and Anne Thurston, who worked with Gyalo Thondup, second-eldest brother of the 14th Dalai Lama, on their book “The Noodle Maker of Kalimpong”.

The end of the Macdonald ownership of the hotel happened for reasons all too familiar in India. Tim and Nilam Macdonald’s children had settled abroad and did not intend to come back to run the hotel. With hope for the future gone, the family lost interest. “The place started falling to pieces”, Bjorn De Niese (VP Sales & Marketing) of Mayfair Hotels told us, while giving us a tour of the property. “That is when we came in, and offered to buy them out”. Bjorn is keen to stress that there were many who were prepared to offer substantially more than what Mayfair offered, “but we were the only ones who wanted to run it as a hotel. Anyone else would have torn it down and erected apartments”. After their takeover, however, the Mayfair Group has chosen to perpetuate the memory of the Macdonalds, by naming wings and parts of the hotel after them. The heritage block has been named after Annie Perry. David has had the library named after him, while John, who cheated death because he drank too much, rather appropriately, has the bar named after him. Various other family members have gardens and blocks named after them as well. Photographs of the family and old Kalimpong are everywhere. Mayfair has also restored the property and substantially upgraded it, turning it into a modern luxury resort.

WEEKEND AT THE MAYFAIR HIMALAYAN RESORT AND SPA

As we checked in after a long drive from Bagdogra Airport, I asked Poorna if I would be staying in the heritage block. “Where else will someone like you stay”, she replied with a wink. Once I entered my suite, my jaw hit the floor. The little wooden cottage had been refurbished in style and the effects were spectacular. Polished wood and brass everywhere, including period-style sound electric switches, a king size four poster bed and a bathroom with a bathtub that looked terribly inviting, especially after that drive. Glittering chandeliers hung from sloping ceilings while on the walls were black and white photos of Kalimpong from the pre-independence era, taken by the local Kodak Studio. But before we could jump into the tub, we were treated to a sumptuous lunch at Tiffany’s, one of the two restaurants that the property has. The Chinese food was familiar and comforting, the chicken momos were top notch.

Day 2 was the day we were supposed to be out and about exploring town. The massive breakfast buffet with Indian and continental options, was ready for us at 7am. The puri and sabzi was delicious, the eggs to order were perfect. Unfortunately, the tourist spot Deolo Hill, which offers panoramic views of the town, proved to be a flop, thanks to a thick fog. The Chief Minister was in town, which meant security also put an end to our hopes of seeing Dr. Graham’s Home, another major tourist attraction. But a drive in the mountains is always pleasant, and we drowned our sorrows in some delicious thukpa and thenthuk at Mamma Mia, the café and bakery in the hotel. Internet and wifi connections in the room were intermittent, to put it mildly, however, the hotel did have an excellent library with many popular Hollywood and Hindi movie DVDs. We watched Padosan and Argo over dinner.

The weather the following day looked much better, but there were problems of a different kind. What I wanted to see was Gouripur House, the now derelict house where Tagore had once stayed, but due to some miscommunication, we ended up crossing the border into Sikkim, to see another house where Tagore had also stayed, in a place called Mongpu. Our driver, however, was cooperative and once he realized what it was we wanted to see, he promptly drove us back. But from day one, I had been disappointed that we weren’t getting to see that legendary view that the Himalayan had, of the Kanchenjunga, thanks to cloudy, foggy weather. My prayers were answered on our last evening there. Two nights of heavy rain caused the fog to clear and the clouds parted, revealing a most spectacular Himayalan sunset!

Luxury resorts in the hills are something of a rarity. The Mayfair Himalayan Resort and Spa, in my opinion, is one of the finest. The tasteful restoration adds to the heritage experience. While they have some minor issues with the speed of room service to work out, my experience overall, was a good one. The two restaurants on the property serve great food, and if you want to experiment, you can always venture into town. I recommend the roast pork at Gompu’s restaurant, washed down with a chilled beer. There are also several restaurants near the back gate of the property. Poorna reports that the spa is excellent. If you’re preparing for an Olympics meet, the hotel even has a gym and a swimming pool. But for someone like me, the fact that my mobile network was almost non-existent, was a huge blessing. I could simply sit back on the deck without a care in the world, and stare out at the mountains.

DISCLAIMER – I stayed at the Mayfair Himalayan Resort & Spa at the invitation of the management.

For more on our stay, check out Poorna’s blog post, here.
For reservations, check out Mayfair's website, here.