Let me start off by clarifying that I do not mean to suggest that the Kali Temple established by Rani Rashmoni in the Dakshineswar village (Barrackpore Subdivision, North 24 Parganas District, West Bengal), is false or fake. The temple is, in fact, one of the most popular Kali Temples of West Bengal and is visited by lakhs of devotees every month. But the temple is commonly referred to as the “Dakshineswar Temple”, which is incorrect. While it is a temple, and it is in Dakshineswar, the name of a temple of Goddess Kali cannot be “Dakshineswar”, because Dakshineswar is a male name. Many people believe that it is called Dakshineswar, because the idol inside is of Dakshina Kali. This too is incorrect, because the idol housed in Rani Rashmoni’s temple is of Bhavatarini, one of the many aspects of Kali. Even if the idol was of Dakshina Kali, then the temple’s name couldn’t have been Dakshineswar, but Dakshineswari – that crucial “i” in the end makes it a female name. The temple is erroneously called Dakshineswar because that is the name of the village it is located in. But the name Dakshineswar definitely refers to a Hindu deity of some kind. So who is this Dakshineswar and where is his temple? That is the point from which my search began. 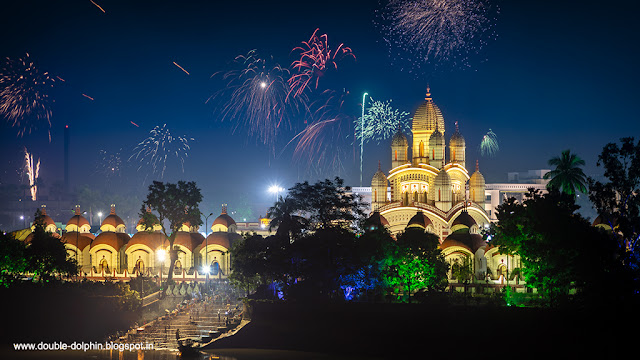 THE HUNT FOR DAKSHINESWAR

My first point of contact when it comes to Hinduism is my parents. Both my mother and my father are devout Hindus, well-versed in the intricacies of the faith and with close ties to the Ramakrishna Mission. From my brief time studying the Hoysala temples of Karnataka, I knew that the suffix “ishwara” or “eswar” is only used for a Shiva temple. My parents confirmed that there was indeed a Shiva temple called Dakshineswar, and the great Bengali mystic Ramakrishna Paramhansa himself is supposed to have worshipped there. But Ramakrishna had died in 1886. Would an obscure temple he had worshipped in, still remain standing? I turned to the greatest tool my generation has, for all queries related to life, love, religion, and everything else – Facebook.

A post enquiring about the existence of any ancient Shiva temples in the vicinity of the Kali Temple of Rani Rashmoni, especially one referred to as Dakshineswar, got several enthusiastic responses. My colleague Chandrima Roy, who lives in Dakshineswar was able to confirm that such a temple did indeed exist. But Santanu Palit, also from Dakshineswar, went one step further. He lived within walking distance of the temple, and after a visit, confirmed to me that the old “Buro Shib” temple near his house was indeed the temple that I was looking for. And so I set off, camera in hand, to the temple, which was right on the border between Dakshineswar and Ariadaha, a stone’s throw from the Ariadaha Hindu cremation ghat.

DAKSHINESWAR: THE LORD OF THE SOUTH

The origins of the Dakshineswar Shiva temple are shrouded in mystery and legend obscures facts. Above the entrance, the modern signage proclaims that veneration of the linga or phallus now housed within, began during the reign of a certain “Baan Raja” (বাণ রাজা). The Baan Raja legend is one that is found all over West Bengal and seems to have little basis in fact. In South Dinajpur district, there was a large mound that locals called Bangarh. Excavations in the 1930’s and 40’s revealed the ruins of a large fort under the mound, but the origins of the fort remain unknown. In colloquial Bengali, the Baan Raja legend is used to express great antiquity, similar to the expression “Mandhatar Amol” (মান্ধাতার আমল) or the “age of Mandhata”, referring to a king in Hindu mythology.

Existence of the temple is recorded in the “List of Ancient Monuments in Bengal”, published by the Public Works Department of the Bengal government in 1896. The publication records the fascinating origin legend of the temple. The linga, it says, is said to have been brought to the riverside from inside a small forest located some 400 yards to the east of the riverbank. The jungle, some ½ a mile in length and breadth, occupied a piece of land that was elevated from the surroundings by as much as 20 feet. The place was called “Deulpota” by locals at the time, who thought it was once a garden belonging to Baan Raja. “Bricks of small size and portions of brickworks” were scattered all over Deulpota, and in the centre of the jungle was a small pond, near which could be seen the ruins of a temple. The linga or phallus was apparently discovered within this ruined temple some 200 years before the publication of the book.

Local legend states that a cow, belonging to the Brahmin residing in the area, would venture into the forest every day, and when it came back, upon trying to milk it, the Brahman would discover that all its milk was gone. One day, he decided the follow the cow into the forest and found it depositing all its milk onto the phallus within the temple. That night the Brahman had a dream in which Lord Shiva appeared and commanded him to have the linga removed, and have a temple constructed for it on the banks of the river. The Brahman was a poor man, and couldn’t afford to build a temple and hence approached the local Zamindar, Raja Suddharam Ghoshal, who in turn instructed his brother, Dewan Hara Nath Ghoshal to erect the temple, which he dutifully did in in 1708. The temple in 1896 is described as being “an ordinary pucca room”, 10 square feet and some 20 feet in height, with two doorways, one facing the river and one facing the burning ghat. But why would this phallus be referred to as Dakshineswar or the Lord of the South?

LEGENDS AND MYSTERIES OF DAKSHINESWAR

But what is even more interesting is the nature of the phallus itself – it doesn’t look like a conventional linga at all! The conventional stone phallus is a large projecting piece of stone, on top of a “yoni”, a symbol of the female reproductive organ. Here, while the yoni is clearly visible, as are Nandi and Bhringi, Shiva’s two bulls, the linga itself, rises barely a few inches. Local legend states that since devotees worship the linga by pouring water over it, this had caused the linga to erode over time. But could water being poured over a linga cause it to become “damn near worn down to the nub”, as Morgan Freeman says in the Shawshank Redemption? It seems unlikely. There are lingas, extremely large ones, in Kolkata, which are also of great antiquity and have had water poured over them for more than 2 centuries, without ever showing any sign of damage. So what’s going on here?

Journalist Gautam Basumullick, an authority on Bengal’s Hindu heritage, speculates that the linga may not have been a Shiva Linga at all, but rather “Baba Thakur”. Bengal, before formal Hinduism became the norm, had a large number of folk deities, who were worshipped in various parts of the state. As Hinduism was aggressively promoted, forst by Shashanka and then by the Sena dynasty between the 11th and 12th centuries, many of these deities came to absorbed within the folds of the religion and became “elevated” to Hindu deities. Binoy Ghosh traces how Rajballabhi Mata deity of Rajbalhat had similar origins in his book Pashchimbanger Sanskriti. Dharma Thakur is another example of a folk deity, who is still worshipped across the state, as are Dakshin Ray and Ban Bibi. Basumullick points to the presence of another temple to Baba Thakur, in Kolkata, in Hidaram Banerjee Lane of Bowbazar. Here, the Baba Thakur origins have been forgotten and the idol, usually a simple flat piece of stone, is worshipped as Shiva. Could the Dakshineswar Shiva linga of today have been a folk deity absorbed into Hinduism? It is difficult to be sure.

From the description of Deulpota, it appears to have been some kind of architectural mound. Who knows what would have been unearthed if only the site had been carefully excavated. However, no such excavation was carried out and the whole area has been levelled and is heavily populated today. The area has a number of ponds, and it difficult to identify any one of them as the pond in the Deulpota forest. The original 10X10 room has subsequently been built over, possibly during the 19th century, and is now covered by a larger room with thick neo-classical columns and iron beams. A plaque above the entrance to the 10X10 room still bears the name of the Dewan Hara Nath Ghoshal. Another plaque on the wall behind the linga contains the name of Ashok Kumar Gangopadhyay along with a date, but is so dirty that it is impossible to read. Another plaque on the exterior of the temple details renovation work carried out by members of the Mitra family in 1990. But perhaps the most interesting plaque of all, is on the outside of the temple, to the memory of Pat Petit Clerc, dedicated by “Megan, Gavin, Tomas, Debra and Usha” of Laguna Beach, California, USA. A google search reveals that Pat Petit Clerc was a friend of Usha, i.e., Elizabeth Usha Harding, an American journalist and Kali devotee, who set up a Kali temple in Laguna Beach. How curious!

But for all intents and purposes, the Dakshineswar Shiva temple, though historic, is neglected. Few visit it, and few worship there, apart from locals. Fewer still, remember that Ramakrishna Paramhansa himself had once offered prayers in this humble temple. Such is the fame of Rani Rashmoni’s Kali temple, that the temple which gave the village it’s name, has been all but forgotten.

For their help with this article, I gratefully acknowledge and thank my teacher, Dipankar Basu, journalist Gautam Basumullick and Santanu Palit and his family.

Email ThisBlogThis!Share to TwitterShare to FacebookShare to Pinterest
Labels: Hinduism, Temples of Bengal, Temples of Calcutta

Wonderful article! I was searching for information on Baanraja of Deulpota. Thanks.

Thank you for providing important information about baanraja of deulpota!

Thank you for reaching and commenting Sumana