Located 13 km away from the city of Mysore, atop the Chamundi Hills, is the Sri Chamundeshwari Temple, one of the 51 Shakti Peethas of the Hindu religion. The legend of the Shakti Peethas originates from the story of King Daksha, whose daughter Sati married Lord Shiva against her father’s wishes. Determined to attend a “yajna” at her father’s house, the uninvited Sati did what would today be called gate-crashing. But she was disrespected and humiliated by her father. Unable to bear the insults she immolated herself. The enraged and grief-stricken Shiva picked up the remains of his wife’s body and began the “Tandava”, the dance of destruction, laying waste to all creation. The panicked Gods appealed to Vishnu to intervene and Vishnu using his disc, the “Sudarshan Chakra” severed Sati’s body into multiple pieces. These pieces then landed in various parts of the Indian subcontinent, and in each place there exists today a Shakti Peetha, each spot corresponding to a body part. On the Chamundi Hills, it is said, it was Sati’s hair that fell. 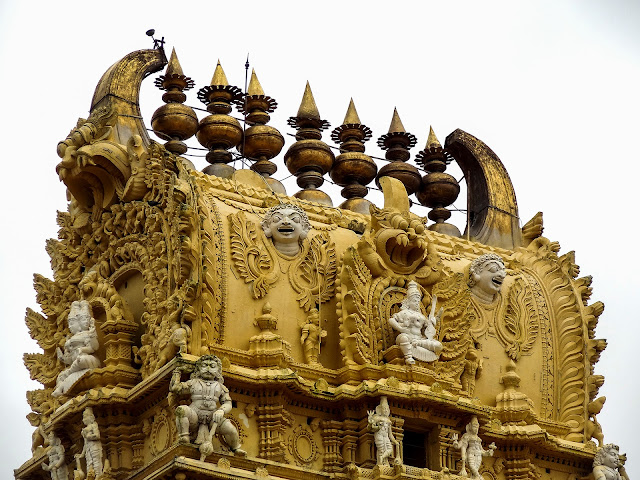 The original Chamundeshwari Temple was a considerably smaller shrine, which was probably constructed around the 12th century by the Hoysala kings of Karnataka. The Hoysala Empire eventually gave way to the Vijayanagara Empire, and Vijayanagara rulers probably added the temple’s tower, or “vimana” sometime in the 17th century. The Vijayanagara Empire eventually collapsed and Mysore came to be ruled by the Wadiyar dynasty. They added a flight of 1000 stone steps leading up to the temple in 1659 and the temple’s ornate and beautiful “gopura” in 1827. Ardent devotees of the Goddess Chamundeshwari, the shrine grew in importance under the Wadiyars and they undertook many beautification and maintenance projects. 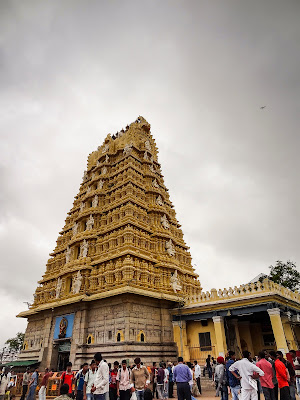 Unless you’re a professional athlete, I would suggest you take one of the many excellent buses to the top of Chamundi hill to visit the Chamundeshwari Temple. The temple itself is built in a typical Dravidian style, with a seven storeyed “gopura” or ornate monumental tower above its entrance. Take some time to appreciate the intricate carvings and figures on the gopura. Apart from the various figures of Gods and demons, notice the 7 “kalashas” on top of the tower. To enter the temple, shoes must first be removed. There is a place where you can keep your shoes, in exchange for a token. Once inside, you will find further carvings on the temple’s stone walls, and coins sticking out from various gaps in the joints. These have probably been left there by devotees, perhaps to appease the Goddess. The plan of the interior is typical of South Indian temples. The idol is said to be made of gold, and the huge doors of the sanctum sanctorum, of silver. It is customary, although not mandatory at temples, to leave a small amount of money in a “pranami” box. In the Chamundeshwari Temple there is an interesting twist to this concept. Instead of leaving money in a box, one may purchase the “prasadam” in the form of laddoos of two different sizes. The larger one is for Rs. 20, and the smaller for Rs. 10. I am not a religious person but I must say they taste delicious, and yes, I had the bigger one! 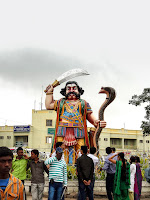 Once you’re done with your “darshan”, walk around and take in the sights. Mysore city will be spread out in front of you and the sight is quite beautiful. On your way down, stop at one of the humble looking South Indian joints and have a cup of true South Indian filter coffee and some steaming hot idlis and crisp fried vadas. Mysore being above sea level is cool all year round, but the Chamundeshwari Temple is even higher, at some 3300 feet above sea level, hence for those who cannot stand a chilly breeze, bringing a windcheater along would be a good idea. The filter coffee helps as well. The best time to visit the Chamundeshwari Temple would be a weekday morning. Avoid visiting on the weekend, unless your idea of fun is standing in a queue for an hour or more. 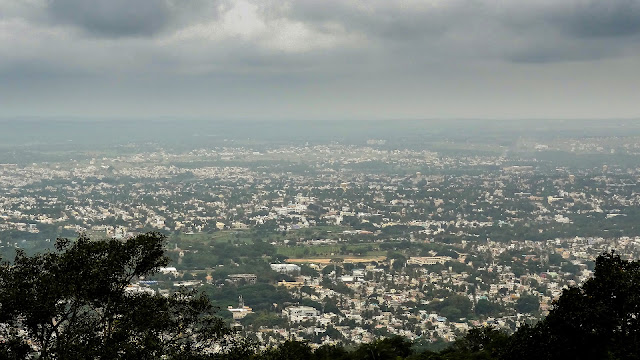 Many thanks to my friend Prasenjit Das for hosting me on this trip and showing me around Mysore.
Posted by Deepanjan Ghosh at 10:39