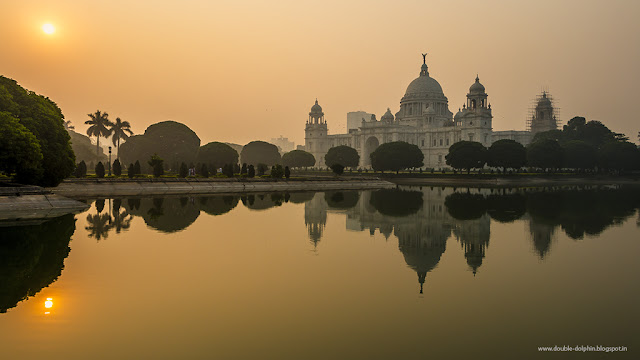 THE PRISON THAT USED TO BE THERE

Let’s begin with origin stories, shall we? In 1767, Calcutta (Kolkata) had two jails, one in Lal Bazar and one in Burrabazar. One was for petty crimes, and one for serious offences. The new Presidency Jail was built where the Victoria Memorial now stands, in 1778. Locals referred to the place as “Harrinbari”. Now “Harrin” means deer in Bengali and “Bari” means house, so the “deer-house”, tradition says, was a hunting box belonging to Siraj-ud-Daulah. It could also have been an enclosed space for captive animals; the Nawab’s zoo. The conditions inside the Presidency Jail were atrocious and families of inmates were often living inside with them. There was a tank or a small pond in the centre of the prison. One of the most famous inmates of the old Presidency Jail was James Augustus Hickey, who started India’s first newspaper, Hickey’s Bengal Gazette. The Presidency Jail eventually moved to Alipore in 1906, and the old structure was demolished to make way for the Victoria Memorial. Frederick Fiebig managed to take a photograph of the Presidency Jail as part of his “Panoramic Views of Calcutta” collection, but I can’t find the damned thing on the internet! 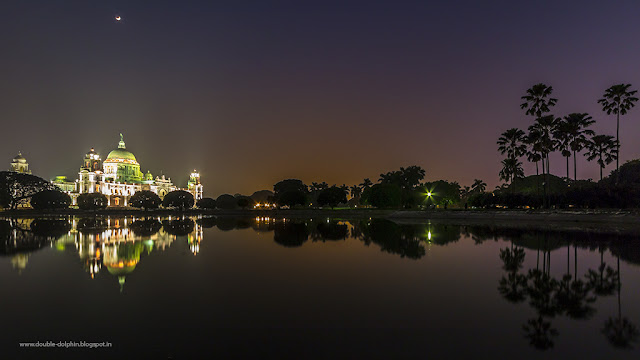 THE PEOPLE WHO FUNDED IT 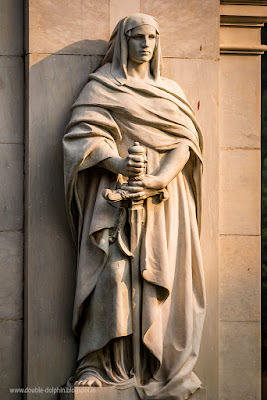 Money for Victoria Memorial came from the people of India. Queen Victoria died in 1901 and the initial proposal was to have several small memorials to her all over India, but Curzon, then Viceroy, was having none of it. He wanted one grand monument, one that British hubris proclaimed to be a rival to the Taj Mahal of Agra, and one that would act as a museum, containing the best of India and of the British in India. Donations were called for from all over the country, and some 76,00,000 Rupees ultimately went into the construction. Now, it is entirely my personal opinion, but asking for money so you can have a great big monument for your dead Queen, seems somewhat strange, even undignified. The British were bleeding India dry, they could at least dig into their own pockets for this. To be fair, the British Government did partly fund the memorial and the vast majority of Indian donors were Princes and the like, who would jump through hoops to impress the colonial masters. How different is it now when Indians are exhorted by television commercials to donate money for a very large statue of Sardar Patel? Sardar Patel is “one of us”, so to speak, and a great freedom fighter. But back then, the Queen was one of us as well, in a manner of speaking. She was Empress of India, wasn’t she? 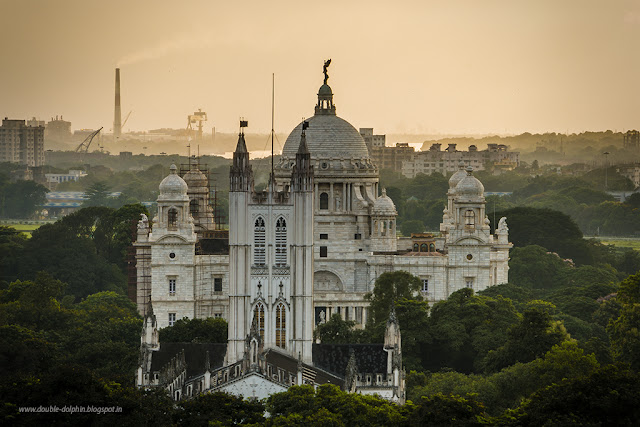 THE BENGALI WHO BUILT IT

Ok, that headline is what is called “clickbait”. We all know that Lord Curzon commissioned the Victoria Memorial and that Vincent Esch was the architect who designed it (incidentally, Vincent Esch was also the architect of the much less glamourous Temple Chambers building, adjacent to the High Court). But who did the actual building? That would be the Calcutta-based firm Martin & Co. Martin & Co. was a partnership between Sir Thomas Acquinas Martin and the Bengali Sir Rajen Mookerjee. Sir Thomas had originally suggested that the firm be called Martin & Mookerjee, but Sir Rajen refused; a native name would make getting European orders very difficult. Martin & Co. was originally only supposed to build the foundations, but their work was so impressive that they were given the task of building the entire monument. The Victoria Memorial is what got Sir Rajen his knighthood. It cost 7,000,000 Rupees to build and used some 200,000 cubic feet of marble. Martin & Co. set up stone quarries in Makrana in Rajasthan to procure this marble. Incidentally, Makrana marble is what the Taj Mahal in Agra is also made of. 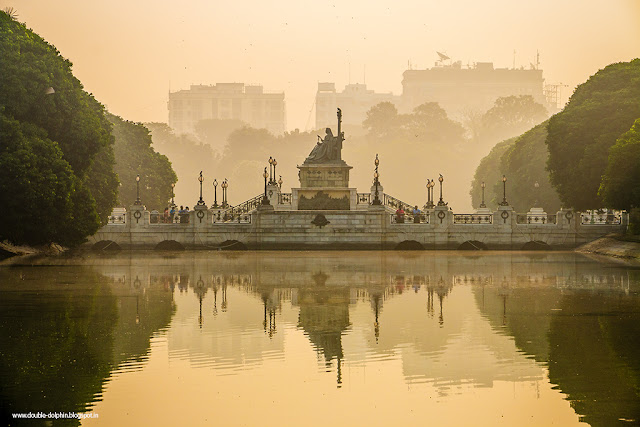 THE LESS FAMOUS ORIGINAL OF THE MORE FAMOUS COPY

The government of Bengal engaged in some serious decolonisation after 1947. Colonial statues from all over Calcutta were removed and their place was taken by Indian ones. Most statues were sent into the wilderness of the Latbagan in Barrackpore, but several were relocated to the Victoria Memorial’s garden. Among them was the statue of General Sir James Outram by John Henry Foley RA. The statue was originally at the crossing of Park Street and Chowringhee. It was unveiled on the 23rd of May 1874 at 6:45 am by Lord Francis Napier. It was replaced in 1958 by a statue of Mahatma Gandhi. In the late 1970’s, that had to be moved to accommodate digging for Calcutta’s Metro Railway. The statue of Jawaharlal Nehru, India’s first Prime Minister was installed on the same spot in 1989. That too must now be moved thanks to damage to its base. But look closely at Outram’s statue and you will be reminded of a famous Calcutta landmark. 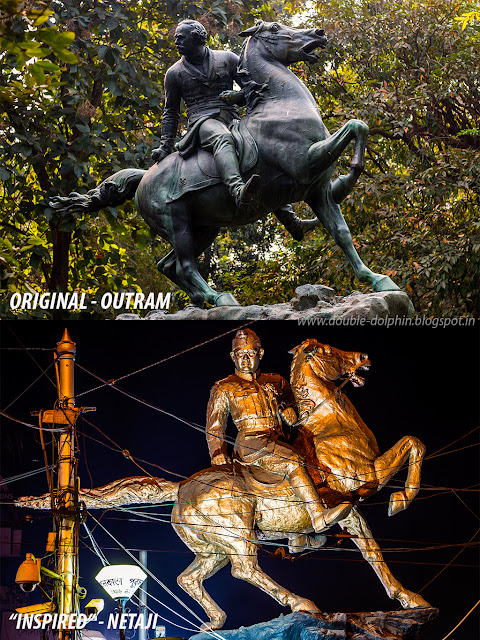 In the middle of the Shyambazar 5, point crossing stands a statue of Netaji Subhas Chandra Bose on horseback. The sculptor was the Marathi Nagesh Yoglekar. It was installed in 1969. It is very clearly a copy of the Outram statue and a very second rate copy at that. My father remembers the controversy the Netaji statue caused when it was installed with people wondering why such an ugly statue was the best that could be found to honour the city’s greatest hero. Both statues are in less than brilliant condition, though. Netaji’s statue is surrounded by ugly wiring and is terribly badly lit. Outram’s statue has sustained significant damage over the years. The horse’s reigns, supposed to be in Outram’s left hand, have broken off as has the sword that was supposed to be in Outram’s right hand.

THE WRITING ON THE WALL

Actually there are two sets of mysterious writings that you encounter at the Victoria Memorial. The first is on the columns near the gate outside. “VRI”… 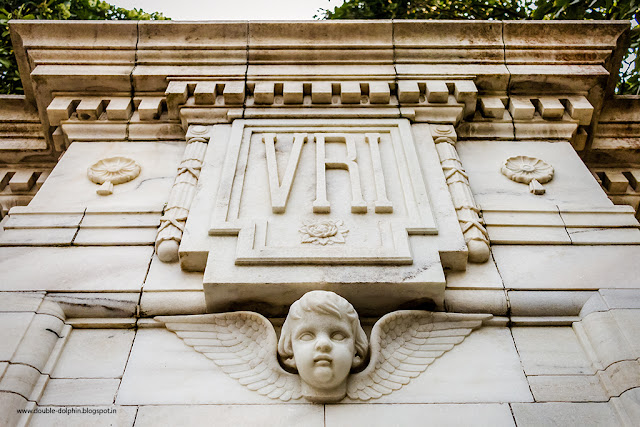 What does VRI stand for? Victoria Regina Imperatrix. What does that mean? Victoria Queen Empress. But isn’t that a redundancy? Not unless the same person is the Queen of two different countries. That can happen when two royal houses are merged through marriage or when your people sneak into a foreign country pretending to be a benign trading body and eventually come to control the entire country, making you its Empress. So, Victoria, Queen of England and Empress of India. Now, what about that second piece of writing? That is a curious phrase found above the entrance to that Victoria Memorial Hall. “Dieu Et Mon Droit”… 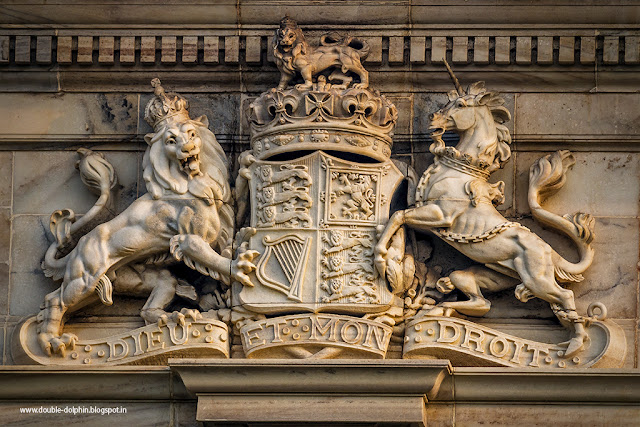 “Dieu Et Mon Droit” is a French phrase which means “God and my right”, which is the motto of the United Kingdom, outside of Scotland. First used as a battle-cry by Richard I and subsequently adopted by Henry V, “Dieu et mon droit” is probably a reference to the Monarch’s divine right to rule. This is the British Coat of Arms and apart from the Victoria Memorial, it can still be seen on only two other buildings in Calcutta. In most places, it has been replaced by the Lion Capital of Asoka, the standard of India. 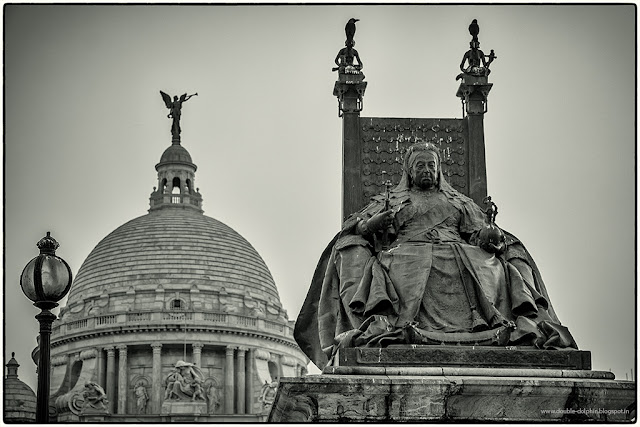 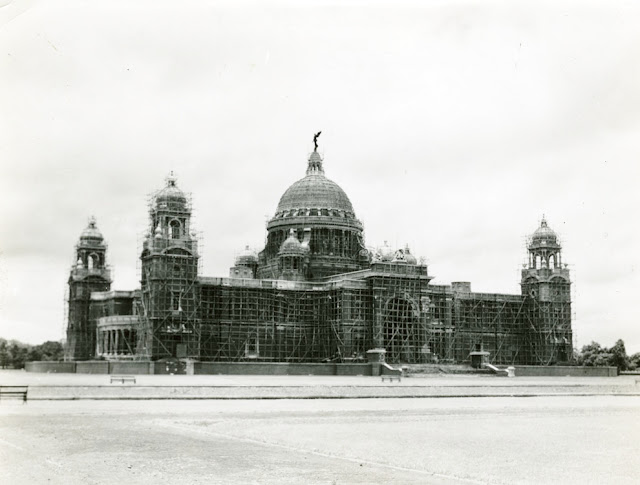 Anyone who has photographed extensively in Calcutta has run into a “Photography Prohibited” board somewhere or the other. You can blame the Japanese for that one. You see, when WWII was raging, there was a very real risk that someone would take photographs of Calcutta’s landmarks and send it to the Japanese Air Force who would then bomb it to smithereens! They did bomb the Kidderpore docks, the Manicktala market (although that bomb turned out to be a dud) and the Dunlop tyre factory in Shahgunj (although that bomb landed in the market adjacent to the factory). The British government in Calcutta prohibited all photography of monuments, but then a giant hunk of marble can be seen quite easily from the sky, especially on a full moon night. The solution? Paint it black!!! The Victoria Memorial is said to be the British Raj’s answer to the Taj Mahal. There are legends about a black Taj Mahal, but that is a mostly unsubstantiated rumour. The black Victoria Memorial, though, is very real, or at least was for a short period of time, around 1943. 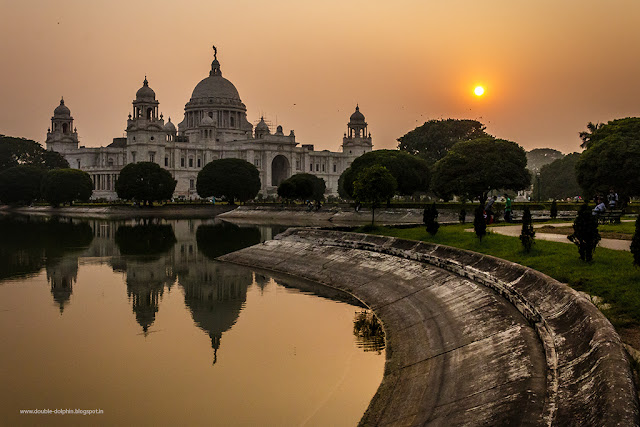 I could also tell you that the Angel of Victory, atop the main dome is a wind vane and that it really does turn, but surely, that is common knowledge. There is, however, one more secret related to the Victoria Memorial, but I’ll save that one for another post.