The Baneshwar Shiva Temple of 2/5 Bonomali Sarkar Street in Kumortuli in North Calcutta (Kolkata) is one of only two surviving terracotta temples of the city. Terracotta means baked earth, and many of Bengal’s temples, notably the ones in Bishnupur, are decorated with terracotta tiles. These tiles depict tales from the Hindu epics, scenes from daily life and society, wars and historic events, or simple floral or geometric patterns. Intricate designs and fine workmanship are the hallmarks of Bengal’s terracotta tiles. But unfortunately, the relentless march of progress has deprived Calcutta of many of her temples. Many have been demolished, many have been lost altogether and many have been “renovated” by rank amateurs, who have simply removed all external ornamentation, smoothed the surface with cement, and added a layer of distemper, often of a gaudy shade. There were probably not many terracotta temples in Calcutta (Kolkata) to begin with since by the time the city became a major centre of art and commerce, the art of terracotta was already in decline. The Baneshwar Shiva Temple is the sole surviving example of it in North Calcutta and it is now under threat. 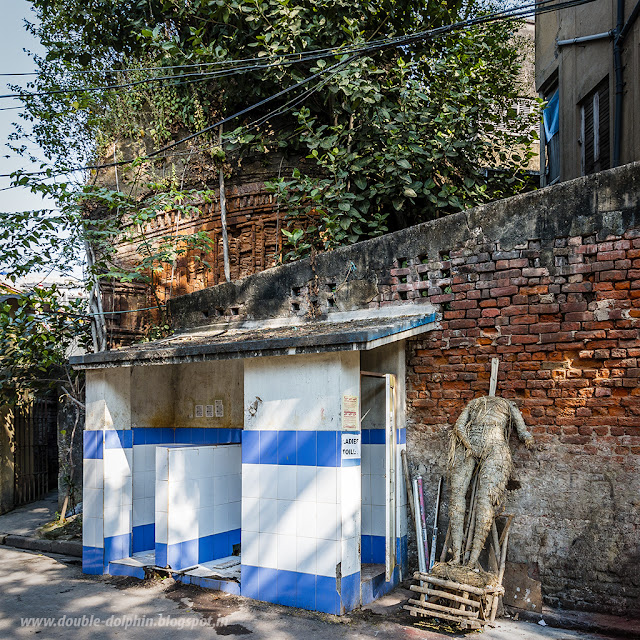 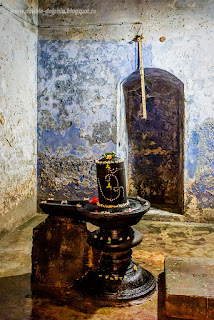 Baneshwar is one of the many names used to refer to the Hindu deity, Lord Shiva. The word Baneshwar is formed by combining the two words Ban and Ishwar. Now Ban in colloquial Bengali means flood while Ishwar means God, but “God of the flood” makes no sense! I am no expert on Hinduism, so I asked my mother, who did the most obvious thing… look in the Dictionary. According to her ancient, cloth-bound Samsad, Baneshwar refers to a Shiva Lingam (or phallus) that has been obtained from the Narmada river. Originating in the Amarkantak Hill in Madhya Pradesh, the Narmada flows through Madhya Pradesh and Maharashtra before entering Gujarat and pouring into the Gulf of Cambay. The river, along with the Vindhya mountain range, has traditionally formed the border between North and South India. There are Baneshwar temples near Pune, Cooch Behar in North Bengal, Goa and even a Baneshwar fair in Rajasthan. Did the Shiva Lingam of the Baneshwar Shiva Temple of Bonomali Sarkar Street also come from the Narmada river? There is no way to be sure. 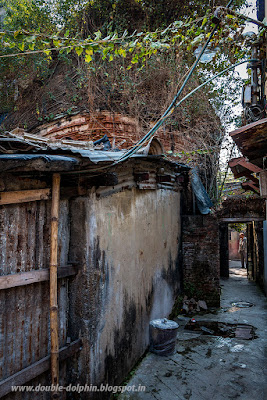 The Baneshwar Shiva Temple is attributed to a certain Bonomali Sarkar, although there are no plaques on the temple’s walls naming him. Bengali children are familiar with a rhyming couplet about four Calcutta men and their fabulous wealth. Among the four was Bonomali Sarkar, who was famous for his palatial house in Calcutta’s (Kolkata) Kumortuli. A member of the Sadgope caste, Bonomali Sarkar was Dewan to the Commercial Resident of the East India Company in Patna, Bihar, and would eventually become the Company’s Deputy Trader in Calcutta. But his family’s story is not a happy one. Of the three brothers, Bonomali, Radhakrishto and Harakrishto, the former two died without male heirs. The property went to Harakrishto’s only son, Krishtomohan, who died without male heirs. The property then went to Krishtomohan’s daughter, Anondomayi Dasi, who died without any children whatsoever, leaving the property and two temples to her nephew Janardan Neogi. He, in turn, would leave them to his adopted son and eldest son-in-law. Bonomali Sarkar had built two temples. One was a temple of Shyam Sundar, a manifestation of Lord Krishna, which has disappeared. The other is the Baneshwar Shiva Temple of 2/5 Bonomali Sarkar Street. The date of construction is impossible to verify, but since Bonomali Sarkar’s house was built in the same area between 1740 and 1750 C.E., the temple may be assumed to have come up around the same time. 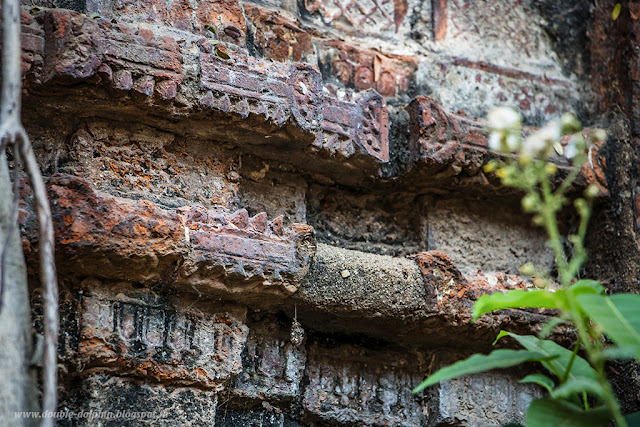 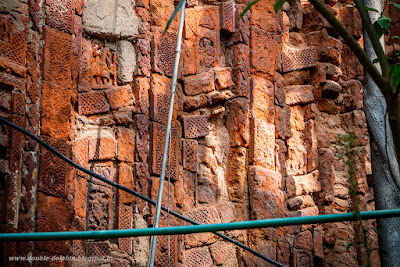 The greatest chronicler of Bengal’s terracotta temples is the Scotsman David  J. McCutchion. McCutchion writes a detailed description of the Baneshwar Shiva Temple in an article published in 1966. The temple, he writes, is of the “Aatchala” type, measuring about 22 feet by 19.5 feet and rising to a height of about 35 feet. The original entrance of the temple was from the south, but McCutchion had found this blocked by a wall. We found a public toilet in front of that wall. Entrance is through a small door on the west. Inside, the lingam is made of “kashti pathar” or Touchstone, which is said to be very expensive. The lingam seems to be broken and a concrete block has been placed under the “yoni” to prevent it from collapsing altogether. The interiors of the temple look uncared for. Plaster is peeling off the walls, cobwebs hang from every corner, and the damp floor is covered in green slime. But what is much more heart-breaking is McCutchion’s detailed description of the terracotta figurines on the temple’s walls. Although in 1966, the temple was already in bad shape, there was enough still there for McCutchion to dedicate an entire paragraph to. He writes about yogis in strange postures, women wearing nose rings and the deities of Narasingha, Balaram and Saraswati. Almost none of this remains. I could only see a few fragments here and there and all the figures near the temple’s spire are concealed by a tree which has spread its roots all over the structure. Daily puja at the temple is conducted by the priest of another neighbouring temple. 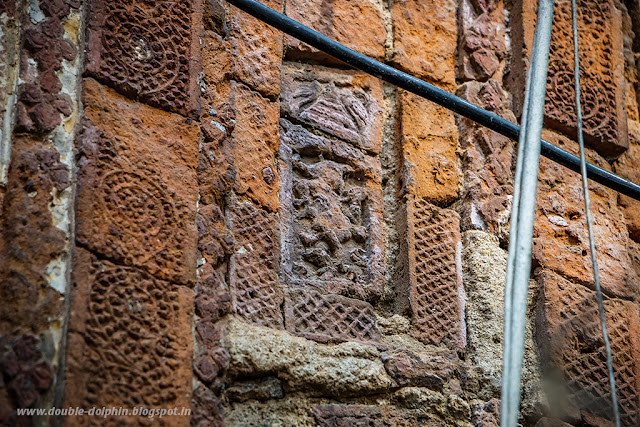 “EVEN IF I KNEW I WOULDN’T TELL YOU” 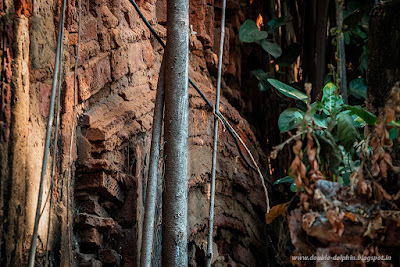 On my walks through Calcutta, I have interacted with many people who own heritage properties. Most have been welcoming, some have been irritated, while a few have been openly hostile. The present owners of the Baneshwar Shiva Temple, the Biswas family, appear to be of the third category. I was accompanied by fellow blogger Soham Chandra (aka Wanderlust) who met with a member of the family and asked if they had any documents that could establish the date of construction of the temple. The gentleman’s response was, “even if I knew I wouldn’t tell you. That information is confidential”. Dude! Seriously? I wonder what the gentleman imagines we will do with his temple. Steal it perhaps? But he did tell us something alarming. The Biswas family were in touch with the local municipal councillor who had promised to have the temple “renovated”. Let me tell you what that means in Calcutta. All the terracotta will be removed, the surface of the temple will be smoothed with cement, and it will be painted a garish colour; probably the municipal shades of blue and white. There are many other examples of this disastrous “renovation”. Chief among them is the historic “Firinghi Kalibari” (Foreigner’s Kali Temple), said to have been associated with the Portuguese poet and Kali worshipper, Hensman Anthony, known to Bengalis and Anthony Firingee (Anthony the foreigner). The temple, which is said to be 500 years old, now looks like it was built in the 90’s, and I do not mean that in a good way. If this “renovation” does happen, that will be the end of the Baneshwar Shiva Temple, at least as far as its heritage status is concerned. However, with no interest from INTACH, ASI or even the Calcutta Municipal Corporation, this seems inevitable. 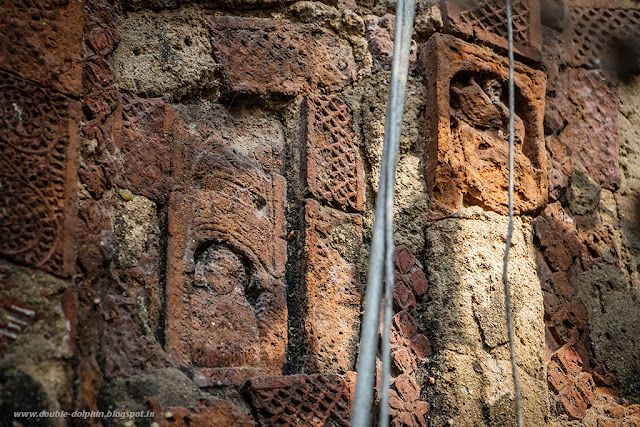 DIRECTIONS TO THE BANESHWAR SHIVA TEMPLE

Many thanks to my friend and fellow blogger Soham Chandra for accompanying me on this trip. Soham has done a wonderful trilogy on the old Shiva temples of North Calcutta. Check out Part 1, Part 2 and Part 3 of his Shiva Trilogy.