Around 60 km to the North of Calcutta (Kolkata), in the Hooghly-Chinsura municipality may be found the magnificent Hooghly Imambara. An Imambara, also referred to as a Hussainia, an Ashurkhana or Imambargah, is a congregation hall for Shia commemoration ceremonies, especially those associated with the remembrance of Muharram. The Hooghly Imambara functions as both a Mosque and an Imambara. With its striking 80 feet tall towers above the main gate, it is the principal tourist attraction of the area. Although the Hooghly Imambara is associated with Haji Md. Mohsin, the original Imambara existed long before he had the present one constructed. 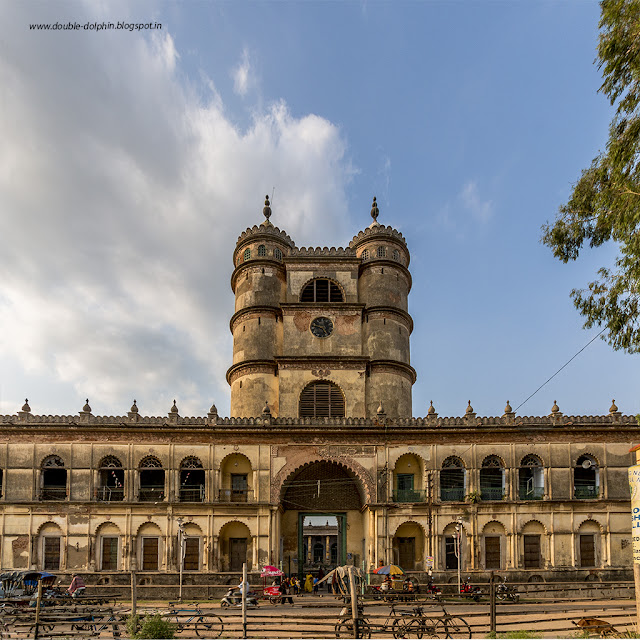 The original Hooghly Imambara, a simple single-storeyed structure, was built by the eminent Persian trader Muhammad Aga Mutahar in 1717 A.D. Mutahar arrived in Hooghly between 1700 and 1710. A trader in salt, Mutahar was a rich man and had a house constructed for himself and his family on the grounds where the present Imambara stands. Unhappy with his personal life, in 1717, he dedicated his abode solely to the almighty Allah and christened it with the name “Nazargah Hossein”. In 1735, his son-in-law Mirza Salauddin added a Tazia Khana to the building, and thus it emerged as an Imambara. No trace remains of this original Imambara now. 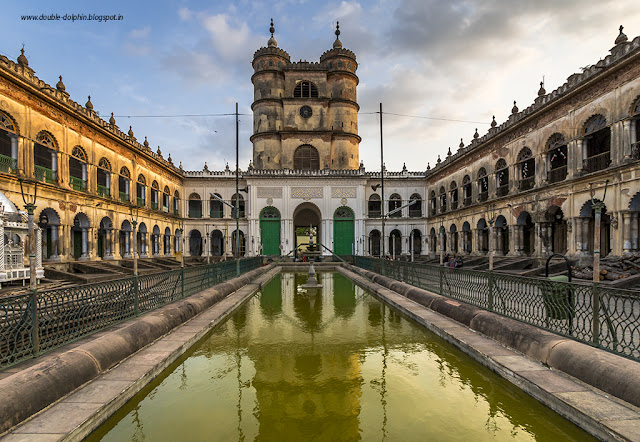 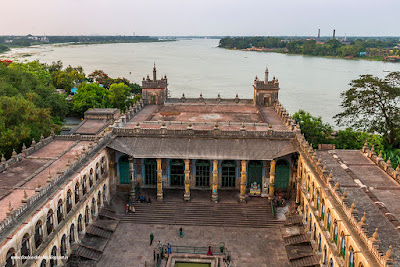 On 1st August 1732, Haji Md. Mohsin was born. He eventually came to inherit the entirety of Motahar’s property. A childless, charitable and generous man, Mohsin donated the entire property for the use of the local Muslim community. But sadly, Mohsin died on the 29th of November, 1812, before the Hooghly Imambara could be constructed. Although Mohsin had made adequate arrangements for the construction of the Imambara, and for a Mutawalli (official or trustee appointed to take care of a Muslim shrine), they failed to take the necessary steps, and their mismanagement and corruption prompted the government to take over the site. Finally in 1837, Syed Keramat Ali was appointed Mutawalli. A nobleman from Jaunpur, Rajasthan, Keramat Ali was a versatile genius with proficiency in geometry, science, and many other subjects. He began planning the Hooghly Imambara in 1841, under the supervision of engineers from the Housing Construction Department. Construction began in August 1845 and was completed in 1861. The total cost of construction was Rs. 2,17,413. 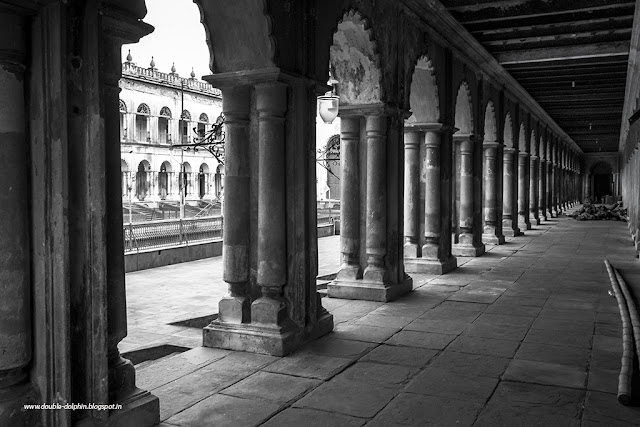 Entering through the grand gateway, we arrive in a vast courtyard. In the middle of the courtyard is a rectangular tank with a decorative fountain. At one point, there were fish in the tank, and the fountain was a sight to behold. Unfortunately, the tank’s clear water is now green with algae, and the fountain no longer functions. The courtyard is surrounded by a two storey building which is now used partly as an educational institution, partly as offices etc. At the North Eastern end of the compound is the magnificent Zaridalan. It is richly decorated. The floor has marble tiles in a chequered pattern. The walls are covered in beautiful calligraphy of lines from the “Hadees”, texts sacred to Islam. Beautiful Belgian glass chandeliers and lampshades hang from the ceiling. 5 elegant and beautiful Tazias are stored inside the Zaridalan. Beyond the Zaridalan of the Hooghly Imambara is the river. 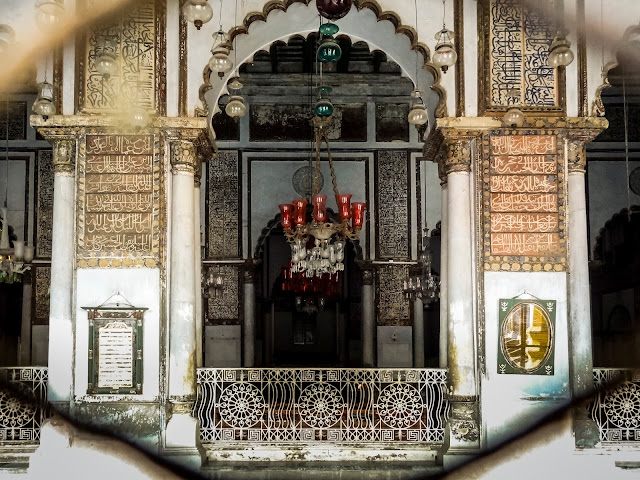 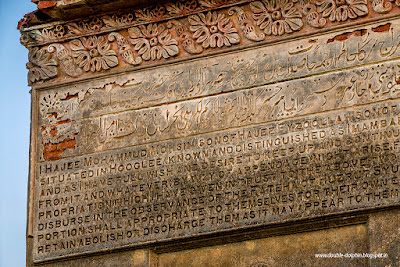 In an open yard to the East of the Imambara is a 3-foot high concrete table with a sundial. The original sundial is said to have been made of brass. Look up at the Northern wall of the Imambara from here and you will find Haji Md. Mohsin’s entire will written in stucco on the wall in English and Persian. Also to be found inside is an exquisite Turkish bath or “Hamaam”. But the most spectacular feature of the Hooghly Imambara are the 80-foot tall twin towers above its main gate. Within each tower is a spiral staircase leading to the top, one is for men, the other for women. If you climb the 152 steps to the top, you will be rewarded with some spectacular views of the surrounding countryside, including the Jubilee Bridge, so named because it was opened in 1887, the golden jubilee year of Queen Victoria. Between the two towers is the Imambara’s giant clock. The clock has two dials, one facing outside and the other inside. Within the Eastern tower is the clock’s “bell room”, containing three giant bells, the smallest of which chimes once every 15 minutes, and the biggest chimes every hour. The clock was manufactured by Black & Murray of London and cost Rs. 11, 721. The key of the clock is some 20 kilos in weight, and two men take 30 minutes every week to wind it up. 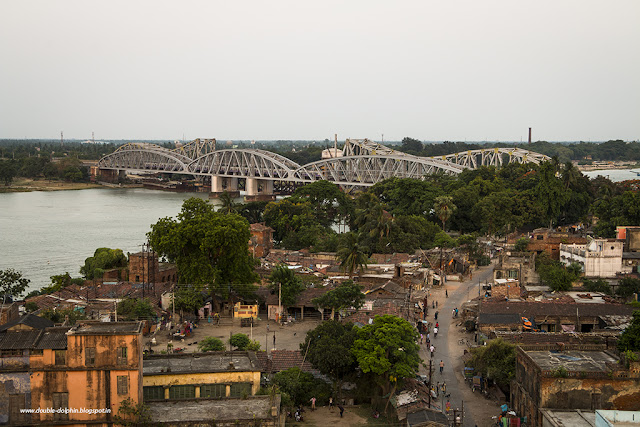 East of the Imambara, a small distance away, are the remnants of a garden, in which may be found a domed structure. Within the structure and around it are the graves of Mirza Salauddin Muhammad Khan, the Faujdar (Military Governor) of Hooghly, his wife Manu Jan Khanam, his father in law, Aga Mutahar and his brother in law, Haji Md. Mohsin himself. East of the garden, is a “haat” or market, which was established by Mirza Salauddin Muhammad Khan which remains active to this day. 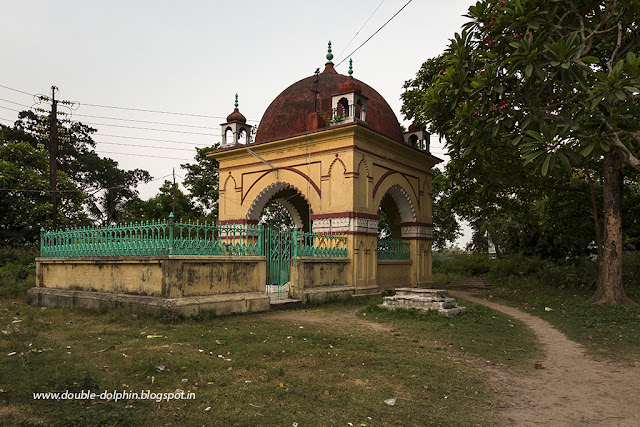 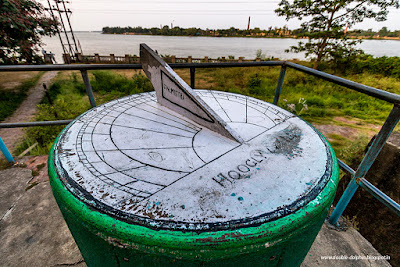 It seems the Hooghly Imambara has had a Hindu caretaker, a man by the name of Mrityunjay Sil, who served until 2000. But today, signs of neglect and decay are everywhere. The plaster is chipping away. Like the sundial, the seven-stepped throne for the Imam was once decorated with silver and gold which is all gone now. The “Hamaam” with its beautiful coloured glass windows is now dark and gloomy. On my most recent visit to the Hooghly Imambara, I found parts of the structure undergoing renovation. I am usually a little sceptical of such repairs. Masons today cannot replicate the delicate stucco work often found on such old buildings and simply plaster it over. If that were to happen here, it would be a tragedy.

NOTES FOR VISITORS TO THE HOOHGLY IMAMBARA 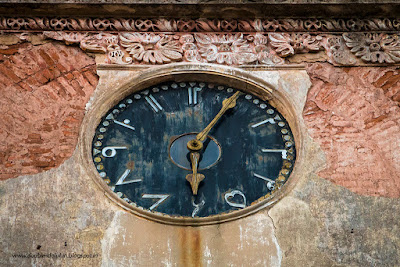 The Hooghly Imambara is open from 8 am to 6 pm from April to August, and 8 am to 5pm from September to March. It is a ticketed monument and tickets are priced at Rs. 10. Entry may be restricted during the holy month of Ramzan/Ramadan. Visitors need to reach the Bandel railway station, which is around 1.5 hours from Howrah and is extremely well connected by rail. From there, a cycle-rickshaw or other local transport may be availed to reach the Imambara. A visit to the Hooghly Imambara can be combined with a visit to the historic Bandel Church, nearby. There is no restriction on photography inside the monument, except within the Zaridalan which the guards do not allow you to photograph. Here is the Hooghly Imambara in Google Maps.

Posted by Deepanjan Ghosh at 10:27