The Lake Mosque is the only example of a mosque in the middle of a lake in the city of Calcutta (Kolkata). It is also one of the city’s many little secrets, because, in spite of the fact that it is right there, staring everyone in the face, many people are not aware of its existence. But how did a mosque come to be located in the middle of the Dhakuria Lake or Rabindra Sarobar, as it is now called? Who built it, and when? Let us begin with the story of the lake itself. 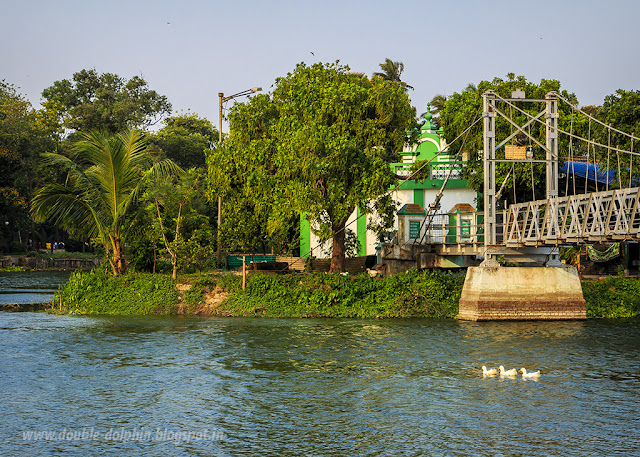 RABINDRA SAROBAR – A MAN MADE LAKE

It is 192 acres in size and yet, information about the Dhakuria Lake is remarkably sketchy. There are very few authors who have actually taken the pains to put down the history of lakes. The kind of specific details that bloggers look for, the day something started, the day it ended, the day of inauguration, that kind of information is absolutely impossible to come by. I suspect one could get it with an RTI application, or by spending a few hours in a government office, but I can afford to do neither. What I present to you now is pieced together by trawling the internet and putting together scraps of information from various books. The Dhakuria Lake or Rabindra Sarobar was originally a large swamp, “shrouded with miasmatic mists”. In the early 1920’s, the Calcutta Improvement Trust (started in 1912 under Lord Curzon), decided to take over the entire area, beautify it, build roads and develop the area for habitation.

The area contained a lake covering some 76.76 Hectares. This was connected to “the extension lake, which was excavated to a depth of 25 feet below the surface of the original one”. Major excavations were finished by 1929. This was called the Dhakuria Lake and was renamed to Rabindra Sarobar in May 1958, in honour of Bengali Nobel laureate Rabindranath Tagore. During the excavations, 3 cannons, 2 large and 1 small were unearthed, which are now displayed on the Southern shore of the lake. These are thought to have been left behind by Siraj-ud-Daula’s army after the siege of Calcutta (Kolkata), although what the army was doing in this part of town, which must have been a complete jungle back then, is something that I cannot understand. In 1926, a cable-stayed bridge was constructed by Burn & Co., connecting the island with the Lake Mosque to the Western shore. In 1962, the wooden surface of the bridge was replaced with metal.

THE FAMILY THAT OWNED THE LAKE

The current Mutawalli of the Lake Mosque is Saifuddin Ahmed. Who is a Mutawalli? A  Mutawalli is a person who manages a waqf property. What is a waqf property? It is sort of the Muslim version of what Hindus call “devottar” property. The property is dedicated to the service of God and ownership is vested in Him, and a person, a human agency, is appointed to administer the property on His behalf. In this case, it is important to clarify that the Lake Mosque is not Waqf, but private property and Mutawalli here would mean something like "custodian". On the phone, Mr. Ahmed told me an extremely interesting story. In the 18th century, his family was one of the residents of the village of Govindpore. In 1756, the Nawab of Bengal, Siraj-ud-Daula laid siege to Calcutta (Kolkata), ousted the British and renamed the city Alinagar, in honour of his grandfather, Alivardi Khan. Hasting and Clive retook the city the following year and defeated Siraj-ud-Daula in the Battle of Plassey. The British found that a major reason for their defeat was that the old Fort William, located where the GPO stands today, was in an indefensible position. The decision was made to build a new fort, which would be surrounded by open fields to provide a clear field of fire. The village of Govindpore was selected as the site, the residents were moved, and the area around it cleared to form what we know as the Maidan today. The Ahmed family was given the area of the Dhakuria Lake as compensation.

The family once owned vast tracts of land in South Calcutta (Kolkata), including the land that now forms Southern Avenue. However during the riots of 1947, feeling insecure in a neighbourhood where they were surrounded by Hindu families, the family moved to Park Circus. Those were chaotic, murderous times, and the family lost control of much of the land they owned and many of the documents proving their ownership, perished. The family home stood where the Calcutta Rowing Club or CRC stands today, and of the properties they once owned in the Dhakuria Lake area, the Lake Mosque is all that remains. Mr. Ahmed currently runs a business and resides with his family in Palm Avenue.

It was Sheikh Zaheeruddin, Great Grandfather of the present Mutawalli Saifuddin Ahmed, who had the Lake Mosque constructed around 1824-25. Does the timeline seem a little unlikely to you? Mr. Ahmed is in his late 30's, so was it his Great Grandfather, or his Great Great Grandfather who built the mosque? Also was the mosque originally built on an island? I’m a little fuzzy on this point as well. Saifuddin Ahmed says it was his Great Grandfather’s dream to go for his evening prayers in a boat, which would indicate that the mosque was built on an island and some sort of smaller lake or pond was present even back then, although others say that the island was created to retain the mosque and the lake was dug around it. Ownership of the mosque passed to his grandfather Sheikh Jalaluddin Ahmed, then his father Sheikh Mohiuddin Ahmed and now he has taken over the custodianship of the mosque. A small congregation offers prayers at the mosque on a daily basis, but a larger crowd has been coming over the last few years during the month of Ramzan.

I remember visiting the mosque when I was in school, some 20 years ago, and back then the mosque was in a very sorry state. It has recently been renovated and while this serves the worshippers at the mosque better, it has unfortunately destroyed the heritage quality of the building – it doesn’t look like an “old” mosque anymore. The floors are now marble-tiled, as is the simple “wazu-khana”, where the devout perform their ritual ablutions before prayer. On the Western wall is a simple but large niche, known as a “mihrab”, which indicates the direction of Mecca which Muslims must face when praying. The island was once covered in weeds and bushes. Although these have been cleared the well-meaning attempts at gardening have backfired in a small way. The trees that were planted around the island have not really been trimmed over the years and are now blocking the view of the mosque to such an extent that it is impossible to get a clear shot.

But a much bigger controversy was caused when signs appeared around the mosque in 2013 barring entry to the island for all except those praying at the mosque. The Times of India of 10th April 2013 carried the story about how Keya Chatterjee, a local resident, spotted the notices that placed an embargo on visitors to the island, other than those who offer prayer at the mosque. She photographed the signs and posted them on Facebook, starting a protest. Unfortunately due to its secluded location, the mosque is a favourite with lovers looking for privacy or addicts looking to get high. Neither coochy-cooing couples nor potheads are conducive to prayer, so the notices are understandable, although barring entry to the entire island does look a bit extreme.

To get to the Lake Mosque you need to find the narrow passage to the left of the Lake Club’s main gate. Two metal posts are planted into the ground to prevent cars from getting through. A few metres past the post, on the right, is a large metal gate. Through the gate, a path leads to the bridge which connects the mosque to the shore. However, keeping in mind the signs that have been put up all around the mosque, unless you have very compelling reasons to go inside, I suggest you admire from afar. If you must go in, remove your shoes at the point where you get off the bridge and meet the Imam Md. Naushad and seek his permission before you do anything else. Those entering mosques must be dressed modestly, which means no shorts, even for men. While Islam does not prohibit women from entering mosques, in many places local customs require women to keep out. Do be sensitive to this when visiting. I am happy to say that I was warmly welcomed and shown around. I was extremely touched when a congregant offered me a bottle of chilled water from the mosque's water cooler when he noticed that I was sweating profusely. He may have done so because, in Islam, offering water to the thirsty is considered an act of piety. But I think he did it because Hindu, or Muslim, we are all human after all.

This article would not have been possible without the cooperation of Md. Naushad, Imam of the Lake Mosque and Mutawalli Saifuddin Ahmed. I am deeply grateful to them both.

I don't even know how I ended up right here, but I assumed this submit was good.

I don't recognise who you might be however certainly you
are going to a well-known blogger should you aren't already.
Cheers!