As Calcutta grew from Charnock’s small outpost of mud huts into a major city with a substantial European presence, the need for a proper Town Hall for social gatherings was felt. Up until that time, major gatherings would happen at the Old Court House, which stood where the St. Andrews Church stands today, or at the Harmonic Tavern (presently the grounds of Laalbazaar Police Headquarters), which was frequented by Warren Hastings’ friend, Richard Barwell. On 31st May, 1792, at Monsieur La Gallais’ Tavern the decision was taken to raise funds for a Town Hall, through public lottery. The building was to contain a spacious ballroom, a concert room, dining room, card rooms, dressing rooms, suitable offices and separate entrances for palanquins and carriages, with detached sheds for vehicles and their horses. Through successive annual lotteries, adequate funds were arranged by 1806, and the task of construction was entrusted to Colonel John Garstin, the Chief Engineer.

Garstin’s design was French Palladian, with magnificent Doric columns, and construction began on 1st December, 1807 and was completed and opened to the public on 22nd March, 1814, but problems plagued the Town Hall right from the start. Contemporaries of Garstin, including prolific diarist Richard Blechynden viewed Garstin as a bit of an upstart, and did not approve of his design, or the fact that the building cost a monumental Rs. 700,000 to build. Soon after opening, a portion of the front portico collapsed. Sometime later, the floor of the ballroom began to spring, and the whole structure had to overhauled in 1818-19. As per the terms of his contract, the expenses of the overhaul had to be borne by Garstin, which must have left his critics overjoyed. 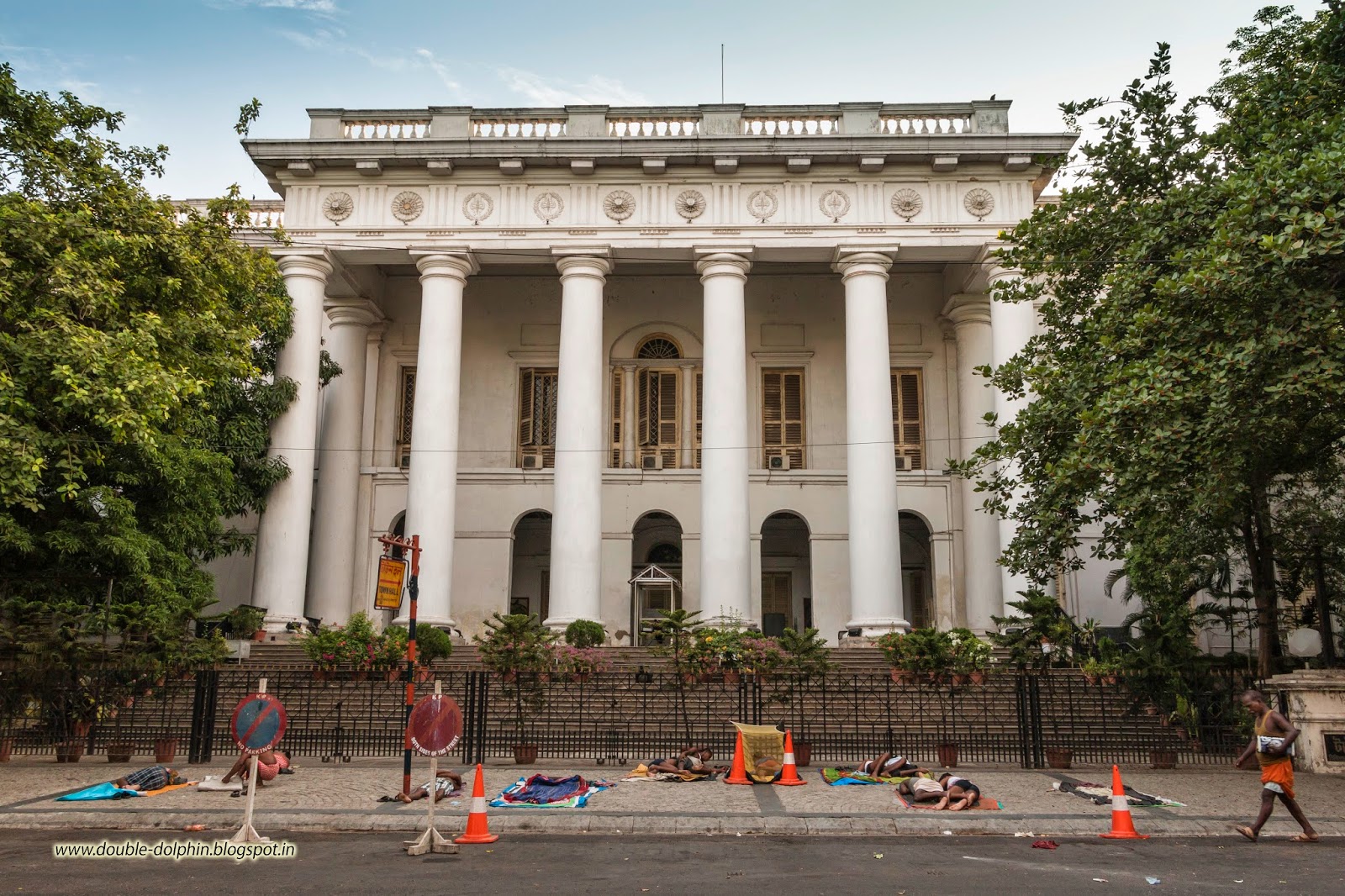 Montague Massey writes in his “Recollections of Calcutta”, that in the era before Saturday Club, fortnightly assembly balls were held at the Town Hall, which were attended by all people of any respectability. Unlike other clubs in the city, the Town Hall had no colour bar, and notable Indians such as Dwarkanath Tagore and Surendra Nath Banerjee rubbed shoulders with Europeans. It was in the Town Hall, that in 1895, Jagadish Chandra Bose ( after whom A.J.C. Bose Road is named) demonstrated radio waves, and their ability to go through solid walls, by detonating a mine inside a closed room. This was a full year before Marconi announced his invention to the world. It was in Town Hall that on 27th August, 1891, the Sherriff of Calcutta, Md. Farooq Shah called a meeting to condole the death of Pundit Ishwarchandra Vidyasagar. A meeting to protest the partition of Bengal was held here as well, in 1905.

Under the custody of the Calcutta Municipal Corporation since 1867, the Town Hall fell into disuse after Independence. With the British, the festive balls and other social gatherings were all gone, and among India’s new leaders, it was no longer fashionable to address people from within the confines of a colonial structure. Various municipal offices took over the heritage structure, some even started living within it’s premises. In 1980, the Corporation made plans to demolish the historic Town Hall and erect in it’s place a modern office block. The citizens of Calcutta however, would have none of it. They formed a “Save Town Hall Committee” and their vociferous protests forced the Corporation to back out. Again, in 1987, information leaked out that the Corporation planned a commercial complex on the lawns of the Town Hall. Once again protests erupted. It was at this point that the decision to preserve it, and use it as a case study for future restorations of Calcutta’s many heritage buildings was made.

But what was to be done with the Town Hall, and where would the funds for it’s restoration be secured from? A lottery was no longer possible. Hence, in an extraordinary step, 24 remarkable oil paintings by Bengali artist Bikash Bhattacharya were auctioned at the Victoria Memorial, and more than a crore of rupees were raised. Corporates stepped in with further funds, and work began in earnest in 1996 for restoration and adaptive re-use of the heritage structure. A curious discovery that was made during the restoration was of the Town Hall’s tunnel-like exposed brick basement. The Corporation’s Director General of Town Planning, Dipankar Sinha says, “back then, there was little by way of water proofing. The bricks in the tunnels are exposed to let the walls breathe. The moisture that rises from the ground evaporates through the walls, thus the upper structure is spared the damp. This delays the decay of a building”. On April 14, 1998, the restored Town Hall was handed over to the Calcutta Corporation. On August 15, 1998, the Town Hall was opened to public with an exhibition of paintings.

Located at 4, Esplanade Row West, the ground floor of the Town Hall today houses the Kolkata Panorama, India’s first hi-tech storytelling museum. The first floor is reserved for cultural functions, seminars and the like. The basement is used for art exhibitions, in particular, sculptures, because paintings would not survive the humidity. The ground floor also houses the Town Hall library, started with the books donated by Calcutta’s barefoot historian, P. Thankappan Nair. The Town Hall is open from Monday to Saturday, from 11am to 5pm, and is closed on Sundays and public holidays. 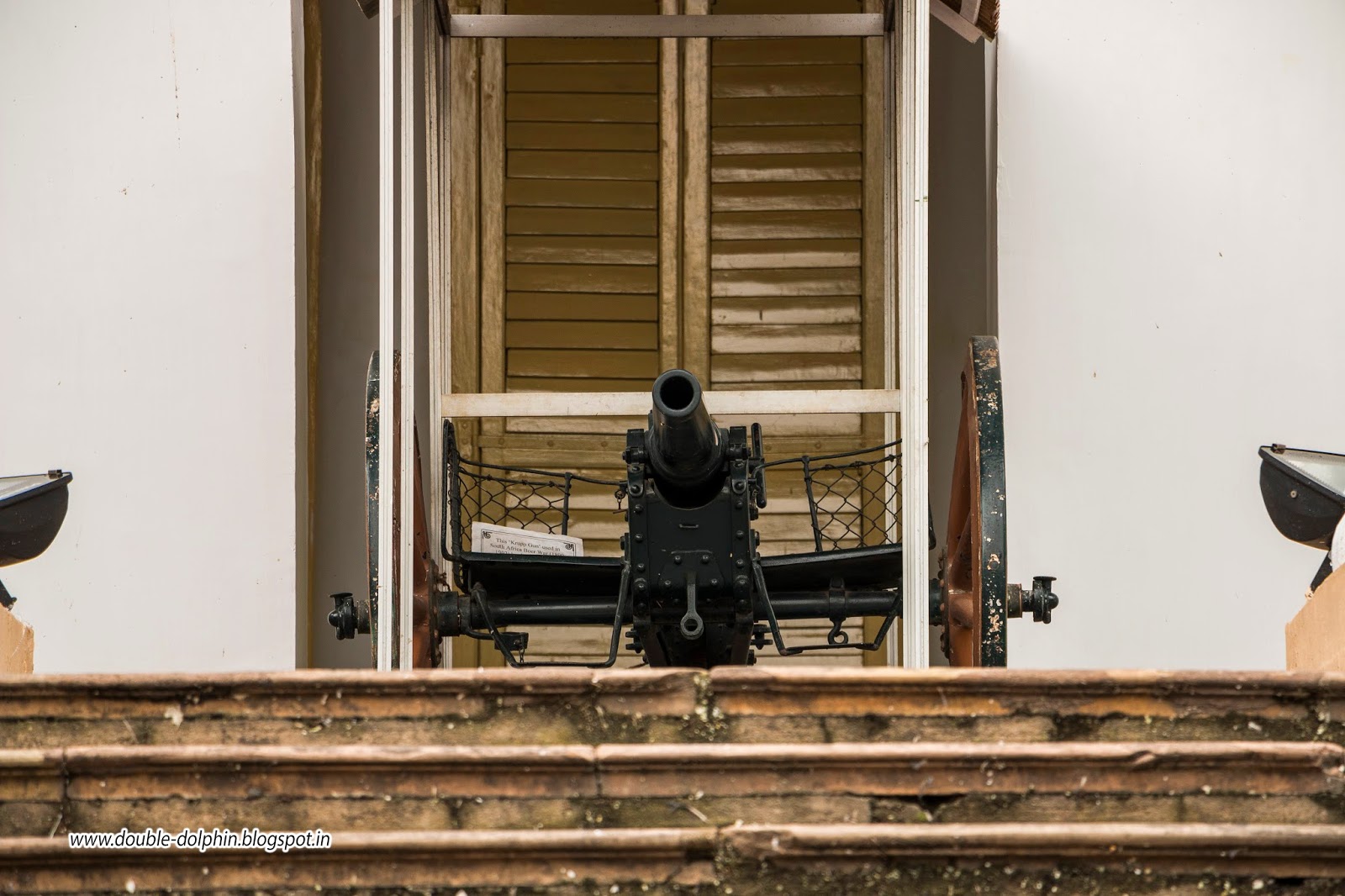 Seen on the steps of the Town Hall is the historic Boer War cannon that was gifted to the Calcutta Municipal Corporation by the British crown in 1905. A 75 mm cannon, manufactured by German armaments company, Krupp, the gun was originally in the entrance of the grand staircase of the civic headquarters until the 1940’s, when it was moved to New Market. Within New Market, the gun was for many years a navigation aid to those who got lost in its maze-like interiors. Restored by the Calcutta Museum Society, the gun was moved to the steps of the Town Hall. Manufactured in 1897, it is one of only 4 Krupp guns from the 19th Century still in existence.

Posted by Deepanjan Ghosh at 15:05