Goenka Ghat and its Environs

The flower market at Mallik Ghat, near the Howrah Bridge is certainly not for the faint hearted, or the claustrophobic. Hundreds of stalls and thousands of people jostle for space, bargain and make purchases in an area designed to hold a fraction of that number. But for photographers, it is a paradise. Teeming with life and a riot of colours, it is full of opportunities for those willing to brave the crowds.


We ventured into the melee on a Sunday morning in winter. Our objective was to locate and photograph the ornate ghats behind the market.  A walk across the Howrah Bridge early in the morning in winter is highly recommended, especially if you get there before sunrise. Watching the sun rise over the Ganges, known here as the Hooghly, and watching the first rays of morning light bathe the Howrah station is an experience to remember. The station complex looks rather like a fort when seen from the middle of the bridge. At the Calcutta end of the bridge, get off on the right, or southern side of the bridge and you can descend into the heart of this flowery chaos using a set of worn out and slippery stairs. Passing through the maze that is the market, as you try and get closer to the river, the first ghat you find, right next to the bridge, is the Rai Bahadur Bissessur Lall Hurgobind Sradh Ghat. All that is known about the gentleman after whom the ghat is named is that he was a rich Marwari businessman, and his “sradh” ceremony was conducted on that spot. The ghat that was erected in 1916 was probably meant as a sort of marker and memorial. Infront of the ghat maybe found a raised area with parallel bars. This spot was in use as a wrestling ring by local “pehelwans”. It may still be used for the purpose, but that seems unlikely considering the garbage that is found piled around the corners. Infront of the ghat was also a park, and it’s railings may still be seen, but the park itself has vanished, encroached upon for decades by slum settlements. Nearby are also five banyan trees, each containing a small shrine at its base. 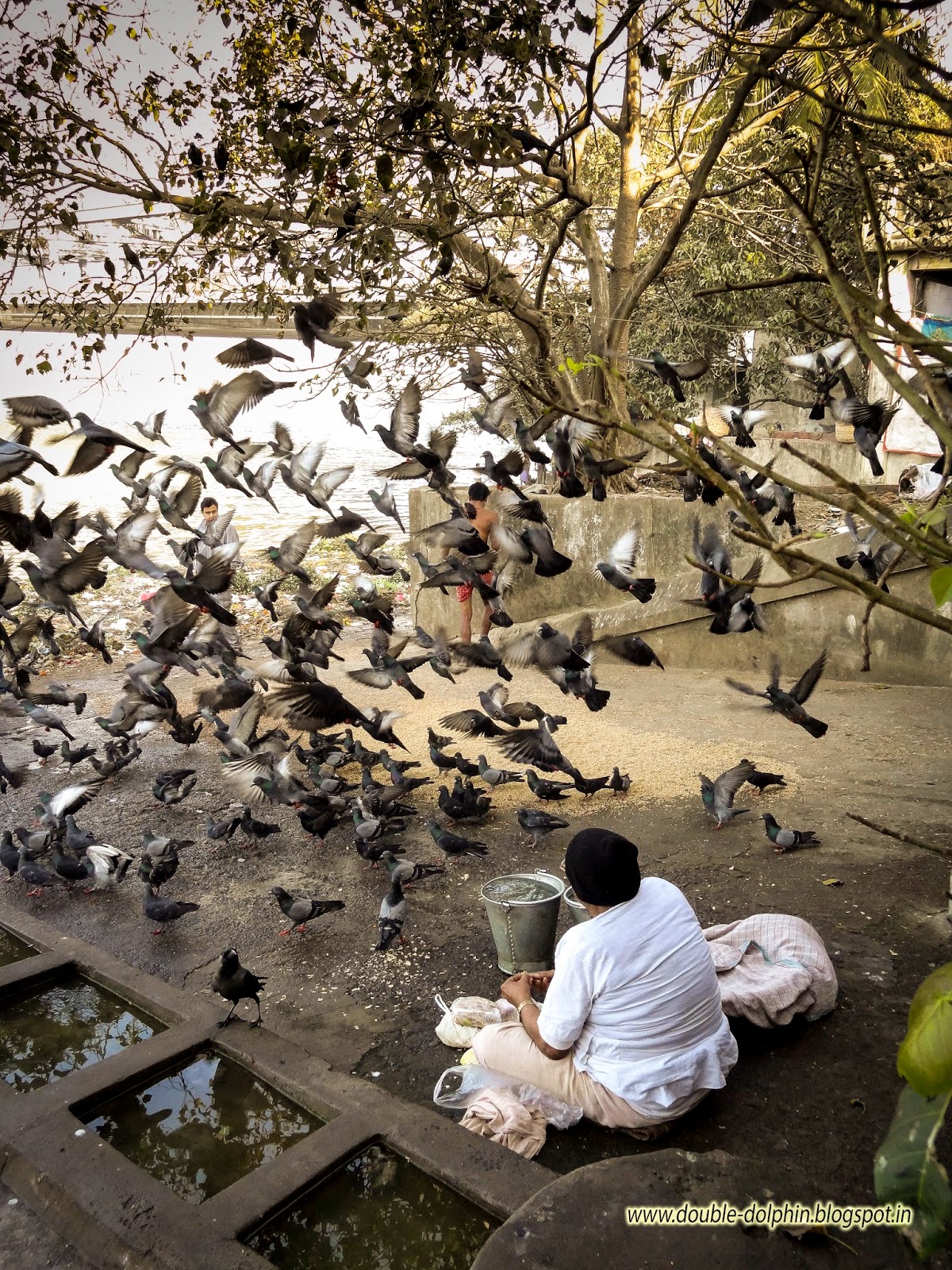 The English word that comes closest in meaning to ghat is probably wharf or quay. While some of the hundred or so ghats that dot the river banks on both the Calcutta and Howrah side of the Hooghly are indeed for vessels to dock in, the majority of them are for bathers. The Ganges is a sacred river for Hindus and a dip in the river at sunrise is considered auspicious. Ornate ghats were constructed by the rich and powerful, as marks of prestige, philanthropy as well as to immortalize a loved one in brick and mortar. A narrow and slippery path leads down to the river from the Bissessur Lall Hurgobind Sradh Ghat. Taking this path, keep going south, further away from the Howrah Bridge, looming in the background and you arrive at a set of steps and a slope leading down to the water. The filth, again, is everywhere. There are mounds of rotting leaves from the flower market nearby, there are people defecating in the open, and in the middle of all this is an elderly gentleman feeding pigeons on the morning. While the pigeons make for a good shot, God help the man who frightens the jittery birds. They take flight simultaneously, with an explosive sound, and an equally explosive torrent of abuses bursts forth from the mouth of their feeder. Unless you want to be shooed away, tiptoe across this space. No sudden movements. Here we found our principal attraction for the morning; the Ram Chandra Goenka Zenana Bathing Ghat.

A “zenana” ghat is one that is only for use by ladies. Ram Chandra Goenka is of the famous Goenka business family of Calcutta. He was the father of Sir Hariram Goenka and Sir Badridas Goenka, and his great great grandsons Harsh and Sanjiv Goenka lead their business empire today. The ghat with it’s beautiful dome and four minars at the four corners is often mistaken for a mosque, and is easily visible to commuters on the Howrah bridge. When crossing over to the Howrah side, simply look out on your left. The interior of the ghat’s dome is quite something to look at, and the fact that great sums of money were spent in its construction is clearly apparent. The floors are marble and beautiful coloured tiles adorn the walls. Unfortunately, there is no escape from the filth here either. Pavements dwellers and vagabonds, drunks and drug addicts, the ghat has become home to all, and they may be found lying or seated in the enclosures originally meant for women to get changed in. Haphazard, and I suspect illegal constructions around the ghat have also destroyed it’s beauty somewhat. The exact date of it’s construction remains unknown (probably between 1880-90), but there is evidence that it has been recently painted and repaired.

Ramchandra Goenka had a reputation for philanthropy.  He had built a “yatri nivas” or travelers’ guest house in the Kalighat area which is presently being used by The Missionaries of Charity as a home for the dying destitute. Hailing from Dundlod, Rajasthan, he built there the beautiful Chhatri of Ram Dutt Goenka and the adjacent well in 1888. He was one of the founders of the Calcutta Pinjrapole, the very first social organization of the Calcutta Marwaris. He also established Vidhwa Sahayak Samiti, an organization that helped widows and children below the age of fifteen, in 1899.

Right next to the Goenka Ghat is the Gunput Ray Kayani Lady’s Ghat. Yet another ladies bathing ghat like the one beside it, but there is no information to be had about the man from whom the ghat takes its name, which is a strange lesson in the fleeting nature of fame.  The ghats, inspite of their filth, are a worthwhile experience. They are a world unto themselves, a world on which the last fifty years of development seem to have had little effect. The river still flows.