For three years of my life, six days a week, I travelled from my home in the Ballygunge area in the South of Calcutta, to Park Street (now Mother Teresa Sarani), in the heart of the city, to attend college. And yet, for those three years, it never occurred to me to peep inside the high walls that stood just opposite the college, on the corner of Park Street and Rafi Ahmed Kidwai Road (previously Karbala Road). Some time in the last few years, one of the two wooden gates of that compound collapsed, revealing a vast unkempt lawn, and a grand building in a truly deplorable state. This ruined building is Murshidabad House, once home to the family of Mir Jafar Ali Khan Bahadur, known to Bengalis simply as Mir Jafar, the archetypal traitor.

Post the Nawaab of Bengal, Siraj-ud-Daula’s sack of Calcutta, a retributory force of the East India Company’s men under Robert Clive faced off with the Nawaab on the battlefield of Plassey. The Nawaab vastly outmanned and outgunned the Company, but for the Company it was a no-contest, since Mir Jafar, commander of the Nawaab’s armies, had been convinced to come over to the Company’s side. The traitor held his forces back, or so the story goes, and the Nawaab was defeated, caught while attempting to flee, and slaughtered. Mir Jafar was installed in his place as the first puppet ruler of Bengal under the East India Company. Except for a small period, this was a position he held till his death in 1765. He was succeeded by his second son, Najmuddin Ali Khan, then his elder son Najabat Ali Khan, then his fourth son Ashraf Ali Khan, then Mubarak Ali Khan, another son by a wife known as Babbu Begum. Several generations and a whole lot of primogeniture later, we end up with Sayyid Wasif Ali Mirza Khan Bahadur who was born in 1875 and crowned Nawaab of Murshidabad (the title Nawaab of Bengal had been abolished in 1880) in 1906.

Wasif Ali Mirza breathed his last in this house on the 23rd of October 1959. By then his estates had been taken over by the Government in response to his having run up a debt of some 19 lakhs. His son Waris Ali Mirza was the last to hold the title of Nawaab of Murshidabad and there has been no clear successor to the line since his death in 1969. It is difficult to say exactly when the house on 85 Park Street came up, though it’s colonnaded verandahs and plain columns with ionic capitals would seem to suggest some time in the 1850’s. Since 1931, when the property was taken over by the government, it has been in a state of limbo, slowly decaying and collapsing. Parts of the cornice and roof have caved in, much of the marble railing at the front is gone, but inspite of all the squalor, there are people still living inside.

Journalist Soumitra Das was able to locate Afshaan Meerza, who was related to the royal family by marriage, and apparently still lives there. A few of the Nawaab’s staff members live on the premises with their extended families. Chickens and children run around in the backyard, expensive cars are sometimes seen parked on the front lawns, and local kids often play football within the premises. There are saree embroidery workshops and some other businesses also operating from within the premises. With the help of the families who had taken up residence in the building, me and my friend Amartya entered the ground floor through a rear door, and found vast, empty rooms, once obviously plush and richly decorated, but now bare, silent, and covered in a thick layer of dust. Where has all the furniture gone we ask? It has mostly been carted off or sold by them, we are told. Who this “them” is, we can only guess. 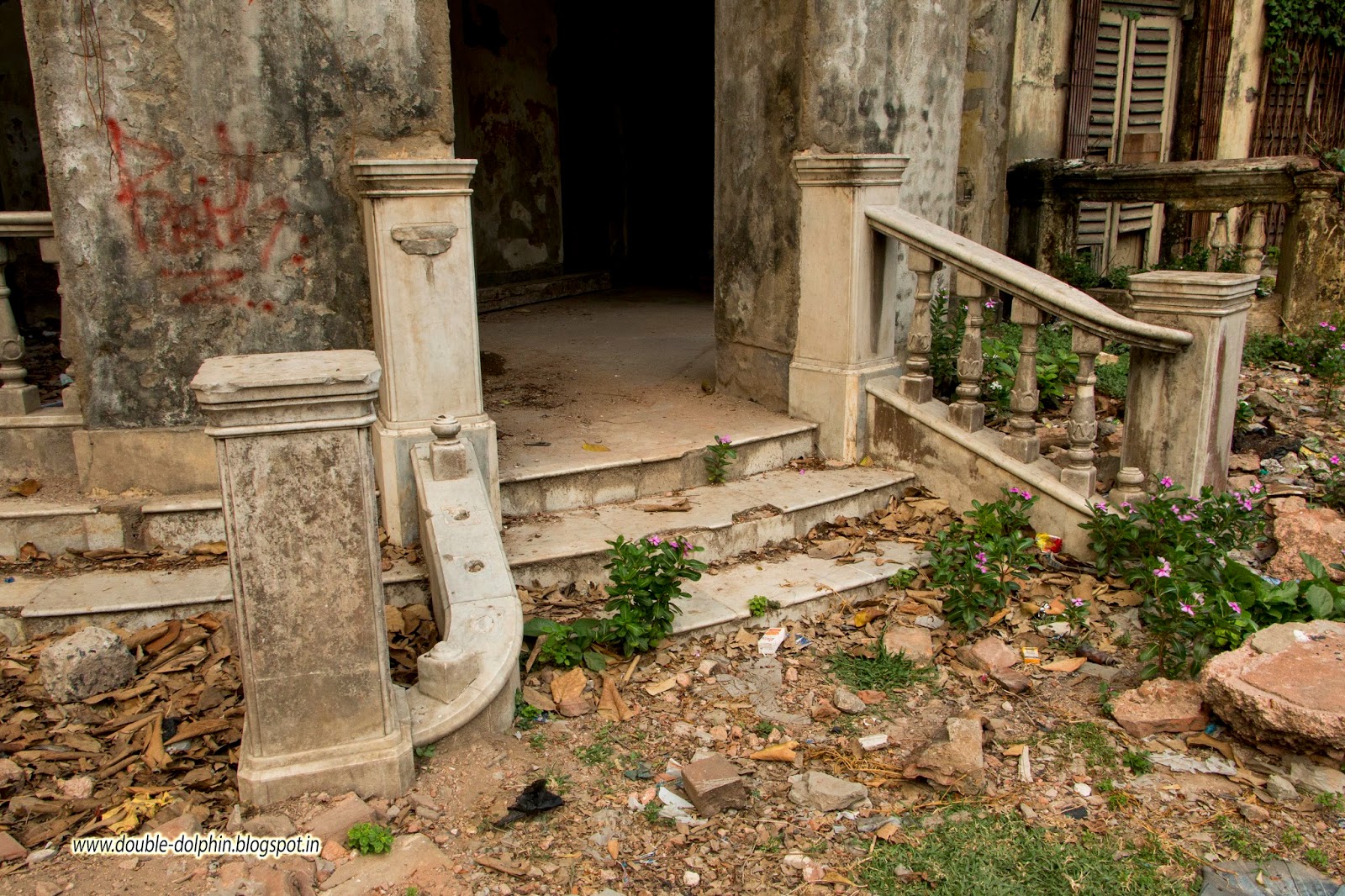 Around 2007, G.M. Kapur, head of the Calcutta chapter of INTACH had attempted to get the building restored, but so far his efforts have come to naught. Can Murshidabad House be saved? Or will it make way for yet another garish, modern, boring commercial complex? Only time will tell.

INTERIORS OF MURSHIDABAD HOUSE SHOT BY AMARTYA SAHA
Posted by Deepanjan Ghosh at 08:20