The oldest mosque in Calcutta (Kolkata) should be called the Basri Shah Masjid, but unfortunately, the name has been anglicized to Bhosri Shah, Bhonsri Shah, or even Bhousri Shah by some chroniclers of the city, such as the venerable Cotton. It is unfortunate because in Hindi, Bhosri literally means c*nt, and is used in the same sense; as an obscenity. But that is not the only thing that is intriguing about this mosque. Its claim to being the oldest mosque of Calcutta also cannot be unambiguously verified; a definite date of construction cannot be found. Neither can I confirm to you its exact address. The municipality’s list of heritage buildings says that this is a Grade I heritage building, and is “popularly known as 1 Lock Gate Road”. Pijush Kanti Roy’s Mosques in Calcutta says that the address is 8 Seth Pukur Road. Ok, so age not verifiable; exact address not confirmable, does it even exist? Oh yes it does! Here it is in Google Maps. See those three green (actually almost fluorescent yellow) domes? That is it. But when it comes to Basri Shah, we are dealing with two structures, not one. Thoroughly confused? Good. Now we can begin. 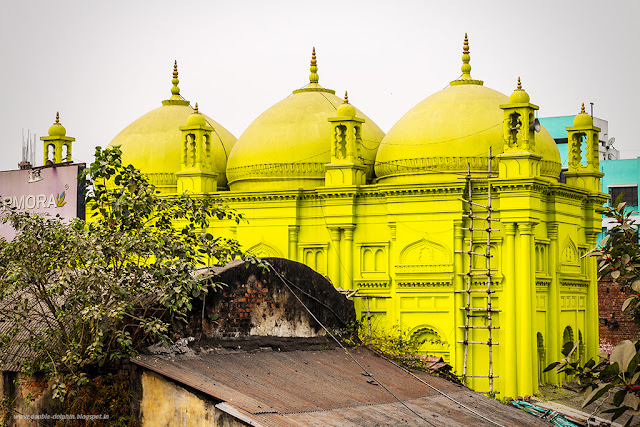 WHO WAS BASRI SHAH? 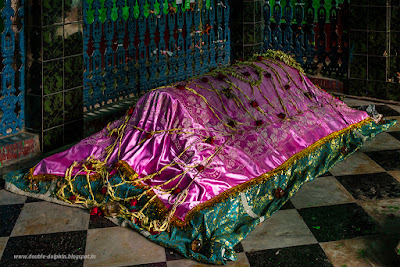 Hassan Basri Shah, not to be confused with Khwaja Hassan Basri Shah, was a wandering Sufi mendicant, revered as a “Pir” or saint. The “Basri” in his name is a reference to his hometown, Basra in Iraq. He is now referred to as Hassan Basri Shah Rahmatullah Alaih. Those last two words mean “Allah’s peace be upon him”, and is customarily added after the names of dead Muslim saints. When did Hassan Basri Shah come to Calcutta? It is impossible to provide a definite date, but it seems likely that it was sometime around the later part of the 18th century. We have no details about his activities here, except that he gained enough of a following to be revered as a saint after his death. His grave turned into a “Dargah” (a Persian word referring to an Islamic shrine built over the grave of a revered figure), and that is why I mentioned two structures, and not one.

THE DARGAH OF BASRI SHAH 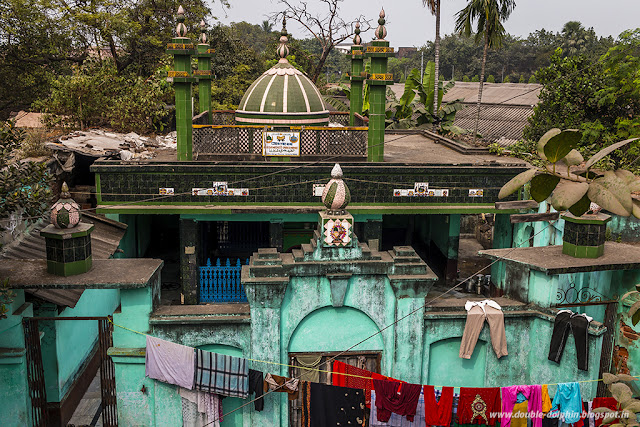 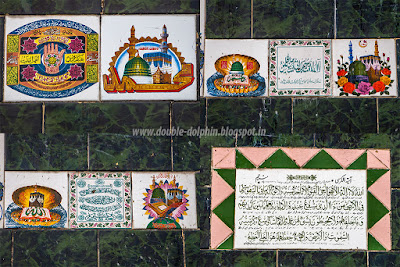 The Dargah of Basri Shah is a small distance away from the mosque that is now known as the Basri Shah Masjid. Go North on Girish Avenue and past the bridge over the Circular Canal. A little further North is a flyover over the circular railway tracks. Get on the left or western flank, but be careful because the flyover has no pavement on the Western side. The mosque and dargah should be immediately visible to your left. A few steps further and you will find stairs leading you straight down from the flyover to the to the dargah’s door. The Dargah was originally a temporary structure, possibly built of wood, and the brick and mortar building that we see today is relatively recent. I say relatively because several lunettes (semi-circular opening above a door) contain cast iron flowers and the like, which went out of fashion ages ago. In the centre of the courtyard, under a covered canopy lies the grave of Basri Shah. Next to it is another smaller “chhatri” like structure which seems to be used for storing things. The tiles on the walls of the dargah are absolutely modern. There are no plaques containing the story of Basri Shah or the date of construction of the dargah. Among the plaques that are there, there is a curious one with a hand and some Arabic inscription. That hand is known as the “panjetan” or the 5 “purified souls”. The 5 are the Prophet, his daughter Fathema, her husband Abu Taleb and their two sons, Hassan and Hussain. The “panjetan” symbol is seen exclusively on Shia shrines, which is what this is. The other inscriptions, all Arabic, are various verses of the Qur’an. The fact that they are Arabic and not Persian probably means that they are relatively new too. 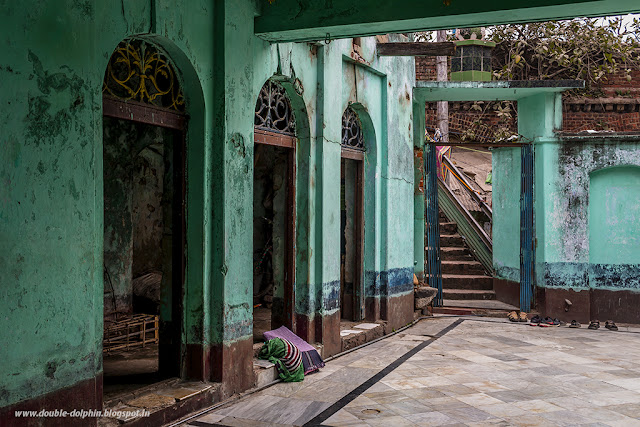 Cotton, in his “Calcutta Old and New” had noted that the Dargah of Basri Shah was “frequented by both Mahomedans and Hindoos, and is reputed to have healing powers”. That legend continues to this day with both Hindus and Muslims taking home water from the shrine in bottles, along with another curious practice. It is common to make a wish at a dargah and leave some money on the grave as an offering. It seems what a lot of people now do is throw money out of their car or bus windows as they are passing the shrine on the flyover. In the short time that I was there, it was literally raining coins! 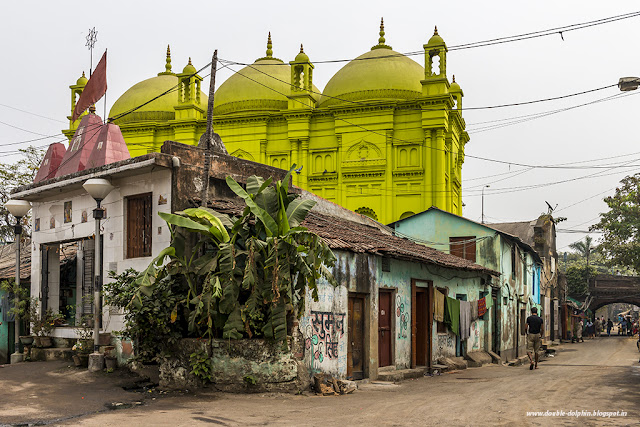 Since the original marble plaque containing the exact date and other details about the mosque has gone missing, we know very little about the origins of the Basri Shah Masjid. One of the sources is the article “The Mosques of Calcutta” by Janice Leoshko in the book “Calcutta through 300 years”. She notes that the original plaque said that a certain Ja’fir Ali had built the mosque anew in 1219 Hijri, which corresponds to 1804 C.E., implying that an earlier structure existed at the same place. The Basri Shah Mosque is one if the few mosques in Calcutta that follows the Bengal architectural style and it has considerable similarities with the mosques of Murshidabad. This has led to speculation that the Ja’fir Ali mentioned in the plaque could have been Mir Jafar Ali Khan, who betrayed Siraj-ud-Daulah to the British East India Company in 1757 at Plassey. But no one can confirm this, not even the present Imam, Tahir Khan Quadri. 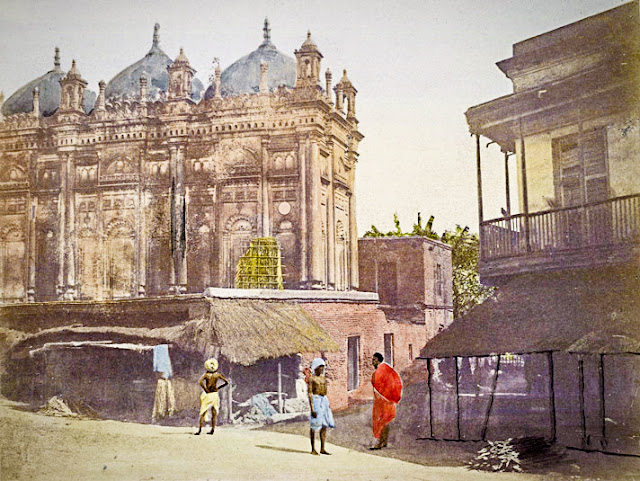 The Basri Shah Masjid was photographed by Frederick Fiebig in 1850, and a comparison with the present renovated structure shows that quite a lot has been lost. The miniature minarets between the larger ones are no longer seen. Gone also is the delicate stucco ornamentation. The mosque was abandoned for a long time and was being used a marble shop until its renovation, in November of 2010. I do wish they had painted it a slightly more muted colour but to each his own. There is nothing that states that Basri Shah was responsible for the construction of the mosque, though. In fact, there is a legend that the Basri Shah Masjid is some 500 years old! I assume it must have been a much more modest prayer hall before the present structure came up in 1804. It also seems that when Hassan Basri Shah arrived in Calcutta, the mosque was already in existence. Therefore, its name cannot be Basri Shah Masjid; it must have been called something else. Another rumour suggests that the mosque was originally called Usha Masjid, but there is no confirmation of this either and thus the curious saga of the Basri Shah Masjid continues. Everyone seems convinced that it is the oldest mosque in Calcutta. No one seems to know how to prove it.

Posted by Deepanjan Ghosh at 11:32