The Gates of Aurangabad

If Calcutta is the city of joy and Paris is the city of love then Aurangabad in the Indian state of Maharashtra is the city of gates. The city owes its existence to an Ethiopian by the name of Malik Ambar. Sold as a slave in childhood, he would eventually rise to become the regent of the Nizamshahi Dynasty of Ahmednagar (which later shifted its capital to Hyderabad). He turned the small village of Khadki into a modern city and equipped it with waterworks and other municipal conveniences. Khadki would eventually come to be ruled by the Mughals and Aurangzeb made it his capital when he was the appointed the viceroy of the Deccan in 1653 and it is after him that the city is named. 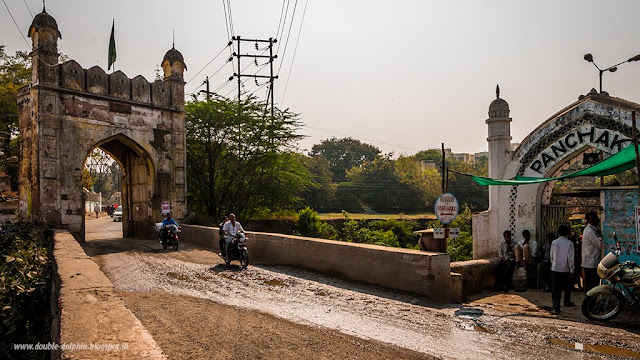 Malik Ambar had erected earthen ramparts around the city for defensive purposes. These were replaced by masonry walls in 1668 which were further expanded under Aurangzeb in 1682, running approximately 10 kilometres in circumference. Along the wall, legend has it, were 52 gates, one for each week of the year. The number 52 may be purely apocryphal, and only 13 (some say 18) of the gates have survived. The trouble is that documentation of heritage structures in Aurangabad is very poor indeed. I managed to locate many of the surviving gates but have little by way of origin stories for each one of them. Most of the gates are arranged around the oldest part of the city. It is important to clarify at this point that the English word “gate” is used in some places while in some others the Persian word “Darwaza” is used with the name. To maintain some uniformity, I have stuck to Darwaza throughout this post. 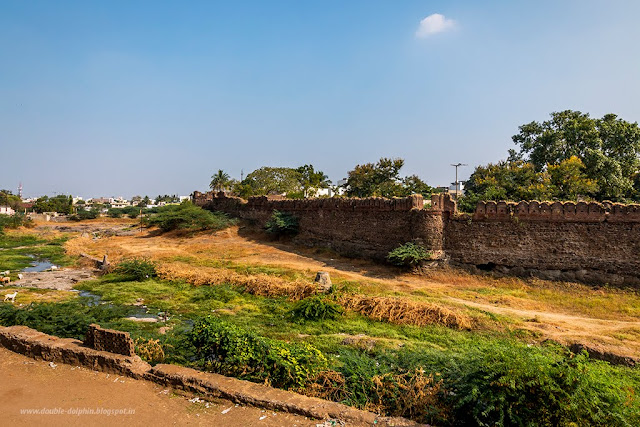 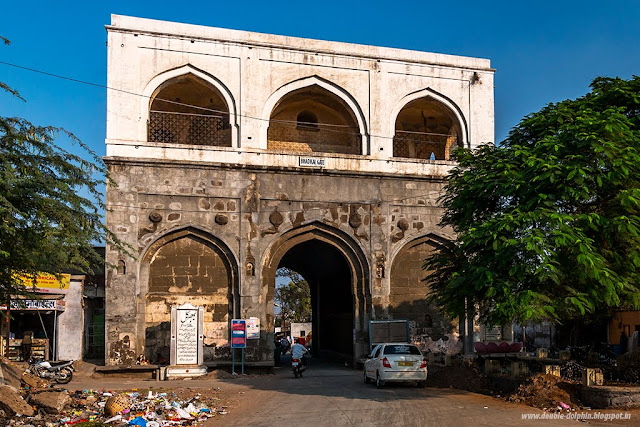 This is probably the best known and best documented of all the gates of Aurangabad. At 62 feet tall, it is also a massive structure. Bhadkal Darwaza was built to mark the victory of Malik Ambar against Abdullah Khan, the Mughal governor of Gujarat, in 1612. The gate introduced the architectural technique of ribbed vaults to the region. The Archaeological Survey of India has put up a board next to the gate detailing its history. Bhadkal Darwaza is the oldest gate in the city of Aurangabad. This is in the lane next to the Shivaji Museum and serves as the de-facto gate for the Shashkiya Gyan Vigyan Mahavidyalaya. Through the darwaza, a little further down and to the left is Alamgir’s Mosque, known locally as the Shahi Masjid. Alamgir was the name given to Aurangzeb when he became Emperor. I have no details about this darwaza apart from a little post on a blog that says that it is a subsidiary gate to the Kala Darwaza. A portion of Aurangabad’s old wall survives here. 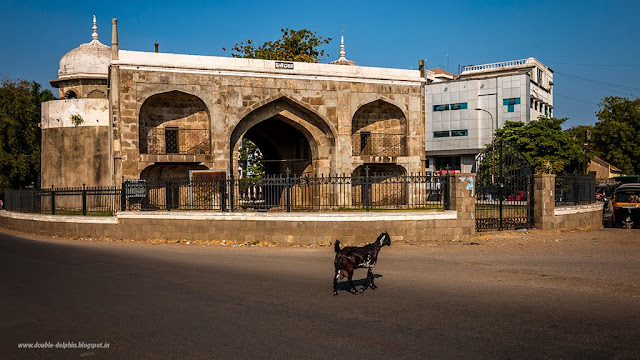 Delhi Darwaza is so named because it faces the direction of Delhi. This is a fairly common occurrence in India and even the Maratha Peshwa’s residence in Pune has a Delhi Darwaza. It is likely that Delhi Darwaza was once part of Qil’a-Ark, Aurangzeb’s palace, which has now been completely obliterated. That would explain why it is built in a typically Mughal style – lofty arched portals leading to passageways, flanked by massive buttresses and topped by battlements. 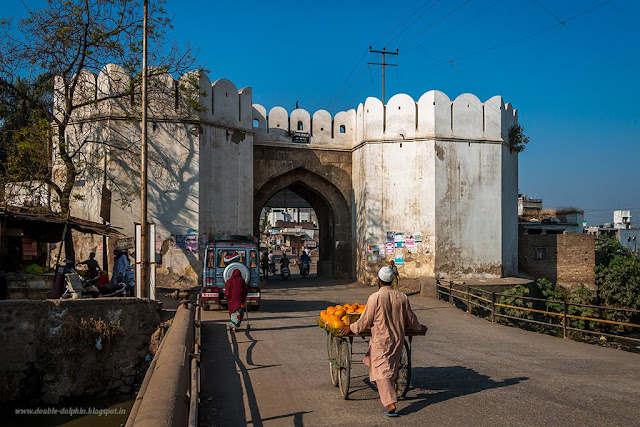 Most of Aurangabad’s gates are in the old city, which would make sense. The modern city of Aurangabad has expanded outside the walls, creating new, posh residential areas. Since Aurangabad was once part of the Nizam of Hyderabad’s domains, there is still a very large Muslim population living in the old city. But why call a gate Islam Darwaza? And why the nickname Kat Kat Gate? Does it make that sound when it is opened or closed? I have no idea! 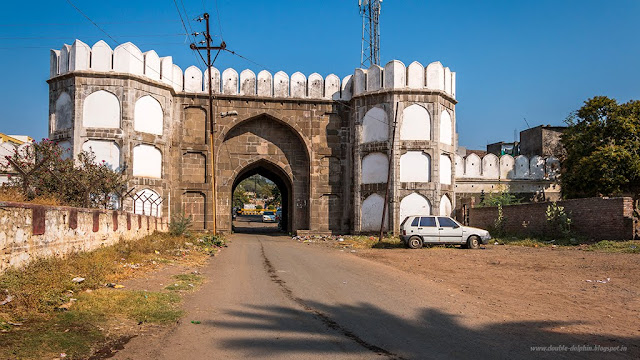 Kala is an alternative (but less common) pronunciation of the word Qil’a, which is Persian for castle or fort. The fort in question is Qil’a-Ark (also spelt Qila–e-Ark), a citadel built by Aurangzeb parts of which may still be seen on a path leading west from Alamgir’s Mosque. For a long time, a part of the citadel was being used by the Government Arts College which eventually abandoned the building, which is now treacherously dilapidated. Kala Darwaza was one of the entrances to Qil’a-Ark. 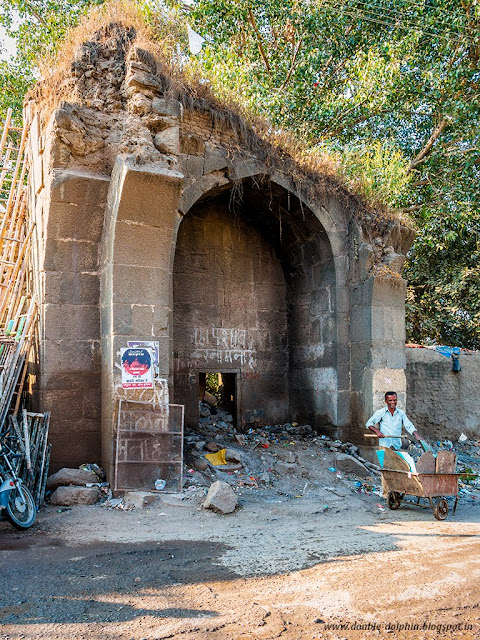 This is easily the least “khaas” (special) of all the Darwazas of Aurangabad. 80% of the darwaza has collapsed from lack of maintenance and what remains is used as a garbage dump and public urinal. The entire area surrounding it has the feel of a ghetto. This is also known as Jalna Darwaza, as it faces the city of Jalna, about 60 km to the east of modern day Aurangabad. 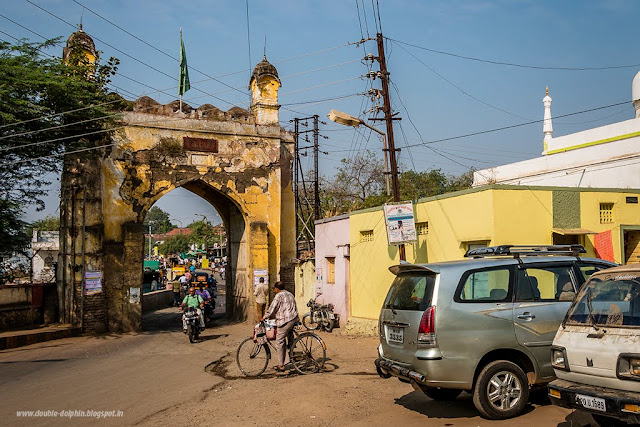 A modest gate, this is located adjacent to the Pan Chakki, or water mill, one of the major tourist attractions of the city of Aurangabad. The gate gives access to a bridge across what may have been a moat around the old city. Parts of the old may be seen surviving here as well. But who was Mahmud? Haven’t the foggiest old chap! 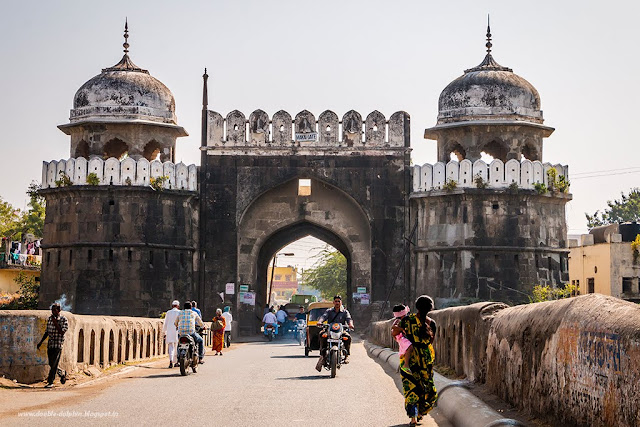 Makai means corn. The Corny Gate?! That seems unlikely, right? Makai is actually a corruption of the word Mecca. Makai Darwaza apparently faces the direction of Mecca or West. 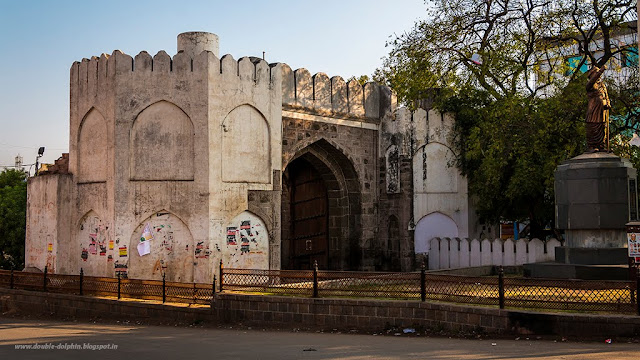 Like Makai Darwaza, which faces Mecca and Delhi Darwaza, which faces Delhi, Paithan Darwaza faces the city of Paithan (originally Pratishthana), 56 km to the south of Aurangabad. Paithan was home to the great Marathi saint Eknath and is famous for Paithani sarees, exquisite silk sarees with intricately embroidered gold or silver borders. 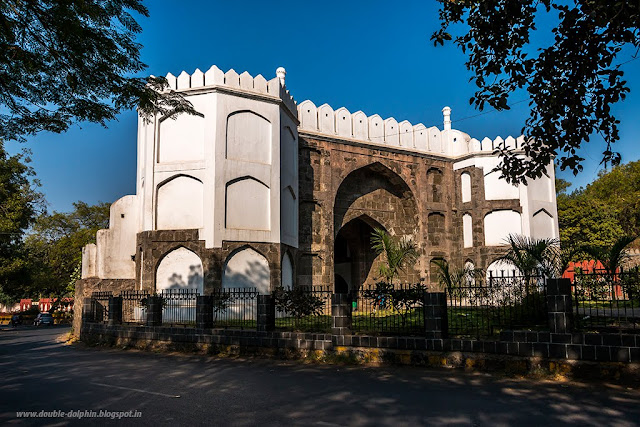 Rangeen Darwaza may have been another one of the entrances to Aurangzeb’s citadel, Qil’a-Ark although I would hesitate to associate the word “Rangeen” (colourful) with Aurangzeb, a man so austere that he forbade a tomb to be built above his own grave! 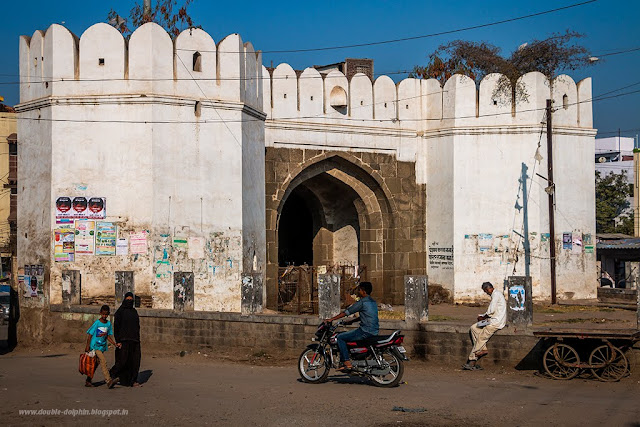 Located to the North of Khas Darwaza (or Jalna Darwaza), this is a large and imposing structure. It would seem it is named after Roshanara, sister of Aurangzeb to whom he was deeply attached. 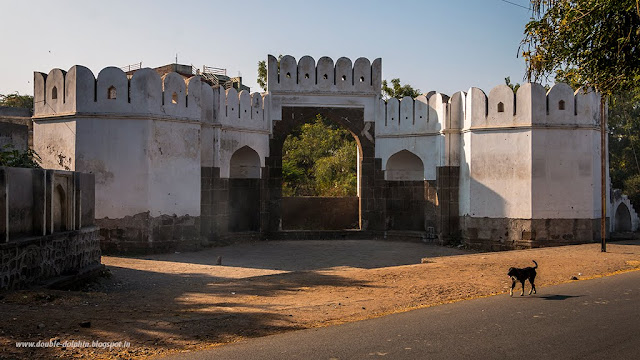 This is located opposite the entrance to the Salim Ali Bird Sanctuary. I guess it has been renovated recently. An old photo of it may be seen here. My sister and I climbed to the top, and I found a 10 rupee note on the stairs! If you happen to be there, give it a try and maybe you will get lucky too! 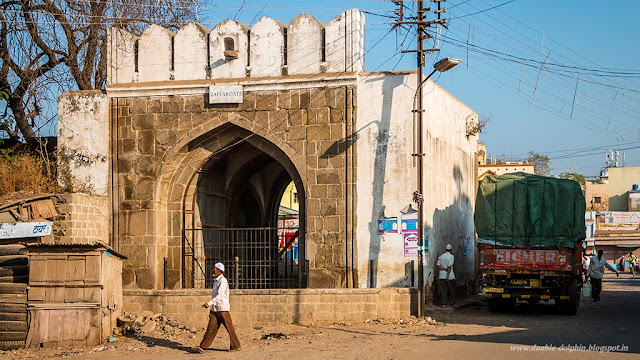 Absolutely no connection to Mir Jafar, who betrayed the Nawab of Bengal, Siraj-Ud-Daula to the British East India Company. No connection to the last Mughal Emperor Bahadur Shah Zafar either. Among other things, the timeline doesn’t match. So who was this Zaffar? Again, haven’t the foggiest old chap! Near the Zaffar Darwaza, you will find one of the few remaining old workshops spinning a luxurious fabric known as kum khaub or Himroo, by hand.

I seem to have missed the Barapulla Darwaza and Naubat Darwaza. There is also mention of a Dargah Darwaza but from the pictures that I can see on the internet, it does not appear to be part of the gates along Aurangabad’s walls. Exploring Aurangabad’s gates can be an interesting way to spend the day, but I suggest you hire a car for the day and ensure that you get one with an experienced chauffeur who knows his way around the city.

Aurangabad with Daulatabad, Khuldabad and Ahmednagar – Sohoni, Pushkar
Posted by Deepanjan Ghosh at 10:13