The Hunt for Evergreen Lodge

A French filmmaker in Kolkata a few years ago, approached me about a documentary on the works of noted Bengali filmmaker Satyajit Ray. He wanted to highlight a side of Ray that remained unknown to French audiences. “We know Ray because of his films like The Goddess (Devi, 1960). But most French people do not know that he also made popular cinema, that he made films for children, and that he was a popular author”. To Bengalis such as me, Ray is of course as much an author as filmmaker. He is the creator of the detective character Pradosh Chandra Mitra aka Feluda, of the science fiction stories featuring Professor Shonku, and of numerous short stories. These short stories more often than not, feature single, unattached men, who live alone and are involved in bizarre, spooky or horrifying incidents. The short stories have been published in collections of 12, with witty names playing on the Bengali for “dozen”. I had finished reading almost all of them by the time I was in my mid-teens. One of the most fascinating stories is one called “Brown Saheb-er Bari”, Brown Sahib’s House. 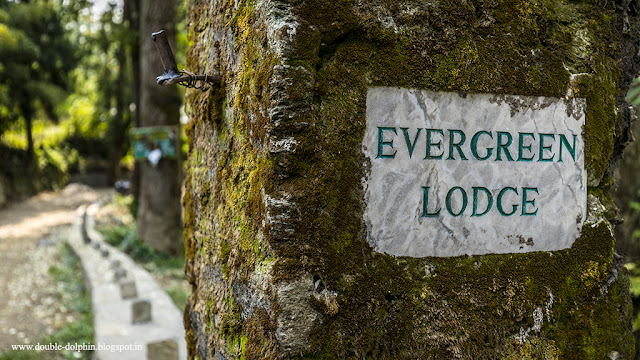 Brown Saheb-er Bari begins with an unnamed narrator who stumbles upon an old diary belonging to a British man named John Middleton Brown. Brown was a schoolteacher and a resident of Fraser Town in Bangalore. His bungalow was called Evergreen Lodge. His wife Elizabeth had died some years prior to the events in the diary, which is dated 1858. In the diary Brown makes repeated mentions of his only dear friend – Simon. He writes with great sadness of Simon’s death because of a lightning strike and then in one final, chilling entry, mentions that Simon has returned to him, from beyond the grave. The narrator, fascinated by the story, sets off to Bangalore and with the help of a friend residing in the city, finds Evergreen Lodge totally abandoned and derelict. Just for thrills they decide to spend a night in the spooky house, and are visited by the ghost of Simon, who turns out to be a black cat. On a trip to Bangalore in 2017, while waiting at a traffic signal, I noticed a board which said “Fraser Town” and all the memories of the story came rushing back. So, Fraser Town was a real place! What else was real? Could there have been a real Evergreen Lodge as well?

There was no time on that trip to investigate, and before I could go back, Ray’s son, Sandip Ray, brought the story of Brown Sahib’s house to the big screen through his portmanteau film “Jekhane Bhuter Bhoy”. In the film, the setting of the story had been changed from Bangalore to Kalimpong and the house that was shown was not a set, but a very real, historic house. My first chance to check out this house appeared quite by accident, when fellow-blogger Poorna Banerjee proposed a short stay at the Mayfair Himalayan Hotel in Kalimpong. The house in the film, I was told, had a connection to Bengali Nobel Laureate Rabindranath Tagore. We set off 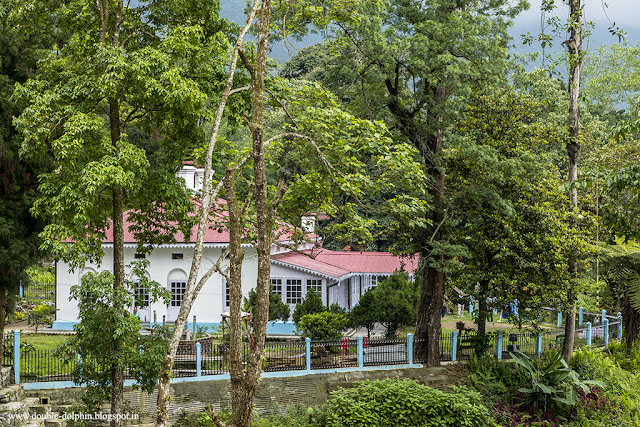 Our driver seemed extremely confident when we told him that we wanted to visit the little hillside cottage where Tagore stayed. He confidently said he knew the place and would take us there. However, we had failed to mention one crucial detail when we briefed him, and would discover our error when we got there. It was a somewhat long drive from Kalimpong to the first house we went to, and my first clue that we were actually headed in the wrong direction was the immensely long drive. The house I was looking for was in Kalimpong. When we finally got to the house, I realized that this was indeed a cottage where Tagore had stayed, but it wasn’t the one we were looking for. This was Tagore’s summer retreat in the little village of Mongpoo. He stayed here for a few months in 1938 and 1939 at the invitation of his protégé, poetess and novelist Maitreyi Devi, author of the well-known novel “Na Hanyate”. The bungalow was originally owned by her husband, Manmohan Sen and was in bad shape until the renovation by the West Bengal Heritage Commission. The final touches to the bungalow were being applied when we were there. The museum was still being set up and many of the rooms were empty and full of the smell of new paint and polish. The bungalow contains a number of documents and assets related to Tagore, which are now being accessed by scholars for research. While it was well worth a visit, it wasn’t what we were looking for. When I had a word with the driver, I realised what the problem was – I had mentioned Tagore and bungalow, but I had not said Gouripur House. Of course he knew where Gouripur House was, he said. We set off again, this time, I hoped, for the right building.

THE ONE IN THE MOVIE 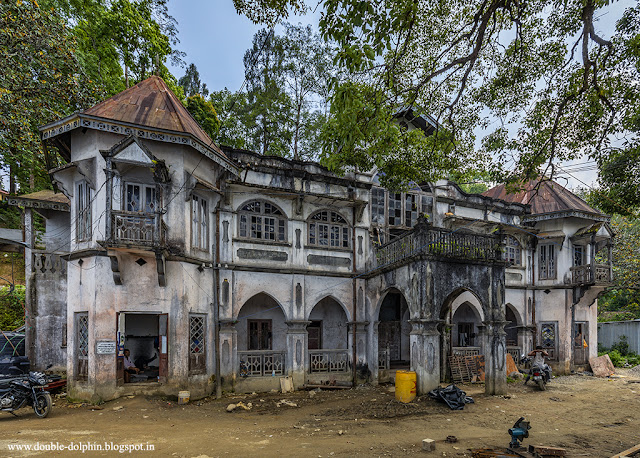 Gouripur House became Evergreen Lodge in Sandip Ray’s film “Jekhane Bhuter Bhoy”. It really does look like a haunted house in its present derelict state. Gouripur House is located in a very quiet part of town, at the top of a hill, at the end of a long and winding road that does not look like it gets any traffic at all. Information about the house is difficult to find. There do not seem to be any English texts about its history. A report in The Telegraph says that the house gets its name from the town of Gouripur in Mymensingh district in what was then undivided Bengal, now Bangladesh. Tagore was on good terms with the Roychowdhury family, the erstwhile zamindars of Gouripur who owned the property and had stayed here on several occassions. On his birthday in 1938, (25th Baisakh, 1345 as per the Bengali calendar) from this house Tagore broadcast his poem “Janmadin” on All India Radio. The building is currently owned by B.K. Roychowdhury of the Gouripur Raj family, who lives in Kolkata. The building looks like no one has lived in it or repaired it since Tagore died in the 1940’s.

For the film shoot, Sandip Ray had had a marble plaque with the words “Evergreen Lodge” placed on the gatepost of the house. In the story, someone had added the letter N to the name, turning Evergreen into Nevergreen. While in the dry climate of Bangalore that name would be apt, here, even the gatepost was covered in a thick layer of moss. When I walked in with Poorna, I found there was a large building being constructed immediately to the north of the historic house. The construction workers had turned the building into a residence of sorts and one of the rooms was being used as a workshop. The grounds had been turned into mulch by heavy vehicles which had brought construction material. As I stood there staring at the house, wondering what it would have looked like in its heyday, a cat crawled out of a 1st floor window onto the parapet and stared down at us. “Look, Simon has come out to say hi”, giggled Poorna. This is kind of thing I fail to understand – a beautiful, historic house, at a beautiful location, going to waste because no one has taken the pains to repair it and put it to good use. This could have been an amazing hotel, but it Bengal, we are happy to let things rot.

THE ONE IN BANGALORE 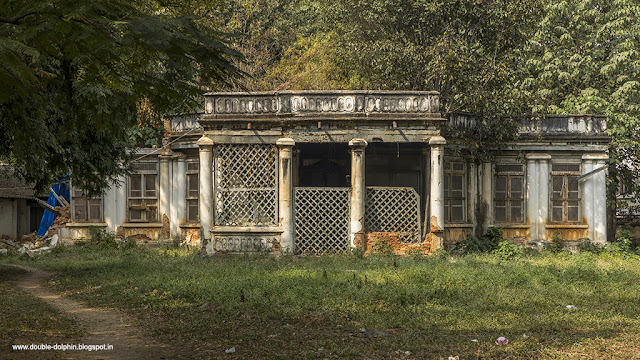 But the most eerie of all the houses was the one that was actually in Bangalore. I was having a drink with my former boss Sriram at a bar on Southern Avenue and I happened to mention Brown Saheb-er Bari to him. Sriram curiosity was peaked. He lived in Bangalore, in Fraser Town. When I described the house to him, Sriram immediately said, “You know what? I know this house. I pass it every day on the way to work”. My pulse quickened. Could this really be the building the Evergreen Lodge was based on? I could only say if I could get a look to the house. In January of 2018 I was in Bangalore, shooting for a story I was doing for Live History India, when I decided to have a look. My friend Prasenjit was driving me around, and the building was on the way to one of the guard posts of Kempegowda that I wanted to photograph, so we made a quick stop.

The building in question is now known as Philomena Pavillion, and is at the corner of Cleveland Road and Promenade Road. But its earlier name was Cleveland Lodge, and it was named after John Wheeler Cleveland who had it built as his residence. Cleveland joined the Madras Army of the East India Company in 1808, in rising to the rank of General in 1868. He retired in 1877 and died in Cleveland Lodge on the 1st of November, 1883 at the unbelievably old age of 92. After his death, Cleveland Lodge passed on to his daughter who in turn sold it in 1887. The property passed from owner to owner, ending up with Rajasabhabhushana T. Thamboo Chetty, whose descendants are the owners even today. Larsen & Toubro were one of the tenants of the property, and it seems likely that it was the residence of one of their senior executives. The property seems to stuck in a legal battle, according to this court document available on the internet, and when I found it, a portion of its western side had collapsed. 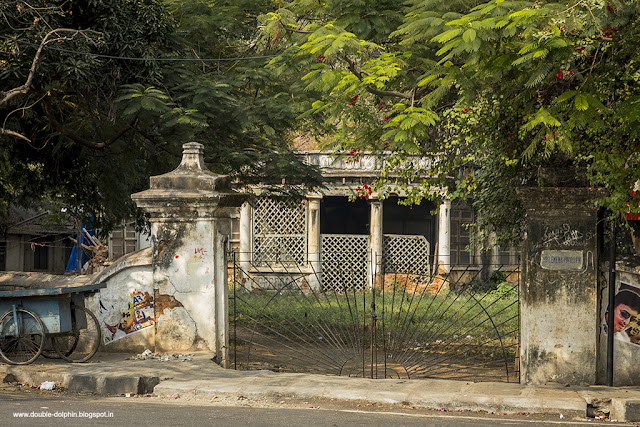 The building did match quite a bit of Ray’s description. It was in Bangalore, in Fraser Town and although it wasn’t an “English cottage”, like he had written, it was very much a colonial bungalow. It was surrounded by an overgrown and unkempt garden with a path down the middle. Could this have been the house that inspired the story? Once I was back in Kolkata, I called up Sandip Ray. He was fascinated by the story I told him, and asked me to send him the photograph of the building. But it was impossible to confirm if this was indeed the house. Ray had been to Bangalore many times, and he was aware of the city and its history. He knew that there had been many colonial residences in Fraser Town, and indeed several of them survive to this day. Ray is also known for incorporating things he came across in real life, into his stories. He worked in an edit studio in Lovelock Lane, for example, and would therefore have seen the Bose family residence on that street, which then ended up in his story “Sheyal Debota Rahasya”. While it is difficult to say for sure if this was THE house, it seems quite likely. My friend journalist Leo Mukherjee, points to a different building in Bangalore, in his article.

Perhaps it is just the faith of a fan. Perhaps I am destined to keep searching for Brown Saheb-er Bari forever. Perhaps I will never find it. Perhaps. But the thrill of the hunt is more than enough compensation.

Loved the blog... so informative...

Wow...i never read the story and hence was unaware of the bunglow is jn Bangalore....although when i watched the film, i wanted to visit the property in Kalimpong..i stay in Bangalore and would definitely check this place..this is really spooky and interesting...

What an exciting investigation! Hunger for knowing increaseth.

Old Bangalore is lost to time. Towns like Frazer town, Cox town, Richardson park are also have few glimpse of the Anglo-Indian buildings. Trees engulfed roads and parks are a sight disappearing thanks to all the population in fall.

It's really amazing to know about this fact. I know the story and have watched the film as well but didn't even think that THE EVERGREEN LODGE was in real.