The Chartered Bank of India, Australia and China, Clive Street

Of all the heritage buildings in Calcutta’s Dalhousie Square area, three are banks. There is the old Alliance Bank of Simla, which failed and got taken over by the Imperial Bank, which later became The Reserve Bank of India. There is Hong Kong House, headquarters of The Hong Kong Shanghai Bank, and there is the magnificent building of The Chartered Bank of India, Australia and China. I refuse to consider the Reserve Bank of India’s depressingly Stalinist looking headquarters a heritage building. The Chartered Bank Building is located at the corner of Clive Street (now N.S. Road) and Royal Exchange Place (now India Exchange Place). With its byzantine theme, and distinctive red and white stripes, it is one of the more easily spotted buildings in the area. 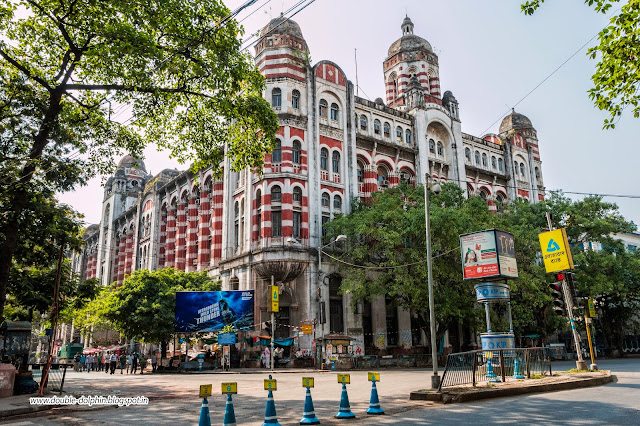 The Chartered Bank was founded by James Wilson in 1853, after he was granted a royal charter. The earliest branches were in Bombay, Calcutta and Shanghai in 1858, followed by Hong Kong and Singapore a year later. With the opening of the Suez Canal in 1869, the bank played a major role in developing trade in the East. Today’s Standard Chartered Bank was formed in 1969 when Standard Bank of British South Africa merged with The Chartered Bank of India, Australia and China. 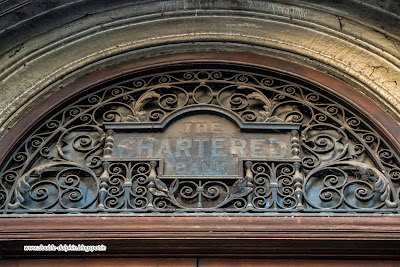 The building was designed by Calcutta based architect Edward Thornton who was working for Sir Rajen Mookerjee’s firm, Martin & Co. Edward Thornton, if you recall, also played a part in designing the flamboyant Royal Insurance Building. The distinctive red and white colour combination is created by the use of exposed brick and Porbunder stone from Bombay. Thornton’s theme seems to be arches, crowned by octagonal towers. A 110 foot tall clock tower may be seen on the Royal Exchange Place side of the building, while another 135 foot tower faces Clive Street. The building was constructed in 1908, and the cost of construction was Rs. 9,62,000. As was the norm at the time, a large number of firms had offices in the building, apart from the bank, including the rival firms of Bird & Co., and F. W. Hielgers & Co. 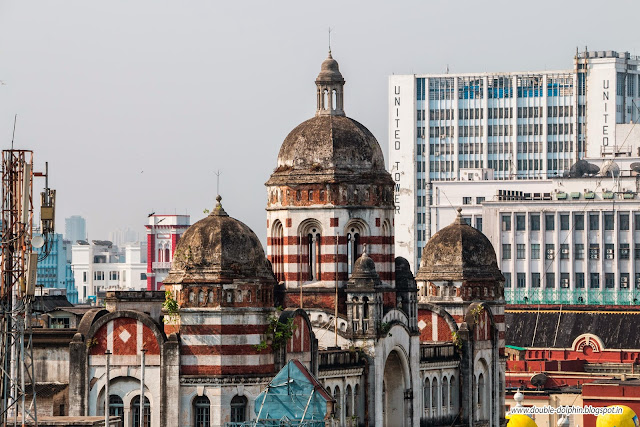 Although Standard Chartered Bank has offices right across the street, and is doing well, I fail to understand why this heritage building has such a forlorn look today. Plants have taken root in the cracks on the upper floors, dust covered interiors may be seen through cracked window panes on the ground floor. I can only hope that some sort of restoration is carried out soon, and the building is put to good use.

I think the lease with the Maharaja of Burdwan is over and there is a legal tussle, so you won't possibly get to see anything encouraging happening here soon