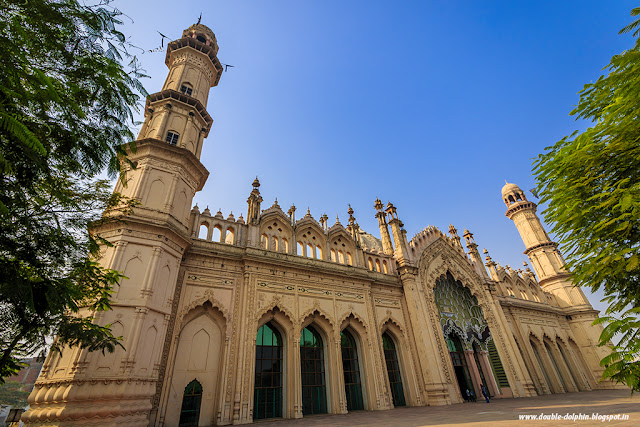 WHAT IS A JAMA MASJID?

Non-Muslims are often confused about this, and to have a complete understanding of it, one must understand a few basic tenets of Islam. Devout Muslims are supposed to pray 5 times a day. These 5 prayers are – Fajr or the dawn prayer, Dhuhr (aka Zuhr) or the noon prayer, Asr or the afternoon prayer, Maghrib or the sunset prayer and Isha’a or the night prayer. Friday is of special significance to Muslims. It is the day Muslims believe Allah created man. This is the reason why in most Islamic countries, the weekly holiday is on Friday and not Sunday and why many Muslim businesses in India remain closed on Fridays. On Fridays, the Dhuhr prayer is replaced by a special prayer known as Jumu'ah or jum`ah. Jumu'ah comes from the Arabic “al-jam” meaning to gather (similar to jama meaning gathering or to collect in Hindi/Urdu/Bengali). Hence, in India, many Muslims refer to Fridays as “jummah”. Jumu'ah  prayers typically draw a larger crowd and mosques are often purpose-built to accommodate this larger congregation. Such mosques are known as Jama Masjid (also spelled Jame Mosque, Jami Masjid, Jameh Mosque, Jamia Masjid or Jomeh Mosque). Jama mosques are usually the main mosque in an area, known as congregational mosques. You will find a Jama mosque in any part of the world where there is a significant Muslim population.

Awadh, anglicised to Oudh, was a province created by Mughal Emperor Akbar in the 16th Century, for the better administration of his vast empire. In 1722, during the reign of the Mughal Emperor Muhammad Shah (one of the lesser Mughals), Mir Muhammad Amin Musawi, a.k.a. Saadat Ali Khan I was made governor of Oudh. His successors would come to be known as the Nawabs of Oudh. In 1775, Nawab Asaf-ud-Daula moved the capital of Oudh from Faizabad to Lucknow. As the Mughal dynasty got weaker and central authority waned, Lucknow replaced Delhi as the centre of Islamic learning and culture in India. On 7th July 1837, Muhammad Ali Shah ascended the throne as the 9th Nawab. Muhammad Ali Shah’s reign ended with his death only 5 years later and it is widely believed that he was poisoned. But like his predecessors, he continued beautifying Lucknow by adding grand structures. Chief among them is the Hussainabad Imambara, also known as the Chhota Imambara (smaller, or lesser Imambara, the Bada or larger Imambara being the one built by Asaf-ud-Daula), the Satkhanda (which was meant to have 7 storeys, of which only 4 were completed), and the Jama Masjid. Lucknow’s Jama Masjid was meant to eclipse all other structures in the Hussainabad area, but unfortunately because of Muhammad Ali Shah’s sudden death, it could not be completed during his lifetime. The work was taken up by his widow, Malika Jahan, and the Jama Masjid was completed in 1845.

Located around half a kilometre West of the Chhota Imambara, where Muhammad Ali Shah lies buried, Lucknow’s Jama Masjid follows the usual form of a square building surmounted by three domes and two minarets. Of the three domes, the central one is the largest. All three are capped by the inverted lotus finial, seen commonly in Islamic structure in India. The mosque stands on an elevated platform and there is a large open courtyard in front of the main entrance. The entire structure is painstakingly decorated with stucco. Above the lofty main entrance is a beautiful honeycomb pattern which is painted a rather unusual shade of pistachio green. The interiors of the Jama Masjid, however, are plain, perhaps to prevent the devout from being distracted during prayer. A simple mihrab or niche shows the Qiblah or direction of Mecca. The lofty minarets of the Jama Masjid are visible from many miles away.

“NON-NAMAZIS ARE PROHIBITED FROM ENTERING THE MOSQUE”

I found this rather unwelcoming sign on many of Lucknow’s mosques, including the Jama Masjid and I was perplexed. In Calcutta, it was possible for me, a Hindu, to freely enter any mosque, except at prayer times. During namaz visitors are kept out both because of the large number of Muslims who come in and the fact that people in prayer deserve some privacy. But according to most of my Muslim friends, some of them very learned, there is nothing in the Qur’an which prohibits the entry of non-Muslims into mosques. One of my friends, in fact, pointed out that “non-namazi” does not necessarily mean non-Muslim, but anyone who is not there to offer prayers. “So does that mean they will stop me, a Muslim, from entering a mosque if I did not want to offer prayers there?” he asked. Modest dress is required, so neither men nor women will be allowed into a mosque if they are wearing shorts, for example, but apart from that there is no official restriction. I wonder why this policy has been so widely enforced in Lucknow?

But I was determined to get a few shots, and so, I removed my shoes and climbed onto the courtyard. If challenged I planned to say, “oh but I am not inside the mosque building, just in the courtyard”. A few quick shots of the exterior were all I needed and I managed to get them without causing a fuss, but I did not try to enter the building, since I could hear a sermon being given inside. It is impossible to obtain a straight, unobstructed shot of the façade of the mosque thanks to its massive size and lack of open space around it. However, I walked around to the rear and found a walled private garden. When I explained that I was a tourist, and wanted a photo, I was let in and managed to get a photo of the mosque’s rear. In front of the garden I found a little outlet of “L.F.C.”, or Lucknow Fried Chicken, which promised to be better and cheaper than K.F.C., but unfortunately I did not end up trying it. If you want to photograph the mosque, please ensure you speak to the people there, and ask for permission. The other good place to get a shot would be the roof of the Bada Imambara, if you happen to have a telephoto lens. The GPS coordinates for Lucknow’s Jama Masjid are - 26°52'22.6"N 80°54'03.5"E.


Beg, Mirza Aslam - The Guide to Lucknow
Posted by Deepanjan Ghosh at 10:56