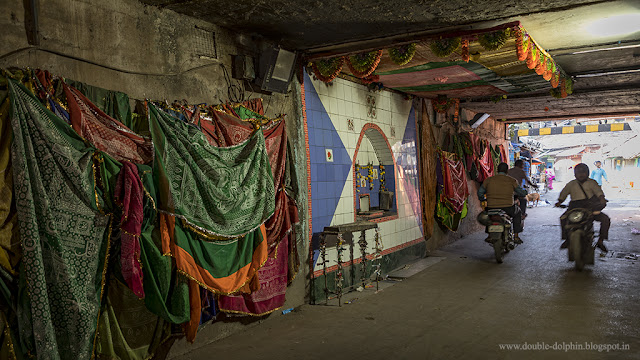 If you look at old maps of Calcutta, you will find much that has changed. Many roads aren’t how they used to be, buildings have vanished, ponds have been filled up, what used to be open fields have become apartment blocks. But one thing, in particular, makes me very curious – cemeteries that seem to have vanished. Either they are there in old maps, and not there in new ones, or I find graves and tombs in all kinds of odd places in the city. Either people don’t know, or they don’t notice the tombs. These are the invisible cemeteries of Calcutta, hiding in plain sight. How many such cemeteries are there? You’d be surprised to know.

Nazrul Mancha, adjacent to the Dhakuria Lake or Rabindra Sarobar is the venue for concerts such as the Dover Lane Music Conference. Rabindra Sarobar remains one of the most poorly documented areas of Calcutta and information about its history is sketchy at best. The lake was excavated in 1920 by the Calcutta Improvement Trust under the leadership of Cecil Henry Bompas, which led to it being initially named Bompas Lake. What is Nazrul Mancha today, began as an open-air amphitheatre that was created in the 1970’s. This was later covered to allow performances during the monsoon season and has recently been air-conditioned. But little is known of what the area was like before the lake was excavated. The mosque inside the lake predates the lake itself (read more about it here), and old maps point to a Muslim cemetery being in the area.

It is at this point that I approached Mr Somnath Ghosh. A retired bank employee, Somnath Babu is a voracious reader, has travelled the world and is something of an authority when it comes to old Calcutta. “I found in several maps that the plot of land where Nazrul Mancha stands today was a Mohammedan Burial Ground”, Somnath Babu confirmed, “at this moment I can refer to the Map No. 40 of the atlas 'Calcutta in 45 Sections' published by Map & Chart Sales Concern,  66 College Street”. Only one grave from that cemetery now remains. As one enters Nazrul Mancha from the artist’s entrance to the right, near the ladies toilet, next to a large tree, is what looks like a “bedi” or platform, covered in marble. This is in fact, the sole surviving grave. No information is available about who was buried there and why the grave was preserved. It could have something to do with the family of Saif Ahmed, who owns the Lake Mosque, but there is no evidence about that. Most youngsters who visit Nazrul Mancha for a college fest or rock concert, have seen the grave but are unaware of what they are looking at.

The only record of the Jews Burial Ground on Colootolla Street (now Maulana Shaukat Ali Street) is found in the famous Simms map of Calcutta, which is for survey years 1847-49. The burial ground is to the East of the corner of Harinbari 1st Lane and Colootolla Street, one building over. But a google maps image reveals that the spot presently has a building! I went down there to have a look with my friend Iftekhar Ehsaan of Calcutta Walks and found that there was nothing remaining of the old cemetery. The building that had taken its place was a commercial building that was locally known as “Kabristan Bazar”, meaning cemetery market! Old timers remembered a cemetery being there but say that it was cleared and the land was acquired by the current owner on a 99-year lease. But that is where the trail ends. Calcutta’s Jewish Board has no records whatsoever of this cemetery and I haven’t managed to find out who it was who leased out the cemetery’s land.

The so-called “Jews Burying Ground” on 24 U.C. Banerjee road is surprisingly well maintained and almost completely unknown. The only known documentation of this was done by Rabbi Ezekiel Musleah for his book “On The Banks of the Ganga: The Sojourn of the Jews in Calcutta”. Musleah found 7 graves of which 2 were of children. All the graves remain in good shape, but what was once a cemetery is now the courtyard of a man’s house! Even more shocking, the man and his family offer daily prayers at the graves in the Hindu fashion, with marigold flowers and incense sticks!

From Rabbi Musleah’s book, it appears one of the women buried there was named Geula/Geala, daughter of Nissim Itzhak Avraham. That particular grave seems to be from around 1932. Most of the other tombstones are presently either illegible or are concealed by cement applied for repairs. The cemetery is presently cared for by the Das family, who are Bengali Hindus and claim to have been given the responsibility of caring for the graves around the time of independence. They also say that they were contacted by members of the families buried here some years ago, asking for a soil sample that would be placed in the memorial in California, which they dutifully sent. The original cemetery gate is still in place, and hidden behind an electrical connection box is the old plaque which says “Jews Burying Ground, No. 59”.

“I met some persons who were eyewitnesses of horrible scenes of human bones coming out of the ground while excavating for building foundations, resulting in panicky masons refusing to work anymore. Sukumar Sen mentions in his book 'Diner Pare Din Je Gelo' that the entire area around Hari Nath Dey Road and Yogipara Lane was a kabar khana”. Armed with this tantalising piece of information from Somnath Ghosh, I visited Hari Nath Dey Road and found that he was absolutely correct. The sole surviving grave from this cemetery is now a “mazaar” of “Hazrat Mehtab Ali Shah Baba”, located at the crossing of Hari Nath Dey Road and Yogipara Lane. Local Muslims are aware that the area was once a cemetery, but cannot provide any more details about the man Mehtab Ali Shah or when he died. It is likely that the villages in the area were all originally Muslim. Even today, there are several old mosques in the area and the Nakhoda Kabristan, where freedom fighter Maulana Azad’s father is buried, is also close by.

One of the strangest cases is that of the “Pir Baba Ka Darga”, which is located under the Narkeldanga railway tracks! Old maps prove that the tracks were built over what was once a Muslim cemetery. Local legend says that no matter how hard the engineers tried, a particular portion of the track that was elevated above a street, would keep collapsing. Then a local man told them that a certain “Pir” or Holy Man was buried right under the spot where they were having trouble, and until his memory was honoured in some way, the bridge would never be completed. The engineers, being God and deadline fearing men, built a recess right into the wall of the tunnel under the track marking this spot, the tracks held, and all was well.

Over time, that little recess has become the object of some serious veneration, and in a touching demonstration of communal harmony, the spot now contains both Hindu and Muslim religious symbols and people of both faiths worship there. The Pir Baba’s real name is not known. Neither is anything known about his life or when he died. All I could find out from locals was that his Urs, or festival, was on the 15th of July and attracted a large crowd. Throughout the day, people pass the little shrine, often stopping to leave offerings of sweets and pouring coconut water into a hole built into the recess. The Baba, it is said, grants wishes and I was told that a woman who had been childless for many years, was blessed with a little bundle of joy after praying to him. The Lord works in mysterious ways!

It was a narrow local road that was widened and realigned to carry traffic from the Vidyasagar Setu, which was only opened in 1992. However, what made this particular grave special, is unknown. The grave is presently completely covered in marble and is at a lower level than the surrounding road. Locals throw money on it, which would mean that they consider Sheikh Ishaq Ali to be some sort of holy man. It would be fascinating to trace his family and find his details. They may still be living around the same area.

The Kaseabagan Muslim Cemetery has disappeared entirely. In its place stands Woodburn Park and the Calcutta South Club. Thankfully, a detailed record of it is available in P. Thankappan Nair’s book “A History of Calcutta’s Streets”. The cemetery “was given as a wakf to the Muhammadan community by Nawab Saadat Ali Khan Bahadur, the last independent ruler of Oudh”, writes Nair (read about Saadat Ali Khan's tomb here). “It was closed in July 1858 on sanitary grounds and the Commissioners provided another cemetery at Tiljola, at a cost of Rs. 4272”. In 1888, the Muslim Burial Board approached the Chairman of the Corporation to demand that the old cemetery be saved from encroachment and preserved, and ultimately 1903, a portion of the land was handed over to the corporation to be converted to Woodburn Park, named after Sir John Woodburn KCSI, Lieutenant governor of Bengal from 1898 to 1902. The interesting thing is that the colonial government in 1901 sued a certain Fazlar Rahman, who was, it would seem, illegally occupying a portion of the land. The suit was compromised and Fazlar was left in possession of 12 bighas of the land. Woodburn Park occupies 19.5 bighas. The cemetery was originally 37 bighas. It doesn’t add up, does it? And how did South Club get into this? Haven’t the foggiest, old chap!

Does an abandoned Hindu cremation ground belong on a list of abandoned cemeteries? It does if it contains tombs! I discovered the Tarpan Ghat Shoshaan quite by accident. I was in Pran Krishna Chandra Lane photographing the Kamarghat Dwadosh Shibmandir (read about it here), when locals approached me and told me about it and volunteered to show me around. Tarpan Ghat Shoshaan is located right next to the Tolly Canal, which is also known as the Adi Ganga since this was the original course of the Ganges. All along the Adi Ganga, there are temples and crematoriums, including the Keoratala and Shiriti crematoriums which are modern and active.

Tarpan Ghat Shoshaan, locals say, had been abandoned for a long time. But it was a favourite with Tantrik practitioners, who would use the space for meditation. Several of these tantriks are buried within the premises. But don’t Hindus burn their dead? Not all of them. Sadhus, holy men, ascetics are often buried and that too in a seated position, which explains why the markers on their tombs are square and not rectangular. The crematorium premises have been walled off by locals to save the land from squatters and it is currently used for social functions and marriages. There are two temples dedicated to the Goddess Kali within the premises, and one of them has an actual human skull at the feet of the idol.

- by Deepanjan Ghosh (with inputs from Somnath Ghosh)

MORE ON THE CEMETERIES OF CALCUTTA (KOLKATA)


Musleah, Ezekiel - On The Banks of the Ganga: The Sojourn of the Jews in Calcutta
Posted by Deepanjan Ghosh at 09:01