Me and my friend Amartya were on one of our Sunday morning rounds of the city when we stumbled upon Hastings Chapel. We do this almost every Sunday, walking the streets of Calcutta, with our cameras, photographing heritage buildings, and often discovering things that we never knew about. This was one of those things. 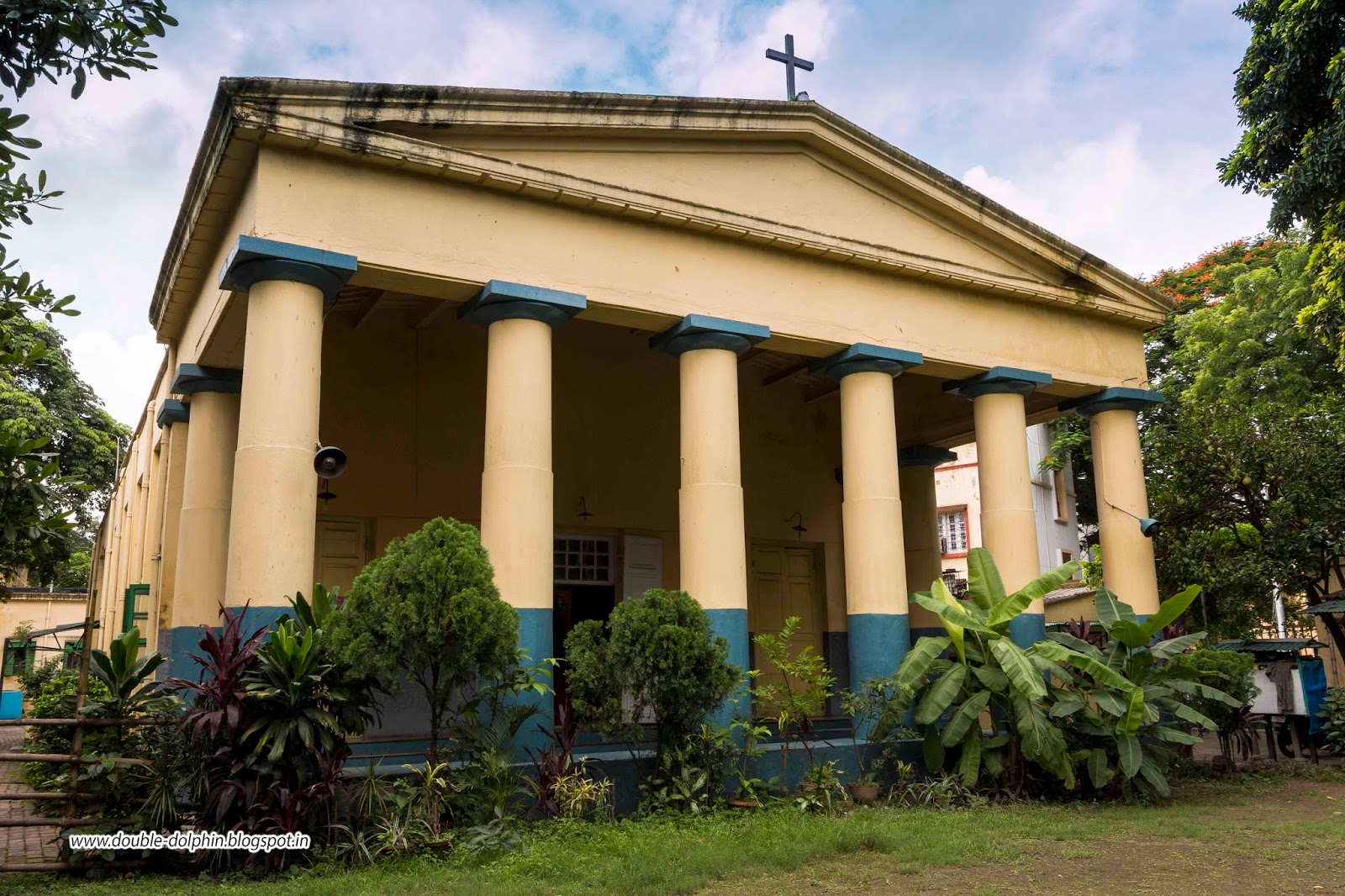 Located on the corner of Clyde Road and Strand Road, the Hastings Chapel is a rather simple and straightforward affair, architecturally speaking; a pediment, supported by 8 Doric columns, painted yellow and blue, with a simple cross atop the pediment. In front is a small and somewhat unkempt garden. Walk in and you find an almost Spartan atmosphere. The Altar is lacking in any ornamentation as is the rest of the church. Elegant and slim columns support the beams of the flat roof. To the right of the altar is a piano, which was being beautifully played for the Sunday mass. Immediately to the right of the door, on the wall are four marble plaques, to commemorate four souls. There is one to Mary Sophia, who, we are told was the wife of the Rev. T.E. Slate, who was the pastor of the congregation worshipping in this chapel. There is one to Mrs. Mullens of Bhowanipore, who died on the 1st of November, 1861. There is one to Rev. James Edward Payne, who died also in Bhowanipore, in 1886 and was twice the pastor of the Church, and finally one to the Rev. John Henry Parker, who also died in Bhowanipore in 1858. Nothing more than this, not a single scrap of information, could we find when we were there. I came back home dissatisfied and determined to do some digging.

This would be a good place to acknowledge the invaluable assistance provided to me in this matter by Ruma Debnath. Many years of devotion to the Church have given her a special talent in such matters. We had picked up a little pamphlet on our way out, which told us that Hastings Chapel was now being run by the United Missionary Church. Through contact information provided on that pamphlet, Ruma was able to contact a priest from the UMC who tells us that the Church was meant for use by the officers of the East India Company, and post the mutiny of 1857, the British Raj. That is not difficult to believe, given that the nearby area contains a naval station, the INS Netaji Subhash. The Church eventually fell into disuse and for many years, remained abandoned, and was taken over by the United Church of North India in 1956. They, in turn, leased it to the UMC. A Church leasing a Church to another Church? Whoever’s heard of such a thing?!

A few more missing details are filled in by Prasenjit Das Gupta’s book “Ten Walks in Calcutta”. The Church was probably built in the 1840’s, and its foundation stone was probably laid by Lady Bentinck. The key word in the previous sentence is “probably”. When originally built, it was meant to serve the large number of seafaring people coming to Calcutta, through the docks in Kidderpore and Garden Reach. It was originally set in much larger grounds, but that has been appropriated by the Ordinance Factory Housing Estate which now stands next to the Church. Richard Barwell, the man who leased the grounds of the old St. Anne’s Church to Thomas Lyon for constructing Calcutta’s iconic Writers’ Building, lived close to this place. Was he a congregant of Hastings Chapel? Who knows?

Another thing that bothered us right from the time we walked into the Hastings Chapel was its spartan look. Old Churches have wooden benches. Made from heavy teak, these benches last much longer than people and many Churches in Calcutta still have the original benches from when they were built. Here, we found modern steel chairs. The benches, the priest says, were “removed”. Removed? Does he mean stolen? He is unwilling to elaborate further. Same goes for the marble on the floor; removed and replaced with modern cement. How very curious!

Poring over books and trawling the internet produced no further results. Attempts to contact the UCNI did not prove fruitful either. If you happen to know more about this Church, drop me a line, will you?