I discovered Bose House in Serampore purely by chance. Actually even using the word “discovered” would be inaccurate. It would imply that I came upon something, and knew what it was. I did not. I was doing my rounds of Serampore, taking photographs of the town’s colonial era buildings, and just happened to drive past the building on 22, T.C. Goswami Street. I was struck both by the size and obvious magnificence of the structure, and it’s almost frightening decay. I told the chauffeur to pull over, and entered to take some photographs that I was pretty certain I would never use. 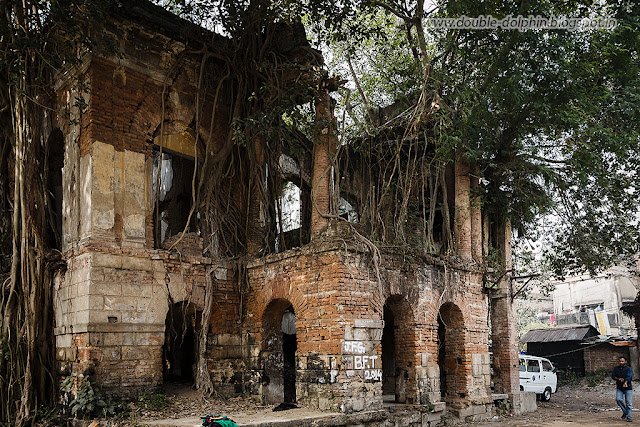 Inside the compound was parked an auto-rickshaw (or Tuc-Tuc if you will), and an ambulance. The people driving these vehicles were nowhere to be found, but there was a group of men inside, sitting in a circle and smoking marijuana from a chillum. They didn’t look like violent, crime-prone junkies, but they were somewhat startled by my intrusion, and had initially thought I was a policeman. Upon my assuring them that I was not, their genial smiles returned. They noticed my rather bulky camera, and asked if I was from the press. They even offered me the chillum, which I politely declined. They had just come back from a pilgrimage to Tarakeswar, they said, and since marijuana was the intoxicant of choice of Lord Shiva, the object of their devotion, this was as much a religious session as it was recreational. Thankfully, short of the polite and good natured curiosity that bulky camera wielding folks provoke in small towns, they were happy to leave me to my devices. 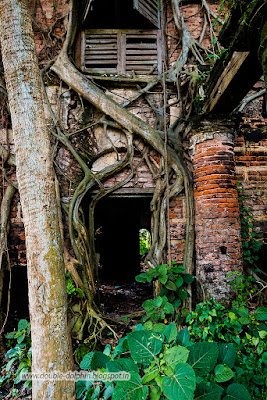 It was only much later, when I was looking at the shots of the crumbling mansion, and trawling the internet for details on Serampore that I came across the report by Flemming Aalund and Simon Rasten that identified this as Bose House. The building shows up in a map from 1827, so it has been around for about 200 years. Decay has exposed the bricks in the walls and some parts of the building appear to have been made from “lakhori” bricks. The standard Indian brick is roughly 10X5X3 inches and was designed by the first qualified Bengali civil engineer, Nilmoni Mitra, who designed Bagbazar’s “Basu Bati”. A “lakhori” brick is slimmer and longer, and was mostly used in the 18th century. That is when some parts of this building were built, it would seem, and alterations and additions happened later. Given that time frame, this was probably originally a Danish house. The grounds attached to the building and surrounded by a boundary wall, were once probably a fine garden.

From municipal records it appears Albert, Norman, George, Samuel, Daisy, Steela (Stella?) and Grace Bose have been the residents of this building between 1947 and 1974. Bose here is almost certainly the Bengali surname, and not the German “von Bose”. The fact that all the names are Christian would seem to indicate that the Boses were native Christians. Going by the condition of the building, and how far plants have taken root, it would be safe to assume that the building has been abandoned since then. No further information could be found anywhere, and as I wandered the grounds, I tried to imagine this now ruined house as it once was. Was there a beautifully manicured garden around the house? Did children run around and play in it? Did horse carriages drive through the front gate? What were the people who lived here, like? Did they have parties on the weekends with music and food and wine? What would this house have been like when it was filled with love and laughter? 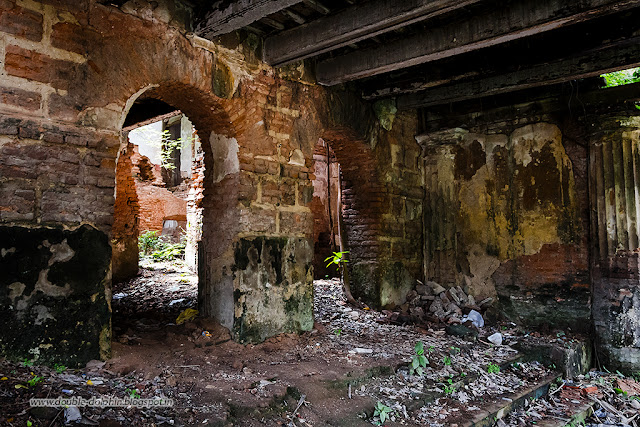 Much of Bose House remains standing and in fact, the front porch even has its fine flooring mostly intact, although large parts of the roof have collapsed. Entrance to the building is through two sets of fine pillared gateways, although the pillars are all that remain. Gates from buildings of this era were mostly cast iron, and hence valuable, so theft is not improbable. Given that the building has not been altered, and most of its original architectural features remain, it is a prime candidate for restoration, in spite of its ruined state. Perhaps it can be turned into a museum? Or even offices, if the occupants promise not to make changes to its basic character. In a town that is rapidly growing, surely, such a large space going to waste and turning into a den for pot smokers cannot be a good thing. But the usual hurdles remain. Securing funds, and most of all fighting apathy and finding people who have enough passion for such work, is a challenge. Let us see if Serampore manages to rise to it. 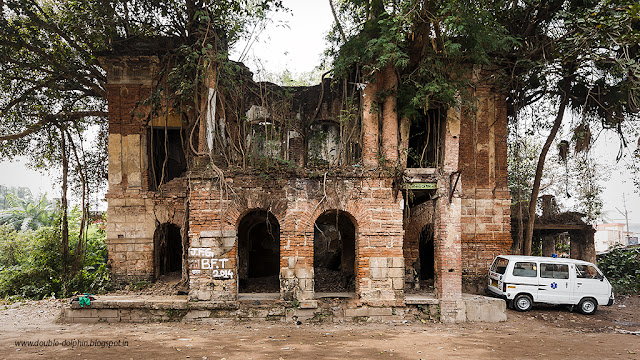