I was exploring the temples in the Chetla area of South Calcutta (Kolkata) when I found the Kamarghat Dwadosh Shiv Mandir, completely by accident. I was there with my friends Amartya, Soumyadeep and Sourav, visiting the Radhanath Temple of Mondal Temple Lane and the Baro Ras Bari and Chhoto Ras Bari of Tollygunge Road when a local walked up to us. All of us were carrying rather large cameras, so it was quite obvious what we were here for. Since we were photographing old temples, he asked us if we had seen the “Baro Shiv Mandir”, a group of 12 Shiva Temples which he assured us was quite old. With guidance from locals, all of whom were aware of the existence of the temple, we reached a large courtyard on Pran Krishna Chandra Street and found written on the wall the words “Kamarghat Dwadosh Shiv Mandir” and the date 1259, according to the Bengali calendar. 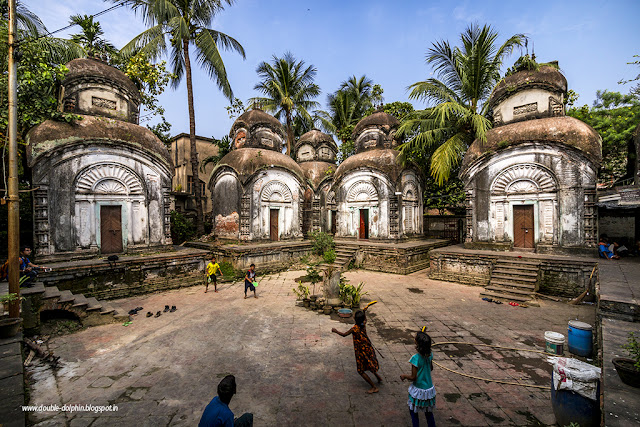 BRIEF HISTORY OF THE CHETLA AREA

The origin of the name Chetla is unknown, but passing through the area is the Govindpore Creek which was the original course of the Ganges between the 15th and 17th Centuries and is still referred to as the “Adi Ganga” or Old Ganges. The creek came to be known as Surman’s Canal after John Surman of the East India Company started living here. This was the same John Surman who had led the East India Company’s embassy from Calcutta (Kolkata) to Delhi in the summer of 1714. The protracted negotiations ended in July of 1717 with the Company being granted the right to duty-free trade in Bengal for an annual consideration of 3000 Rupees, helped in no small part by Surgeon William Hamilton curing the Mughal Emperor Farrukhsiyar of “a malignant distemper”. 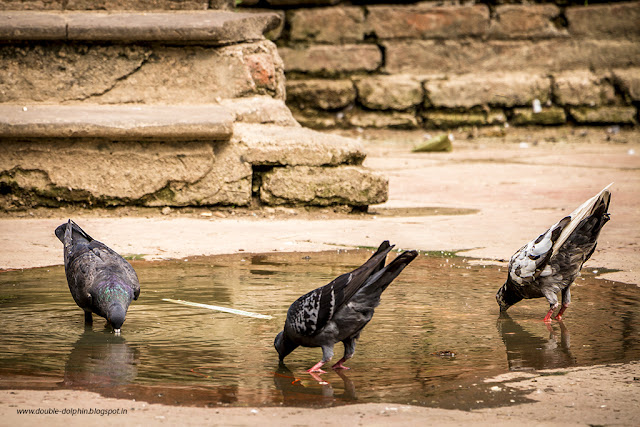 In 1775, Colonel William Tolly in a letter to the Governor General and Council of Bengal proposed to carry out excavations in Surman’s Canal to create a navigable channel from the Hooghly river to the Salt Water Lake (present day Bidhannagar or the Salt Lake City satellite township) in return for which he was granted the right to levy a toll of 1% on the invoice price of all goods that passed the canal, which now became known as Tolly’s Canal or Tolly Nullah. The old village of Russa Pagla (which gave its name to Russa Road, now Deshapran Shashmal Road) developed thanks to the Tolly Canal and is still known as Tollygunge. In his narrative published in 1831, Captain Pogson wrote that he found all along the Tolly Nullah, “bones, beds, garments and other remnants of mortality”. The Adi Ganga being sacred to Hindus, temples and crematoriums were constructed all along its course. Several of these structures have been listed by the Calcutta Municipal Corporation as heritage buildings, but they mostly continue to decay in obscurity. 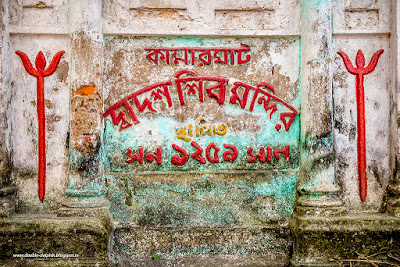 The Chandra family traces its origins back to the Kamarpara area of Behala in South West Calcutta (Kolkata). From there one Nilmani Chandra moved to Chetla, to this place which was once known as Kamarghat. Since the names of both the places contain the word “kamar”, Bengali for blacksmith, it would be reasonable to suspect that that is what the Chandras originally were. Nilmani established the temple in 1259, which would correspond to 1852 in the Gregorian calendar. From him the temple passed to his son, Prankrishna Chandra, and the street the temple stands on is currently named Prankrishna Chandra Lane. From Prankrishna the temple passed to his son Muktaram Chandra and thence to his son Pachu Gopal Chandra who is still alive today. It was Pachu Gopal’s son Subroto who met us and showed us around. Pachu Gopal and Subroto currently run a grocery shop which is located right next to the temple.

The 12 temples are built on raised plinths around a square-shaped, paved courtyard. In the centre of the courtyard is a “Tulsi Mancha”, a small raised platform with a Tulsi or Holy Basil plant in it, the leaves of which are considered sacred and to have medicinal properties. The temples occupy the four corners of the plot and the principal entrance is from the North. As you enter, notice that the temples on both sides have “fake” shuttered windows. The temples themselves are in Bengal’s traditional “aatchala” style; one square sloping roof topped with a turret with another square sloping roof. Chaal/chala = roof, each roof has 4 sides, and when you add them, 4+4=8 or “aat” in Bangla. Simple, right? There are ornamental faux columns on both sides of the doors to each temple, and above each door are ornamental arches. I don’t know if there’s a specific name for these particular arches, but you can see that exact same arch above a window on Wood Street in Calcutta (Kolkata), right behind Moksh Annexe which houses Pantaloons. 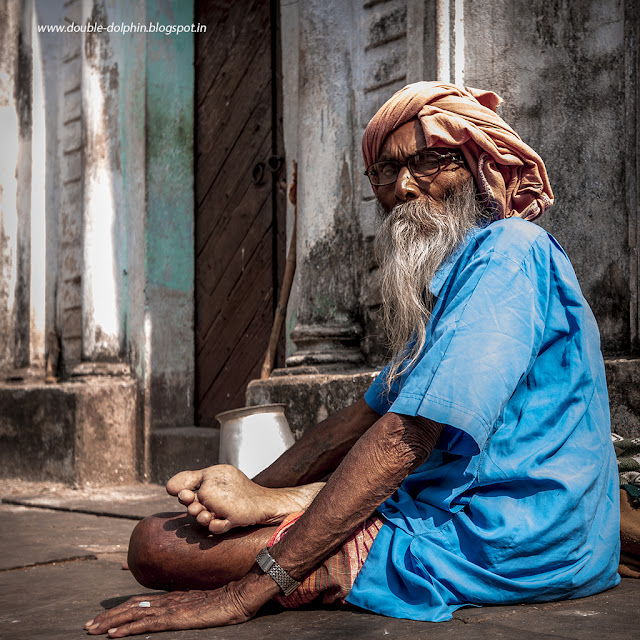 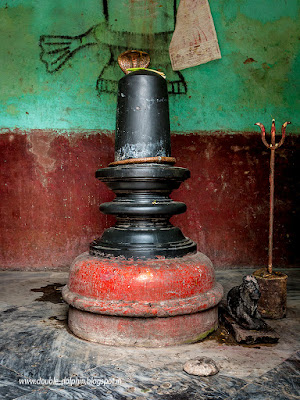 As for the present condition, the Kamarghat Dwadosh Shiv Mandir has obviously seen better days, but is far better off than many other structures from the period. In spite of their limited means, the Chandras have spent money on renovation and repairs, and structurally, the temples are sound and should continue standing for another 100 years. Inside each temple is a Shiva Linga, the phallus that is a symbol of Lord Shiva, and next to it a small statue of Nandi, his bull. The lingas themselves are spotlessly clean and shiny. Subroto Chandra says they are cleaned and polished on a regular basis. Worship happens on a regular basis as well. In the past the Chandras have been approached by various trusts who wanted to take over the temple and operate it. Often, handing over temples to such trusts will mean they will be better maintained and will generate income. The Chandras have turned them all down. “If I hand the temple over, they will restrict access”, says Subroto, “now the courtyard is a place for the children of the neighbourhood to play in. They come here every day. The adults sit and chat here. It’s community space. I would like to keep it that way”.

One very curious thing that all the children of the neighbourhood know about and will eagerly show you are the two drawings that are chiselled on to the temple’s floor and wall. One is of a parrot and another is of a girl. A kid told me that someone had shot a parrot with an arrow and had drawn its picture at the spot where it fell. If that is the story of the parrot, I shudder to think how the girl got there! And for all my friends in films and television, I have good news! The location is available for shoots, at a very nominal cost. 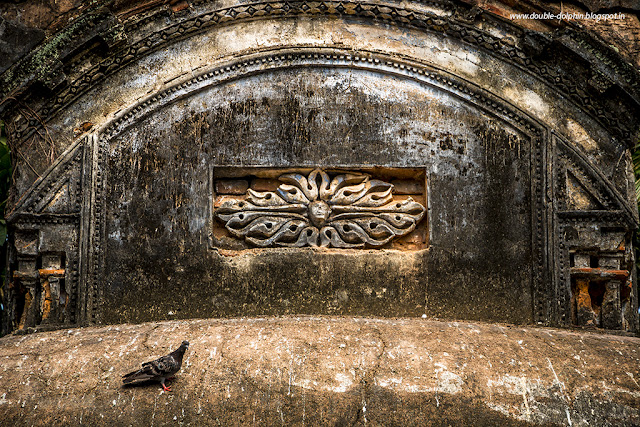 No matter which direction you come from, getting to the Kamarghat Dwadosh Shiv Mandir will involve some amount of walking. The roads in the immediate vicinity of the temple are somewhat narrow. I live in the Ballygunge area of Calcutta, so I can tell you the route I took. From Tollygunge Phari, where Tollygunge Circular Road meets Deshapran Sashmal Road, turn into Tollygunge Circular Road and proceed West. When you reach the bridge across the Tolly Canal, proceed to the centre of the bridge take the stairs down to the Western side of the canal. You will come to Canal Road, which is a narrow path along the Tolly Canal. Proceed South. Do notice a rather large, beautiful and decrepit house on your right as you pass. If you are tempted to enter, take note of a very large Doberman chained to the gate. It takes about 5 to 7 minutes at a reasonably brisk pace, to reach the crossing of Canal Road and Prankrishna Chandra Lane. From there, turn right or West and the temple should be immediately visible on your left. Alternatively, you can proceed further West from the bridge, get off and take the first turn South or left into Basanta Lal Saha Road, or B.L. Saha Road, and proceed South till the crossing of B.L Saha Road and Prankrishna Chandra Lane. At any point, if you feel lost, simply ask any local for directions to the “Baro Shiv Mandir”. Everyone in the area knows about it. Here is the place in Google Maps. 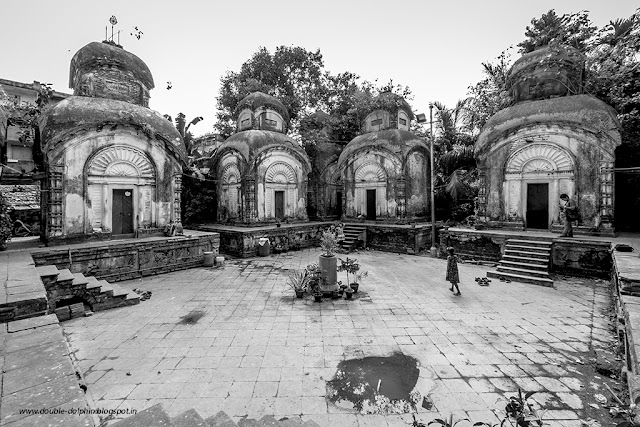 Do also note that no matter which route you take, you will be passing through informal markets, with people selling vegetables, fish and poultry by the side of the road, and even on the bridge. Expect crowds and jostling, especially in the morning. While markets can make for fascinating photographs, I am personally not fond of the smell of raw fish or poultry, so I tend to walk a little faster and breathe a little less than I normally do.

Posted by Deepanjan Ghosh at 11:17