Although the General Post Office or GPO, Calcutta’s (Kolkata) central post office, is one of the city’s best known, and most often photographed heritage buildings, there are many things about it that remain unknown to the general public. Not many people are aware that the spot where the GPO stands today, once stood the Old Fort William of Calcutta, which was the centre of violent battle when the Nawab of Bengal, Siraj-ud-Daula laid siege to Calcutta. Even fewer people are aware that a few markers of the siege of Calcutta still remain. 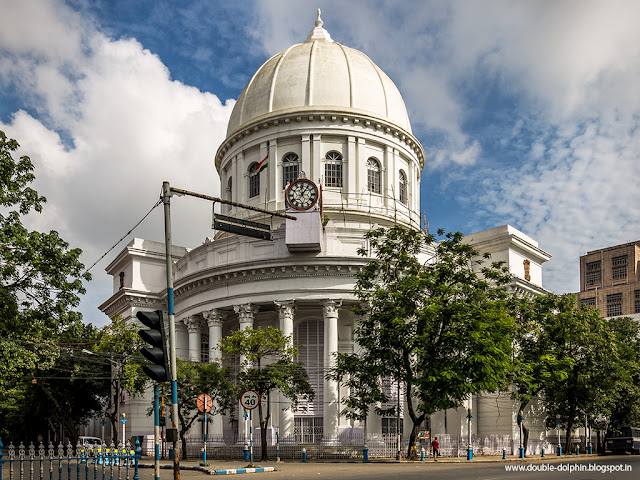 PREVIOUS LOCATIONS OF THE GPO

The General Post Office of Calcutta has shifted locations multiple times in the past. The first Post Office of Calcutta was situated on Old Post Office Street. In fact, it is what gave the street its name. From there, it moved to the corner of Hastings Street and Church Lane as is evident from Mrs. Eliza Fay’s “Original Letters from India”, published in 1817, where she mentions that the building she was living in was previously the General Post Office. The GPO remained in this building from 1774 to 1784. But as a portion of this building was pulled down and Church Lane was widened, the GPO moved again. Under Postmaster General Charles Cockerell, the GPO shifted to the corner of Lyon’s Range and Clive Street (now Netaji Subhas Road) on the 1st of November 1784. This site would later be occupied by James Finlay & Company. Their white and blue building is currently occupied by Allahabad Bank. 6 years later, on the 1st of April 1800, the GPO moved to the site of the Old Harmonic Tavern, which is now the Lalbazar Police Headquarters. From here it was shifted again on the 5th of May 1808 to 2 Bankshall Street, close to the old Ice House, where the Small Causes Court now stands. Of this building, Montague Massey writes in his book “Recollection of Calcutta for over Fifty Years” that “…it was no longer in existence at the time of the great cyclone of 1864…it was a low-roofed, one-storeyed building, having a decidedly godownish appearance, fenced in on the south side, which was the entrance, by a row of low, green-painted palings with an opening in the centre”. From here the GPO would make its last and final move to the corner of Koila Ghat Street and Charnock Place (now Netaji Subhas Road). 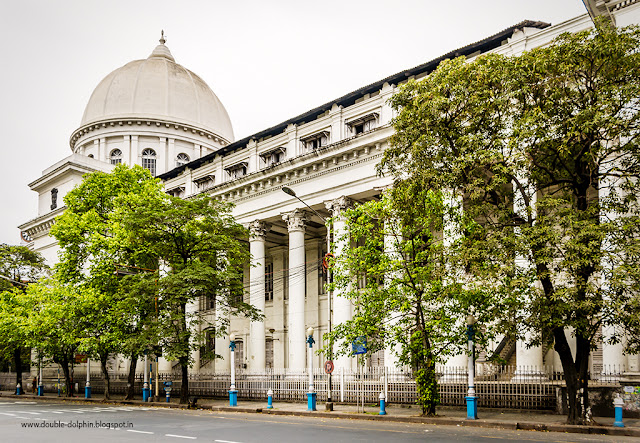 ARCHITECTURE OF THE GPO

The present General Post Office was designed by Walter L. B. Granville who has also designed Calcutta’s High Court, the Indian Museum in Calcutta and the All Souls Memorial Church in Cawnpore (Kanpur). It was constructed by Mackintosh Burn Ltd., and cost Rs. 6,30,510. Construction started in 1864 and was completed on 2nd October 1868. The stand out architectural feature of the GPO is its lofty dome on the South East Corner. The dome is supported by 28 Corinthian columns. The tower itself is nearly 120 feet in height. Outside the dome is a multi-dialled illuminated clock. The clock was installed in 1896 and was manufactured by the same company that made the Big Ben clock in London. It was imported at the cost of Rs. 7000. The ground floor of the GPO covers 49,471 square feet while the 1st floor covers 29,713 square feet. The Post Master General’s office was on the 1st floor once, while the Presidency Post Master occupied the ground floor. At the back, to the West, is a yard for mail vans and on the Southern side is the philatelic bureau where philately enthusiasts can pick up newly issued stamps and first-day covers. 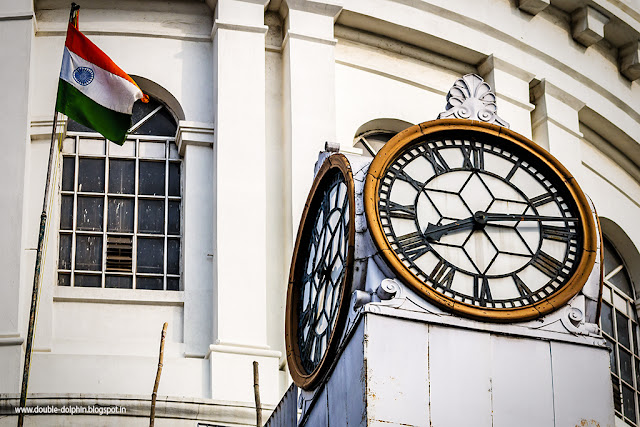 THE GPO AND THE BLACK HOLE OF CALCUTTA

Not many are aware that the General Post Office of Calcutta stands on the South East corner of what was once the first Fort William of Bengal. Construction of the old Fort William began around 1696 and continued through 1706. The fort housed, among other things, the East India Company’s factory, the Governor’s mansion, living quarters for the employees or factors of the company, and various offices and godowns. The Nawab of Bengal at that time was the young and hot-headed Siraj-ud-Daula and when it came to his notice in the mid-1750’s that the British were adding military fortifications to the structure he demanded that they be taken down. The equally hot-headed and arrogant governor of Fort William, Roger Drake wrote to the Nawab basically asking him to get lost. The enraged Nawab attacked Calcutta with a force of 50,000 men and laid waste to the city. On 20th June 1756, the victorious Nawab entered Fort William and ordered all prisoners to be confined for the night. The Nawabs underlings were used to carrying out orders verbatim and ended up confining 146 people in a room measuring 18 feet by 14 feet. This room was the Black Hole Prison. It was located along the Eastern curtain wall of the fort and was completely bricked up, save for two very small, barred windows. Roger Drake had fled the fort during the fighting and the Europeans in the fort had chosen a surgeon, John Zephaniah Holwell as the acting governor. According to Holwell, 123 of the 146 people confined to the Black Hole Prison died in the course of the night through dehydration and suffocation. Among the victims was Stair Dalrymple, ancestor of historian William Dalrymple. This event, known as The Black Hole Tragedy, remains controversial and deeply contested to this day, with many scholars arguing that it never happened at all. However, the location of the Black Hole Prison, or that fact that such a room did indeed exist, has never been challenged.

After the East India Company re-took Calcutta from Siraj-ud-Daula’s forces, Fort William was moved to its present location, and the Maidan was created around it to provide a clear field of fire in case of future attacks. The Old Fort William was slowly dismantled over time, and its place was taken by The GPO, the Collectorate Building, the old Customs House and the Fairly Place Railway Office. Several civil servants attempted over the years to retrace the location of the old fort and the Black Hole, but the most successful of them all was C.R. Wilson, who in 1891, using a recently discovered 1753 map of Calcutta drawn by Lt. Wells, traced the bastions, curtain walls, and finally the Black Hole prison of the old Fort William. On his way to take charge in Calcutta, Lord Curzon, the newly appointed Viceroy of India, was reading about the Siege of Calcutta in Sir Harry Evan Auguste Cotton’s book “Calcutta Old and New”, and decided to have the Old Fort William’s location marked using brass lines on the pavement and marble plaques on the walls. Of the 12 tablets that Curzon had placed around the spot, only 3 remain visible to the public, one of which is on the walls of the GPO. The brass lines are all gone, except the ones on the Eastern steps of the GPO.

REMAINS OF OLD FORT WILLIAM INSIDE THE GPO 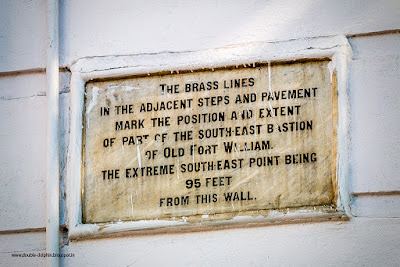 In the yard meant for mail vans, were brass lines on the ground that marked the position of the south curtain wall of the Old Fort William. I doubt these lines still exist although a marble plaque on the wall that mentions them should still be there. The area is not accessible to the public. Inside the yard once stood two lines of 12 arches, which was all that remained above ground of the Old Fort William in 1901. On the Eastern steps of the GPO, brass lines may still be seen, and at the end of the steps, on the wall on the Northern side may be seen a plaque with the following text…

THE BRASS LINES IN THE ADJACENT STEPS AND PAVEMENT MARK THE POSITION AND EXTENT OF PART OF THE SOUTHEAST BASTION OF THE OLD FORT WILLIAM, THE EXTREME SOUTHEAST POINT BEING 95 FEET FROM THIS WALL 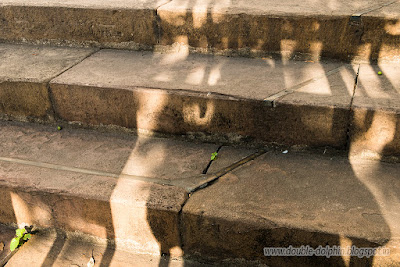 A bastion is a portion of a fort wall that projects forward. It strengthens the wall and provides a position for gunners or archers to shoot down anybody attempting to scale the wall. If you proceed further north from this point, along Charnock Place (now Netaji Subhas Road), with the GPO on your left, you will come to a narrow passage between the GPO and the Collectorate. This is where the Black Hole Prison used to be. Curzon had the spot paved and surrounded by a metal railing. He had a tablet placed there with the following text…

THE MARBLE PAVEMENT BELOW THIS SPOT WAS PLACED HERE BY LORD CURZON, VICEROY AND GOVERNOR GENERAL OF INDIA, IN 1901 TO MARK THE SITE OF THE PRISON IN OLD FORT WILLIAM KNOWN AS THE BLACK HOLE IN WHICH 146 BRITISH INHABITANTS OF CALCUTTA WERE CONFINED ON THE NIGHT OF THE 20TH JUNE, 1756, AND FROM WHICH ONLY 23 CAME OUT ALIVE

This tablet is gone, as is the marble pavement and railing and the spot was being used as a garbage dump until very recently. The following photographic comparison will make the position of the Black Hole clear.

Blogger Rangan Datta tells me that inside the GPO he had once seen a tunnel, leading, he assumed, to the Ganges. Many of the buildings in the Dalhousie Square area have such mystery tunnels. Their exact function remains unclear. Thousands of people come to the Dalhousie area for work every day. How many of them are aware of the history of the place I wonder? How many are aware of the Battle of Laal Dighi? How many are aware of what lies under Calcutta’s magnificent General Post Office?

MORE ON THE BLACK HOLE OF CALCUTTA

My thanks to blogger Soham Chandra and Somnath Ghosh for details about the GPO clock. Check out Soham’s blog, also about Calcutta’s history and heritage buildings, here.