The little town of Khuldabad in the Indian state of Maharashtra was known as Roza or Rauza meaning garden of paradise thanks to the large number of Dargahs or tombs of Muslim saints that it is home to. But apart from the saints, there are also two other interesting tombs. One is of a royal while another is of a warrior. One is well known while the other is obscure. But around both, a Mughal Garden was originally laid out. Armed with Pushkar Sohoni’s book on Aurangabad and Khuldabad, I set out in November of 2015 to find these gardens. But before I tell you the story of my quest, let me tell you about what a Mughal Garden is.

One of the first acts of Mughal Emperor Babur, when he arrived in India to stay in 1526, was to construct gardens to make “that charmless and disorderly Hind, more like home”. By “more like home” he was referring no doubt to the Persian gardens of Uzbekistan where he was born and grew up. Built by Babur’s illustrious ancestor Timur, these gardens were walled, enclosed spaces for relaxation and meeting with friends. The word used to describe such gardens was “pari-daiza” from which we get the Arabic “Firdaus” and English “paradise”. These gardens were supposed to be a sort of paradise-on-earth and evolved slowly into the Persian “charbagh” o “chahar bagh”, literally meaning four gardens. The charbagh was a garden divided into four quadrants by water channels. Those four quadrants would represent earth while the water channels were representative of the four rivers of Eden. As the Mughal Empire expanded the Persian garden that Babur had brought with him, turned into the Mughal garden and spread through the land. The most well-known example of this is the one that surrounds the Taj Mahal. In Mughal India creating a charbagh around a tomb was a fairly common practice.

The Jahan Banu Begum Bagh (also spelt Zahan Banu Begum or Bani Begum), is located at the Western end of the walled city of Khuldabad. Measuring approximately 115 square metres, the garden is surrounded by a high wall. A large portal on the Northern wall serves as the entrance. The garden is divided into four parts by the central water channel, and smaller water channels subdivide it further. In the centre of the Eastern, Western and Southern walls are 3 baradaris. A baradari is another feature typical of Mughal architecture. Bara means 12 and dari comes from the word dwar, meaning door. So a baradari is a structure with 12 doors. Each of these structure has 5 scalloped arches on the front. There are 5 more in the rear, and 2 each on each side. 2 of the baradaris have recently been renovated by the Archaeological Survey of India. But inexplicably, they have left one in its old dilapidated state.

In the centre of the garden is another enclosure, which is surrounded by four kiosks with “bangla” roofs. They are called “bangla” roofs because this element comes from Bengal. The roof is shaped like a thatched hut, and such roofs are commonly seen in Bengal’s temples. It has been incorporated into many structures across India, including the Mysore Palace. There is an interesting ribbed pattern on top of each roof which, however, is definitely not from Bengal and is probably a Mughal innovation. The kiosks have 3 scalloped arches on each side, the central one being larger than the two on each side. Inside each kiosk, there are steps leading inside the enclosure which is set at a lower level than the garden. In the centre of the enclosure, on an octagonal plinth lies the grave of Jahan Banu Begum. She is mentioned in various sources as the daughter-in-law or granddaughter-in-law of Emperor Aurangzeb. No other specifics, such as dates of birth and death or even name of husband, are available. But she must have been someone important to warrant such an elaborate memorial. The structures inside Jahan Banu Begum Bagh are said to have been covered in marble, which locals, over the years, have stripped away, leaving only masonry and red stone.

THE HUNT FOR LAL BAGH

Jahan Banu Begum Bagh was easy to find. Locals knew about it, as did my chauffeur, Anand Diwekar. But Lal Bagh proved much more elusive. I got absolute blank expressions from locals when I asked: “Lal Bagh kaha hai”. In fact, I would never even have known about it, if Pushkar Sohoni had not mentioned it in his book. Frustrated, I finally pulled out Sohoni’s book and shoved the photograph of Lal Bagh in a man’s face. “You see this? Where is THIS”? A faint glimmer of recognition; “Ah yes! Is this called Lal Bagh? But what you see in the photo, that is all that is left. There is nothing else to see”. As it turned out, I had already driven past Lal Bagh several times without realising it. As you enter Khuldabad through the Southern gate, you actually cross Lal Bagh on your left, or West, before you get to Aurangzeb’s tomb.

Lal Bagh contains the tomb of Khan Jahan Bahadur, an officer under Aurangzeb, who participated in the Mughal war against Jodhpur in 1679. On two occasions he served as Aurangzeb’s Viceroy for the Deccan region. I could find no other details about his life (or death) and it seems like whatever little is left of him, is on its way to complete obliteration. The local who had given me directions to the tomb had told me that it was now surrounded by a Muslim slum, but that did not prepare me for the kind of chaos that I found, with chickens, goats and people inhabiting the same (rather small) space. But people in such places are often kind and polite, and when I asked them for directions to the tomb, I was promptly shown the way, through the jigsaw puzzle of homes and chicken coops.

Lal Bagh is completely overgrown with weeds and looks like it has seen not even the most basic maintenance in 20 years or more. The domed tomb of Khan Jahan Bahadur is battered and bruised. The plaster has fallen off, the bricks are exposed and the jaali screens set in the walls are shattered. The interiors of the dome are in somewhat better shape, with some of the beautiful decorations in red and green on the walls and the drum of the dome still surviving. There are three graves inside the dome. Two are large adult graves, one red and one white. Both have beautiful engravings on them, covered in a thick layer of dust. I assume one of these must be Khan Jahan and the other his wife. But there is one more, smaller grave, which is almost certainly that of a child. Did Khan Jahan’s wife die in childbirth? It was very common back then.

Lal Bagh also clearly follows the Char Bagh pattern, with water channels made of stone. On the Western side of the garden, is a tiny mosque that has, unfortunately, lost all its “heritage” qualities thanks to “renovation”. It is now painted a painfully gaudy green. Inside we found a local in prayer. He was surprised to see visitors and asked us how we found the place. The last time he had seen Lal Bagh in good shape, he said, was in the 1980’s. So why is this place withering away? Why has only one Mughal garden in Khuldabad received the ASI’s attention and not other? And how come we know so little about both Jahan Banu Begum and Khan Jahan Bahadur? To these questions, I have no answers.

NOTES FOR VISITORS AND PHOTOGRAPHERS


The top view from Google maps makes things look relatively simple. Aurangzeb’s tomb on the left, Lal Bagh (labelled in red) to the left of it, and further left, Jahan Banu Begum Bagh (labelled Banu Megum Mogul Garden). Things are somewhat different on the ground, though. You take the road North till you reach a crossroads, and then turn left to reach Jahan Banu Begum Bagh. The traffic, while not heavy, can be somewhat chaotic. There are no restrictions on photography at either of the locations. Officially ASI does not permit the use of tripods at its locations, but here, there is no one to enforce that rule. However, do keep in mind that you will be walking through a slum to enter Lal Bagh. Be careful what you are stepping on, because you will, for all practical purposes, be walking through people’s front and back yards. You may get a few stares; people aren’t used to tourists at Lal Bagh, but treat them with respect and dignity, and they will return the favour. 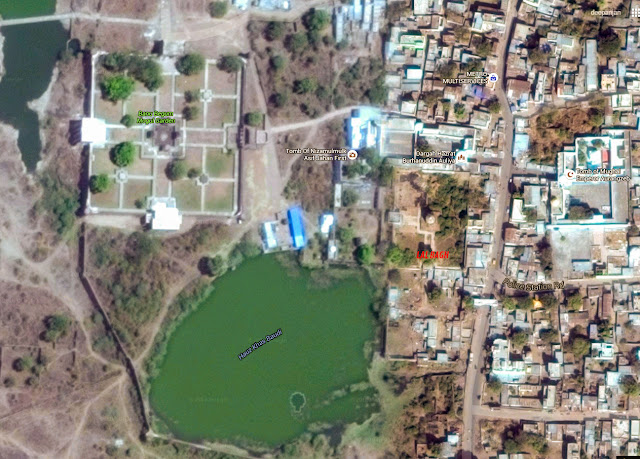 CONCLUSION – ALL GLORY IS FLEETING

One of the things that I have picked up over the last few years is to always include personal impressions when writing about a place. But my personal impressions of the Mughal Gardens of Khuldabad are not very different from those of say, South Park Street Cemetery. Whenever I walk away from one of these sites, where the legacy of great men has been reduced to a few pieces of crumbling brick and mortar, a movie comes to mind; the closing moments of the 1970 Hollywood film, Patton. George C. Scott, as General George S. Patton Jr., walks away from the camera, towards the distant snow-capped mountains. WWII is over, and although it is primarily through his efforts that Europe has been liberated, he has now been cast aside by his government and his army. In the background, we hear Scott’s voice, “For over a thousand years Roman conquerors returning from the wars enjoyed the honour of triumph, a tumultuous parade. In the procession came trumpeteers, musicians and strange animals from conquered territories, together with carts laden with treasure and captured armaments. The conquerors rode in a triumphal chariot, the dazed prisoners walking in chains before him. Sometimes his children robed in white stood with him in the chariot or rode the trace horses. A slave stood behind the conqueror holding a golden crown and whispering in his ear a warning: that all glory…is fleeting”.

MORE STORIES ON KHULDABAD AND AURANGABAD